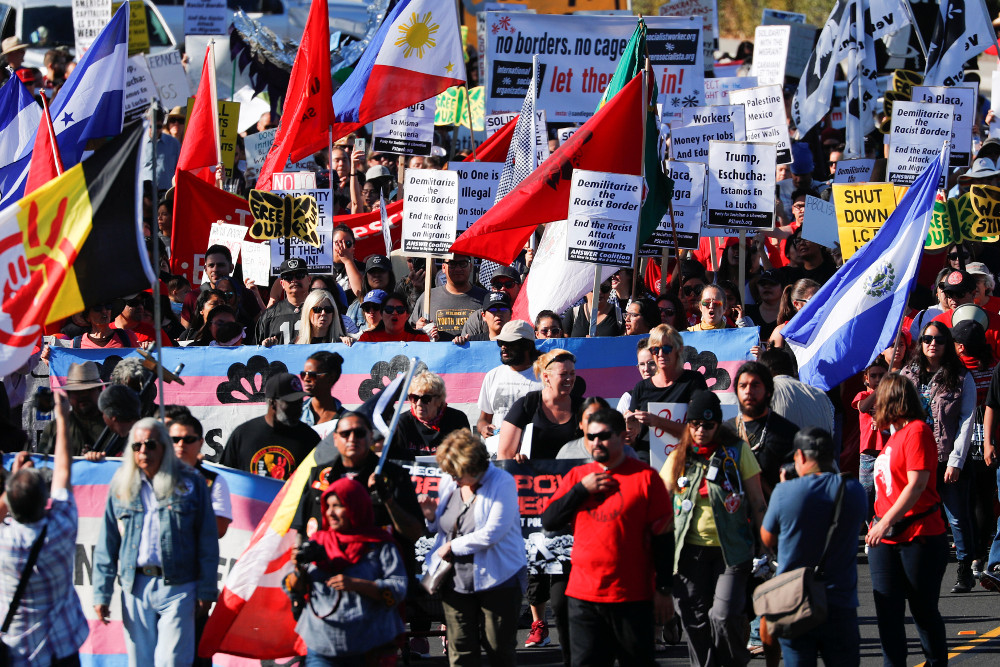 Protesters supporting the migrant caravan in Tijuana, Mexico, march next to the border wall with Mexico in San Diego. (CNS/Mike Blake, Reuters)

In today's climate of mistrust, rejection and nationalism, the world urgently needs peacemakers and politicians who protect and lovingly serve others, Pope Francis said in his annual message for the World Day of Peace Jan. 1.

"Terror exerted over those who are most vulnerable contributes to the exile of entire populations who seek a place of peace," he said, and "political addresses that tend to blame every evil on migrants and to deprive the poor of hope are unacceptable."

Instead, political life can and should be "an outstanding form of charity" when it is exercised with a "basic respect for the life, freedom and dignity of persons," the pope said.

Holding political office and having political responsibility "constantly challenge those called to the service of their country to make every effort to protect those who live there and to create the conditions for a worthy and just future," he said.

"One thing is certain: good politics is at the service of peace," Pope Francis wrote. "It respects and promotes fundamental human rights, which are at the same time mutual obligations, enabling a bond of trust and gratitude to be forged between present and future generations."

The pope's message, which focused on "good politics at the service of peace," was released Dec. 18 at a Vatican news conference led by Cardinal Peter Turkson, prefect of the Dicastery for Promoting Integral Human Development.

Peace is a gift freely offered by God to all people, who are then called upon to be open to peace and to cooperate, making peace real in one's home, family, community and country, the cardinal said.

The pope's message, which the Vatican sends to heads of state around the world, invited politicians in particular to manage and administer resources for the well-being of "all dwellers in the house," Turkson said.

Pope Francis' wish and prayer for peace in 2019, he said, "is that politics — this oversight, through policies and laws, of resources of domestic, national and global households — may bring peace to all the citizens of the households, especially its youth, who may not be robbed of their hope in the future, because politics is so badly done that it deprives them of peace."

In his message, Pope Francis said politics is the essential path for building up a "human community and institutions, but when political life is not seen as a form of service to society as a whole, it can become a means of oppression, marginalization and even destruction."

"The thirst for power at any price leads to abuses and injustice," he said, highlighting the harm caused by "political vices."

"Whether due to personal incompetence or to flaws in the system and its institutions," the pope wrote, political vices "detract from the credibility of political life overall, as well as the authority, decisions and actions of those engaged in it."

"These vices, which undermine the ideal of an authentic democracy, bring disgrace to public life and threaten social harmony," he said.

Such vices include "xenophobia, racism, lack of concern for the natural environment, the plundering of natural resources for the sake of quick profit and contempt for those forced into exile," he said. They also include many forms of corruption: "the misappropriation of public resources, the exploitation of individuals, the denial of rights, the flouting of community rules, dishonest gain, the justification of power by force or the arbitrary appeal" to national interests and the "refusal to relinquish power."

War and "the strategy of fear" are also contrary to politics at the service of peace, he said.

"To threaten others is to lower them to the status of objects and to deny their dignity," which is why any "escalation of intimidation and the uncontrolled proliferation of arms is contrary to morality and the search for true peace." 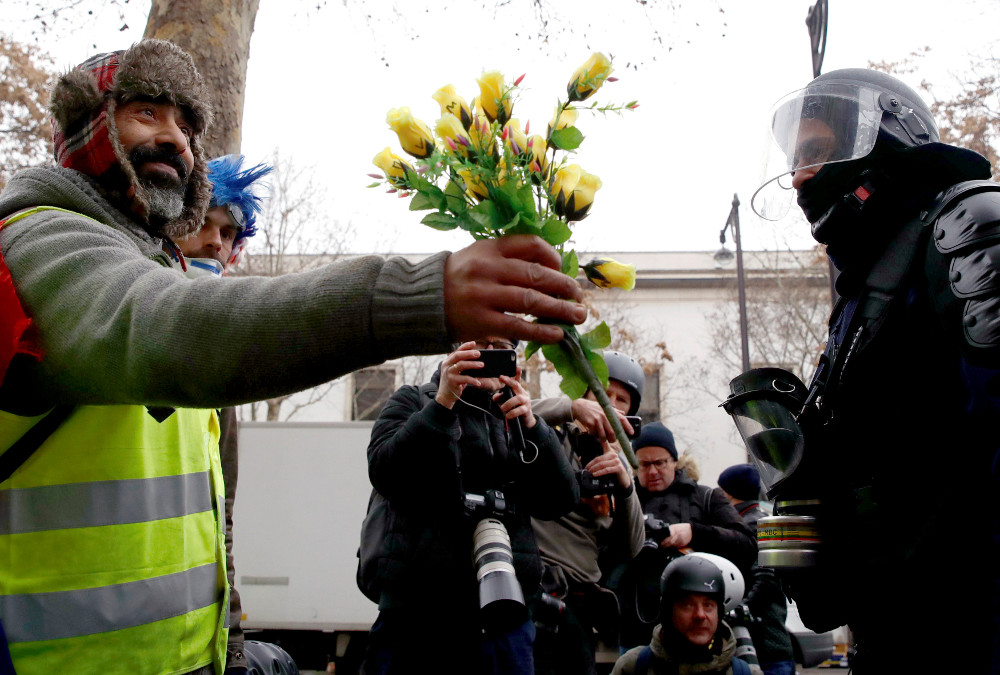 A protester offers flowers to French riot police during a demonstration by the "yellow vests" movement in Paris. They were protesting the French government's reform plan. (CNS/Gonzalo Fuentes, Reuters)

The pope praised all those who work to protect and defend the rights and dignity of children living in areas of conflict, saying, "one out of every six children in our world is affected by the violence of war or its effects."

The mood in many countries, he said, is marked by "mistrust rooted in the fear of others or of strangers, or anxiety about one's personal security."

"Sadly," he said, "it is also seen at the political level, in attitudes of rejection or forms of nationalism that call into question the fraternity of which our globalized world has such great need."

"Today more than ever, our societies need 'artisans of peace' who can be messengers and authentic witnesses of God the father, who wills the good and the happiness of the human family."

Everyone, including young people, is called to cooperate and contribute to building a "common home" in one's own life, community, nation and world, he said.

"Authentic political life, grounded in law and in frank and fair relations between individuals, experiences renewal whenever we are convinced that every woman, man and generation brings the promise of new relational, intellectual, cultural and spiritual energies," he said.

"Every election and re-election, and every stage of public life, is an opportunity to return to the original points of reference that inspire justice and law," he said.

Good politics, he added, "respects and promotes fundamental human rights, which are at the same time mutual obligations, enabling a bond of trust and gratitude to be forged between present and future generations."