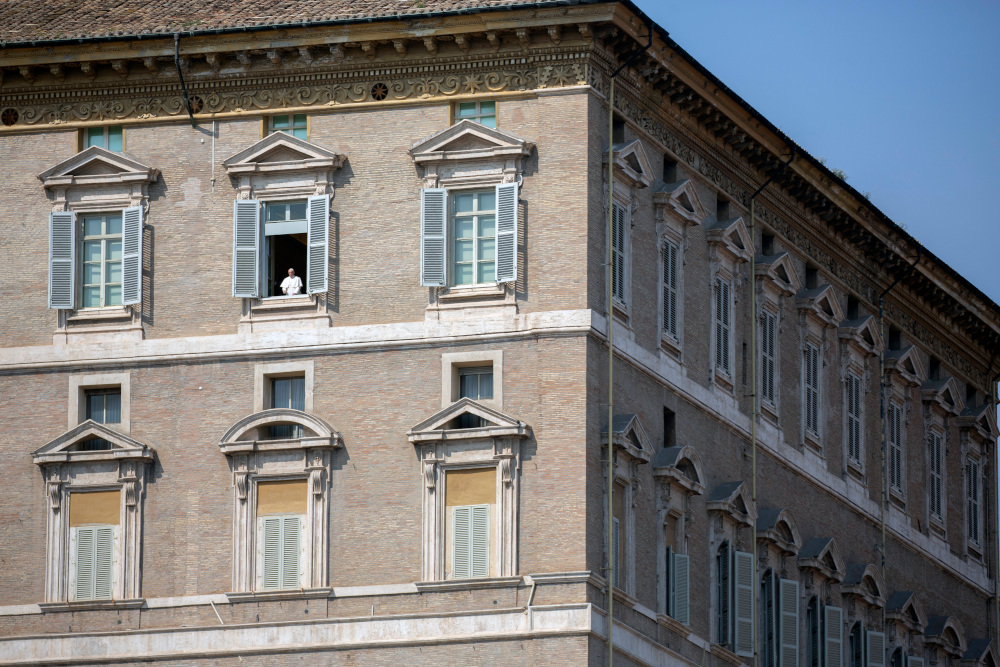 Pope Francis delivers his blessing from the window of his private library overlooking an empty St. Peter's Square, at the Vatican, Sunday, March 22, 2020. During his weekly Sunday blessing, held due to virus concerns in his private library in the Apostolic Palace, he urged all Christians to join in reciting the ''Our Father'' prayer Aug. 19 at noon. For most people, the new coronavirus causes only mild or moderate symptoms. For some it can cause more severe illness, especially in older adults and people with existing health problems. (AP/Alessandra Tarantino)

Pope Francis is at heart a pastor who likes to be with his people, but the COVID-19 pandemic has made that impossible. He cannot travel or invite crowds to St. Peter's Square. He cannot hug the sick and disabled. He cannot talk to pilgrims. He cannot even celebrate the Eucharist for crowds of people.

Francis has become a prisoner of the Vatican, the very thing he never wanted to be. What should he do with all his extra time?

Here are five ways the pope could use his time.

First, Francis should preach and write about the pandemic to Catholics and the people of the world, to give people consolation and hope. He needs to tell people and governments how to respond to COVID-19 in a way that reflects Christian love and Catholic social teaching.

Second, Francis needs to convene a virtual meeting of experts to discuss how to use the internet and social media to foster small virtual communities in the church — parish-level groups that could, for example, reflect and pray over the upcoming Sunday Scriptures before they hear from their priest on Sunday. These lay-led groups could plan educational and social projects to help the poor. There is already a lot of experimentation going on around the world, and a conference of experts and practitioners would be a great way of sharing knowledge, experience and best practices.

This should not be a meeting of bishops, who are incapable of thinking outside hierarchical structures. We have plenty of online preaching and teaching. What is needed is an openness to interactive lay participation, particularly from experts in technology and those who have already been using technology to foster community.

McCarrick, who was a cardinal archbishop, was dismissed from the priesthood for sexually abusing children and sleeping with seminarians. People still want to know why he was able to rise so high in the church. Who in the United States and in Rome knew about his transgressions and when did they know it?

A report that would answer these questions was ordered up by Francis. Where is it? My guess is that the Vatican (including, perhaps, Francis) is dragging its feet because the report will make the last two papacies, especially that of John Paul II, look bad. What did these popes know? What did the people around them know? Why did the vetting process for McCarrick's appointment to three dioceses (Metuchen, Newark and Washington), plus his promotion to cardinal, fail?

Fourth, the pope needs to deal with financial corruption in the Vatican and the church.

Pope Emeritus Benedict XVI gets credit for beginning the reform of Vatican finances during his papacy by bringing in Moneyval, an international financial agency, to deal with money laundering and the financing of terrorism. But time and again, attempts to clean up the finances met opposition and the reformers were eventually forced out.

A major success was cleaning up the Vatican bank. Outside auditors spent many billable hours examining all the accounts. New procedures were implemented, staff was retrained and better supervision was put in place.

But we still need a full explanation of why top officials at the Vatican's Financial Information Authority lost their jobs. When someone like René Bruelhart, with an impeccable international reputation, is forced to resign, something is terribly wrong.

The bank reforms are a template for how to pursue reform: Outside auditors must be brought in to review every agency. If Francis does not want to spend the money to accomplish this, major donors in the United States and Germany must volunteer to pay for it.

The audit reports must also be made public in order to begin restoring trust in the church's finances.

The Vatican must then put in place procedures to eliminate corruption and incompetence. This is not rocket science. Governments, businesses and nonprofits do this every day. New procedures were recently announced for dealing with the Vatican's vendors and contractors; that's a step in the right direction, but conflict of interest rules are needed as well, as are disclosure rules about every employee's outside income, including gifts. That should include cardinals.

Lay experts need to be more involved in Vatican finances, as staff and as members of supervisory boards. The recent appointment of six expert women to the Vatican Council for the Economy is a step forward. 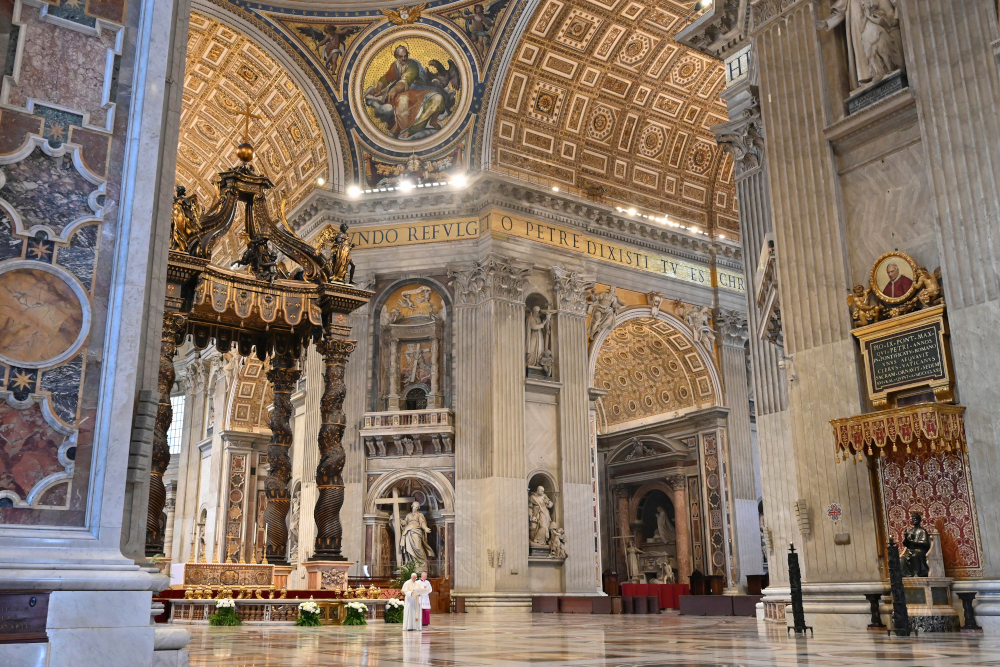 Pope Francis, small white figure at center left, delivers his blessing during Easter Sunday Mass inside an empty St. Peter's Basilica, at the Vatican, Sunday, April 12, 2020. Pope Francis and Christians around the world marked a solitary Easter Sunday, forced to celebrate the most joyful day in the liturgical calendar amid the sorrowful reminders of the devastation wrought by the coronavirus pandemic. (Pool via AP/Andreas Solaro)

The fifth project for the pope while he is stuck in Rome is reform of the Vatican Curia, the bureaucracy that helps him govern the church and the Vatican City State.

Church finances are part of that reform but not the whole story. The Vatican needs a professional human resources office to be involved in hiring, compensating, training, supervising, promoting, retiring and terminating employees. All employees should be treated fairly but also need to be doing their best to serve the pope.

Francis has been somewhat successful in changing the culture of the Vatican, according to bishops and others who have visited recently. Officials who once simply lectured visiting clergy are more willing to listen. Another positive change is the pope's consolidation of smaller offices into fewer, larger ones, so that fewer people report directly to the pope.

The consolidation also de-emphasized or effectively closed certain offices without really saying so. But it also lumped together offices with little in common. The same happens in civil governments; take a look at the major departments in the U.S. government.

It would also be good to consolidate all the prosecutorial functions in one office, like a department of justice. It makes no sense for the Congregation for the Doctrine of the Faith to deal with abusive priests, nor should bishops be investigated by the very congregations that promoted them. These congregations don't want to admit they failed in vetting the men for the episcopacy in the first place.

A department of justice could be in charge of investigating financial crimes, in the Vatican and in dioceses. It could be staffed by lay investigators with experience in law enforcement.

The Curia, meanwhile, is still run on the model of a royal court, where cardinals and bishops play the roles of princes and nobles. Francis should end this system by ending the practice of making Curia officials bishops and cardinals.

Cardinals and bishops, like princes and nobles, are hard to fire and expect an equivalent position if they are removed. (See, for instance, the consternation caused in 2017, when Cardinal Gerhard Müller did not receive a prestigious appointment after being terminated as prefect of the Congregation for the Doctrine of the Faith.) Simple priests can be simply reassigned back to their dioceses.

The Curia needs to see itself not as between the pope and the bishops, but as servants to both. This would be easier to do if they were simply priests and laypeople.

These changes would also shrink the effect of ecclesial ambition. If a curial cardinal wants to be pope, he will not focus on what is good for the church, but on advancing his chances in the next conclave. If curial officials were not cardinals, such politicking would be eliminated.

Sadly, there is a lot for Pope Francis to do while he is confined to the Vatican. Francis hates this kind of administrative work — for him, it's the ecclesial equivalent of cleaning out the basement — but it comes with the job, and unless he deals with it, it will eventually compromise his reputation. The time is now.