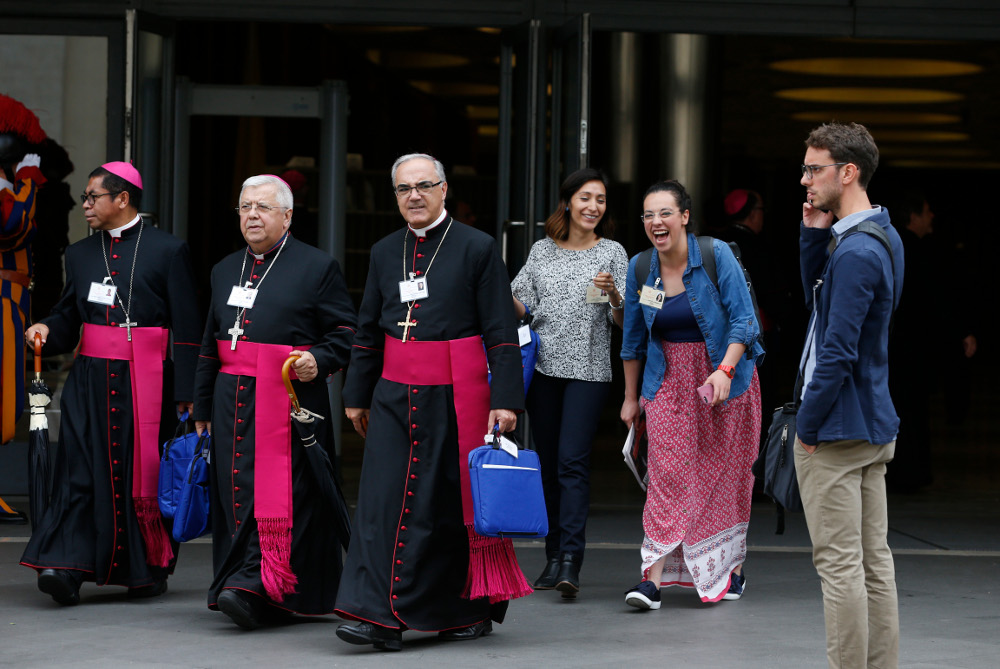 Bishops and youth delegates leave a session of the Synod of Bishops on young people, the faith and vocational discernment at the Vatican Oct 5. (CNS/Paul Haring)

One of the women religious attending the worldwide gathering of Catholic bishops told the prelates that young people today are seeking mentorship from both male and female elders.

South Korean Sr. Mina Kwon, one of the eight women religious allowed to attend the Oct. 3-28 Synod of Bishops in an advisory capacity, told the 267 prelates taking part Oct. 5 that "young people are sensitive to the issue of inequality and exclusion."

Kwon, a member of the Congregation of Sisters of St. Paul of Chartres and a trained psychologist, said that one of the reasons Catholicism spread in her country centuries ago was its focus on "equality based on the principle: 'all human beings are children of God.' "

"Catholicism brought new opportunities for women to become leaders and teachers," she told the bishops. "In other words, women were given an almost equal place in the initial stage of the Korean Church. It was a new and revolutionary thing."

"The youth needs two mentorships, male and female," Kwon concluded. "Living in a more authentic church is what young people are longing for."

Kwon is attending the synod, which is focused on young people, as one of 72 auditors. They can take part in the gathering's discussions, but not vote on its expected final document.

Another auditor who spoke Oct. 5 was St. Joseph Sr. Sally Hodgdon, an American who is vice-president of the Rome-based umbrella group of women religious, called the International Union of Superiors General.

Hodgdon told the bishops that they are being "invited to risk creating new spaces for the youth, spaces where their voices are heard and where they can freely and safely experiment in how best to express their longings."

A former assistant attorney general for the state of Connecticut, Hodgdon also referenced the continuing clergy abuse crisis, saying the church is "walking a new journey, a difficult journey, and yet, as with all crises, a journey that has new opportunities and possibilities."

At a daily press briefing to summarize the most recent remarks made by bishops at the synod, Paolo Ruffini, prefect of the Vatican's Dicastery for Communication, said there had been a wide range of topics discussed in the afternoon of Oct. 4 and the morning of Oct. 5.

Among the topics Ruffini highlighted: different cultures for young people in various countries around the world; "terrible experiences," such as violence and human trafficking, some young people have been exposed to; the desire for youth to know "the church is their home;" and a particular focus on the difficulties of young migrants.

Bishop Manuel Ochogavía Barahona of Colón-Kuna Yala, Panama, a synod member who took part in the briefing, said he thought the prelates need to "consider young people as an area where God speaks to us."

"We have to have this attitude of admiration, because we are faced with something that is sacred," said Ochogavía. "We need to identify new tools and new processes for a new dialogue." 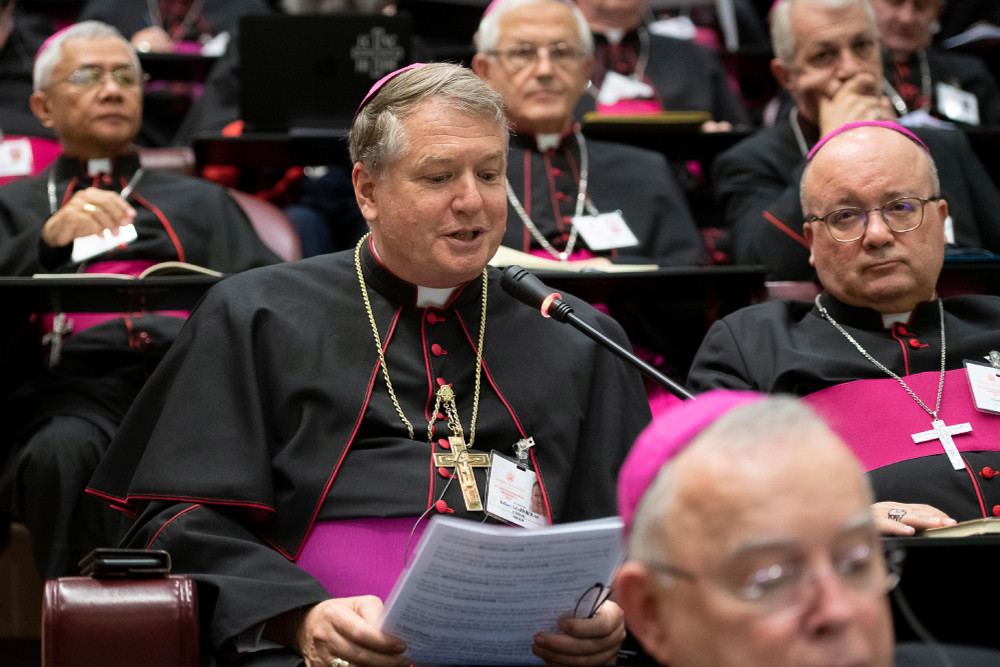 Archbishop Anthony Fisher of Sydney gives his speech at a session of the Synod of Bishops on young people, the faith and vocational discernment at the Vatican Oct. 4. (CNS/Vatican Media)

Sydney, Australia Archbishop Anthony Fisher, another synod member, explained why he had chosen to use his speech to the gathering to apologize to young people "for the shameful deeds of some priests, religious and laypeople."

"I was very aware … that there are a lot of young people hurting," said Fisher. "And I thought I, or the church, has to speak directly to them."

"Likewise, I think the laity of our church wants to hear this said by the church," said the archbishop. "We really are ashamed of what has happened and we want to make it right to the extent we can, and we're determined to do better in the future."

At the beginning of the briefing, Ruffini listed all the bishops who had spoken at the synod in the past two days, but did not detail the contents of their speeches.

Among those the Vatican prefect said had spoken during one of the gathering's times for free exchanges was Pope Francis, but, as with the other speakers, Ruffini did not say what the pontiff had chosen to speak about.