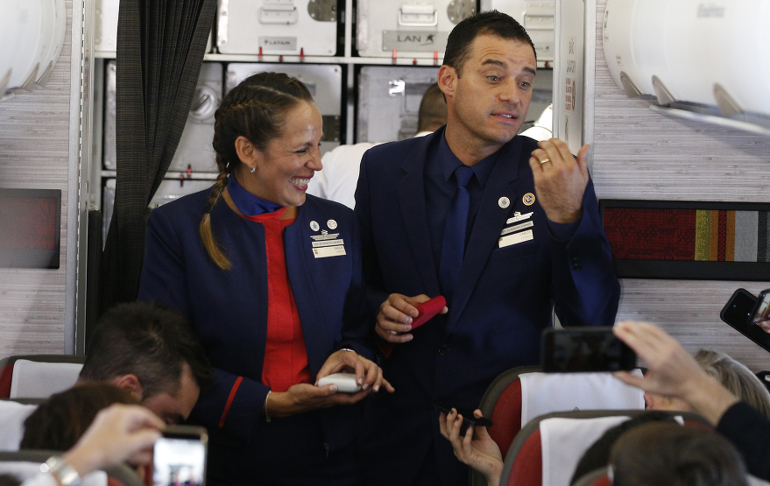 Pope Francis undertook another surprising first Jan. 18, marrying two flight attendants at 36,000 feet above Chile aboard his flight from Santiago to Iquique during his three-day visit to the country.

Paula Podest Ruiz, 39, and Carlos Ciuffardi Elorriaga, 41, were part of a group of staff that greeted the pontiff during the two-hour LATAM airlines flight. When they asked Francis to bless their relationship, the pope asked if they were married.

Podest and Ciuffardi explained they had been married civilly for eight years, but had yet to have a religious ceremony. The pope suggested they do the ceremony right then and there.

"It was a great surprise and great joy," Vatican spokesman Greg Burke explained aboard the flight afterwards. He then reassured: "Everything's valid, everything's official. There were witnesses, there is a document." 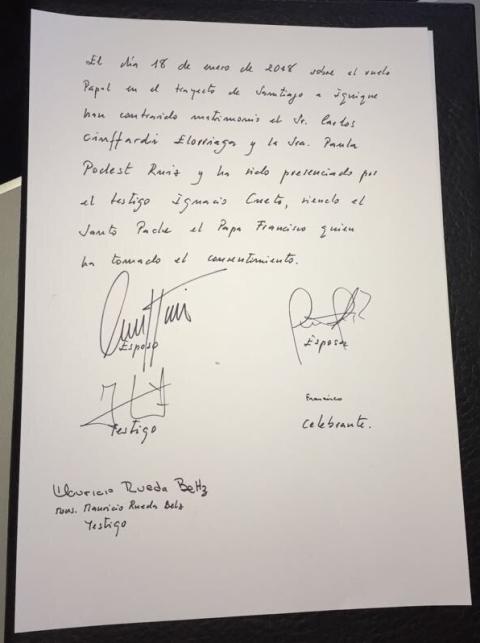 The hand-written document, signed by Pope Francis, attesting to Podest and Ciuffardi's wedding aboard the papal plane (Vatican photo)

In brief comments to reporters as the flight was landing, Ciuffardi said the pope asked he and Podest: "Are you married?" When they explained they were married civilly but not religiously, the pontiff asked: "Well, do you want to get married?"

The couple responded: "Well, yes, but are you sure?" To which Francis asked: "Are you sure?"

Podest told journalists she and Ciuffardi had planned to be married in a religious ceremony at their parish in 2010, but that the building had been damaged by an earthquake and they just had not scheduled another ceremony.

The couple said they have two children: Rafaella, 6, and Isabella, 3.

While the pope normally flies Alitalia on the first leg of his foreign trips, he usually flies one of the carriers of the nation he is visiting for flights inside the country. 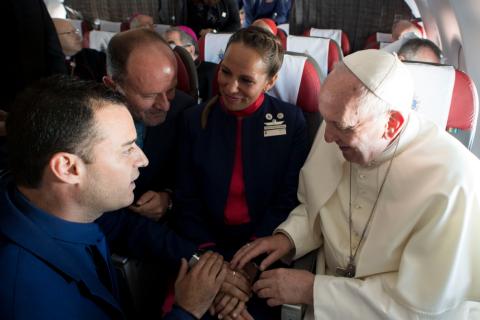 The Vatican provided a photo of the handwritten document that attests to the Jan. 18 marriage. It says Ignacio Cueto, the president of LATAM airlines, acted as witness. Above the word "celebrant" is signed in small font "Francisco."