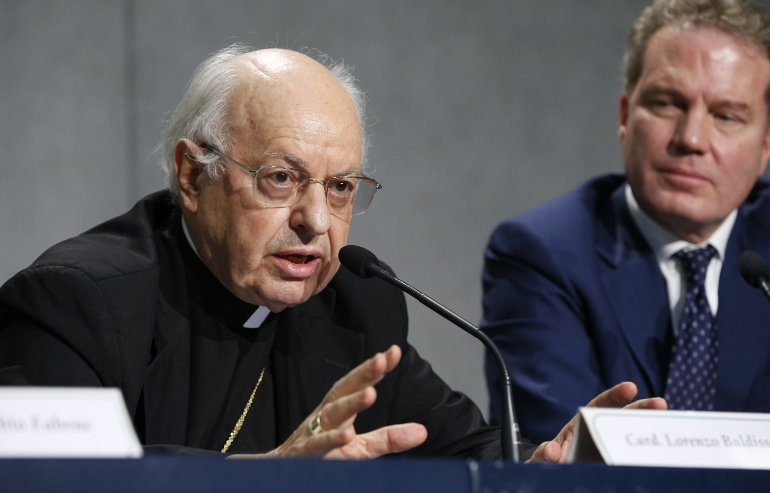 The cardinal organizing October's global meeting of Catholic bishops has criticized Philadelphia Archbishop Charles Chaput, in an unusual public rebuke of a local prelate by a Vatican official.

During an Oct. 1 press conference on the upcoming meeting, known as a Synod, Cardinal Lorenzo Baldisseri said he did not understand why one bishop had decided to publish a critique of the gathering's working document.

Without referring to Chaput by name, the cardinal noted that one member of the upcoming gathering's planning council had circulated a theologian's concerns about the document.

"The person in question is a member of the council," said Baldisseri, the head of the Vatican's synod office.

"He was present at the moment this text was presented," the cardinal continued. "If he had some objections, he could have demonstrated them; we would have inserted them, calmly."

"I do not understand because then, afterwards, he makes a declaration," said Baldisseri, adding that he was giving his comments "for honesty."

The cardinal was speaking in response to a question at a briefing to detail the agenda of the Oct. 3-28 Synod of Bishops, which has called hundreds of Catholic prelates to Rome to consider issues facing young people today.

Baldisseri was referencing Chaput's decision to publish a theologian's anonymous critique of the gathering's Instrumentum Laboris. The critique, published under Chaput's by-line at First Things, said there were "serious theological concerns" with the working document.

Chaput served as one of 15 members of the Synod's ordinary council, which was responsible for creating the document, and is due to take part in the gathering as an ex officio member because of that role.

Baldisseri was also asked in the press conference if he thought recent reports on Catholic clergy sexual abuse might serve as an impediment to the Synod's desire to speak to young people today. He said that it might instead be a "providential opportunity … to show to young people and everyone else what the church is."

The 2018 Synod, which is taking the formal theme "Young People, the Faith and Vocational Discernment," will be the third since Pope Francis' election in 2013. The pontiff will open the gathering with a Mass in St. Peter's Square in the morning of Oct. 3, before its sessions get underway that afternoon.

The general sessions of the gathering are expected to continue for about two weeks, after which time the members are expected meet in small groups divided by working language.

Baldisseri confirmed earlier reports that two bishops from mainland China will be taking part in the Synod for the first time, thanks to the recent "provisional agreement" between the Vatican and Beijing that ended a decades-long dispute over appointment of Catholic bishops in the Communist country.

Others taking part in the gathering include 50 cardinals, 145 bishops and archbishops, 37 auxiliary bishops, and ten priests and brothers from religious orders. Thirty-four young people will be present as auditors, able to take part in all the discussions but unable to vote on the meeting's expected final document.

As the press conference got underway Oct. 1, the Vatican released a new set of by-laws for the Synod's operation, known as the "Instruction on the celebration of Synodal assemblies and on the activity of the General Secretary of the Synod of Bishops."

The instruction codifies some of the changes made to the Synod's process by the apostolic constitution Episcopalis Communio, which was released Sept. 18.

The document contains several modernizations throughout its 36 articles. It does not set Italian as the automatic working language of a Synod gathering, for example, stating rather that the language of an upcoming meeting "be made known with appropriate anticipation" to its members.

The instruction also clarifies that a Synod gathering's final document must be approved by two-thirds of the members taking part in voting on the day it is presented.

The document makes clear that the Synod of Bishops remains primarily a body for bishops, or, at the least, ordained men. Although the instruction prescribes a role for ten members of religious institutes, it specifies that those members must be "clerics," meaning it does not mandate there be the presence of women religious at Synod gatherings.

Three women religious will be taking part in the 2018 gathering as auditors.

Asked about whether there could be a future for inclusion of more women in future gatherings, Baldisseri said the synod remains "doctrinally" a "Synod of bishops."

"That is why we have continued to have this structure," the cardinal explained. "We are at this point; the future we put in the hands of God."