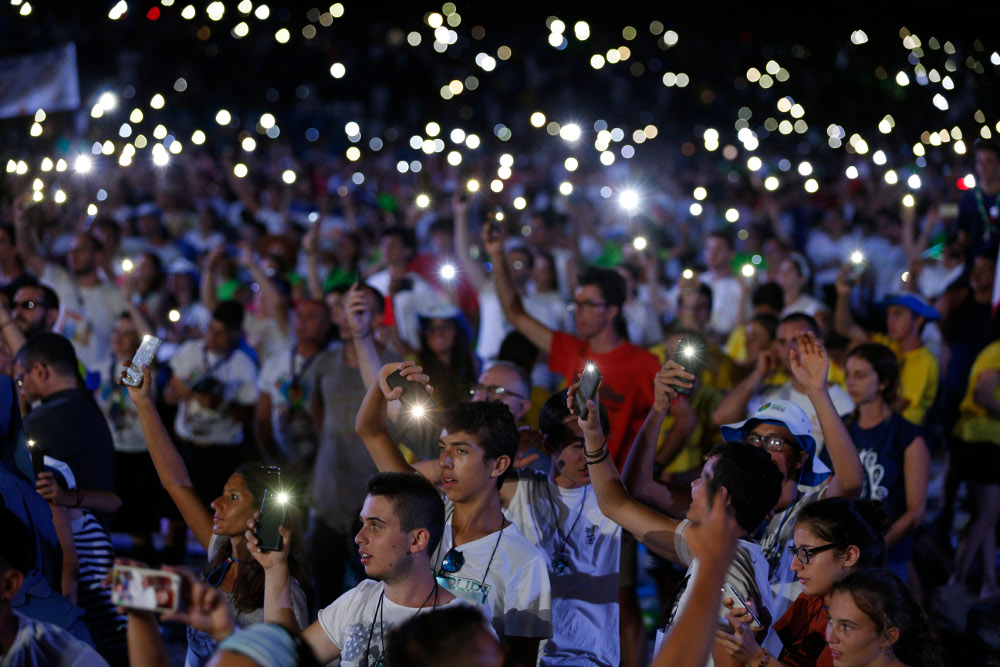 Italian young adults light up the night with their phones during an evening meeting with Pope Francis at the Circus Maximus in Rome Aug. 11. (CNS/Paul Haring)

The Synod of Bishops will meet in October to discuss teenagers and young adults in the Catholic Church and find ways to encourage their enthusiasm and dreams, help them sift through the possibilities to serve others and resist temptations.

Pope Francis will preside over the synod, which is scheduled for Oct. 3-28, and will bring together more than 300 cardinals, bishops, priests, religious and lay experts, including young people.

In addition to their personal experience, synod participants will have at their disposal a working document that was based on input from bishops' conferences, religious orders, offices of the Roman Curia and Catholic organizations; an online survey open to anyone 16-29 years old; and a document prepared by more than 300 young people who met in Rome in March at the invitation of the pope.

Francis has invited hundreds of young people to join synod participants Oct. 6 in the Vatican audience hall for an evening of music and talks by young people about the search for their identity, hopes for their relationships and ideas for living a life of service and self-giving.

Francis also named dozens of "collaborators" and "observers" to the synod, including 30 women and several young adults. They participate in the synod discussions, but do not have a vote on the final proposals given to the pope.

The U.S. participants include: Jonathan Lewis, assistant secretary for pastoral ministry and social concerns in the Washington Archdiocese; Fr. Robert Panke, rector of St. John Paul II Seminary in Washington; Sr. Briana Santiago, a member of the Apostles of the Interior Life; Yadira Vieyra, a researcher and immigration assistant in Chicago; and Sr. Sally Hodgdon, superior general of the Sisters of St. Joseph of Chambery.

On Sept. 15, Francis appointed U.S. Cardinals Joseph Tobin of Newark, New Jersey, and Blase Cupich of Chicago as full members of the synod. Tobin later decided not to attend the synod, telling the people of his archdiocese Sept. 21 that Francis granted his request to stay at home during this "time of crisis" in the U.S. church.

They also elected Archbishop Charles Chaput of Philadelphia, but he is listed by the Vatican as an automatic member since he is part of the synod's permanent council.

The theme for the synod is: "Young people, the faith and vocational discernment."

The synod is not focused on increasing vocations to the priesthood and religious life, although that obviously is one of the concerns the pope and participants will discuss.

The real topic is, in essence, the church, its present and its future.

Young people pray during Mass in 2015 at St. Joseph the Worker Catholic Church in Nairobi, Kenya. Bishops from East Africa said they will prioritize fundamentalism at the Synod of Bishops, because of its impact on young Catholics. (CNS/EPA/Dai Kurokawa)

Addressing the pre-synod gathering in March, Francis said the church and its members must reach out, ask what God wants of them and continually find new ways to respond to the hopes and needs of the world's people.

Of course, he said, everyone must "keep an eye on the roots" of the church and preserve its essential teachings, but they also must find creative ways to share those teachings and reflect on how the Gospel responds to people's questions today.

Young people, he said, are the ones who can help the church fight "the logic of 'it's always been done this way,' " which he described as "a poison, a sweet poison that tranquilizes the heart and leaves you anesthetized so you can't walk."

But to equip young people to take their rightful place in the church, church leaders must listen to them, be as honest as possible in responding to their questions and pass on to them the art of discernment.

Discernment, according to the synod working document, is a prayerful process that "leads us to recognize — and become attuned with — the action of the Spirit in true spiritual obedience. In this way, it becomes openness to new things, courage to move outward and resistance to the temptation of reducing what is new to what we already know."

"Discernment is listening, first and foremost, that can also become a driver for our actions, the ability to be creatively faithful to the one single mission the church has always been entrusted with," the document said.

But reaching young people, educating them in the faith, preparing them for discernment and helping them live as Christians in the world involve addressing myriad issues, so the synod is expected to be broad.

For example, in mid-September the bishops' conferences of East Africa published a list of the priorities their delegates will address at the synod: "Catechesis to counter the impact of religious fundamentalism and Pentecostalism; [the] institutional vocational status of single persons with no particular consecration; training of spiritual directors; as well as formation for active citizenry in politics; dignity of women; and civil, social and political engagement."

The East African bishops also have members who will address the synod on: Catholic education; digital technology; unemployment; the liturgy; "situations of war, violence and young migrants; the role of families and life choices; and formative and social accompaniment."

The 300 young adults who met in Rome in March mentioned those issues, as well as others. But underlying all their concerns was a request that church leaders recognize them as full members of the Catholic community, take their concerns and questions seriously and make a commitment to being real role models and mentors.

The young adults, most of whom work for the church or are very active in their parishes or Catholic movements, said young Catholics need better education in what the church teaches. But they also need patient answers when they have questions about church teaching that do not seem to coincide with the values and practices they absorb from their cultures.

At the same time, speaking for themselves and their peers, the young adults did not just stretch out their hands asking for help. They also offered it, if church leaders were willing to open space for them.

"The church must involve young people in its decision-making processes and offer them more leadership roles" on a parish, diocesan, national and international level, they said.

"The young church also looks outward," their statement said. "Young people have a passion for political, civil and humanitarian activities. They want to act as Catholics in the public sphere for the betterment of society as a whole. In all these aspects of church life, young people wish to be accompanied and to be taken seriously as fully responsible members of the church."

Francis has said that the Synod of Bishops increasingly should be a structure for listening to the Catholic faithful, demonstrating a local bishop's concern for the entire church and a means of expressing all the bishops' unity with the pope. 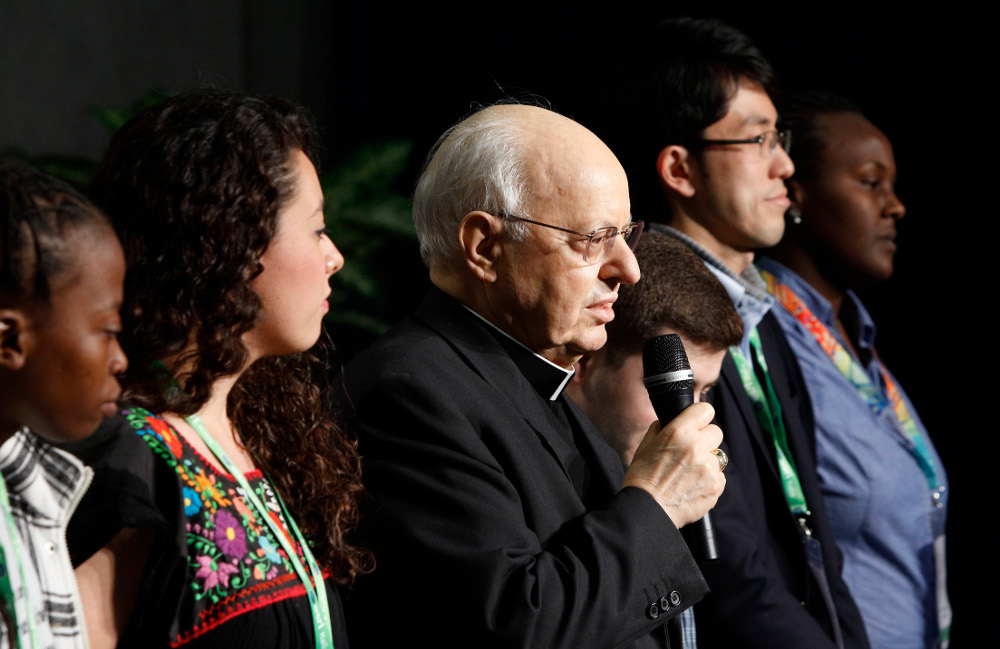 Cardinal Lorenzo Baldisseri, secretary-general of the Synod of Bishops, and youth delegates attending pre-synod meetings are pictured during a press opportunity at the Vatican March 20. (CNS/Robert Duncan)

Replacing Blessed Paul VI's 1965 document that established the Synod of Bishops and building on changes made to the synods over the past five decades, Francis issued an apostolic constitution Sept. 18, providing a theological explanation of the synod's role in the church and updating rules for how a synod is prepared for, conducted and implemented.

The constitution, Episcopalis Communio ("Episcopal Communion"), also states for the first time that voting members of the synod do not necessarily have to be priests. The Union of Superiors General, the organization of leaders of men's religious orders from around the world, elected two religious brothers to be members of the synod.

Discussing the normal voting members of the synod, Francis' new rules, which were published only in Italian Sept. 18, said that "according to the theme and circumstances, others who are not honored with episcopal duties can be called to the synod assembly with a role to be determined by the Roman pontiff."

Asked if that meant that women or women religious could be full voting members of the synod, Bishop Fabio Fabene, undersecretary of the Synod of Bishops, said that according to the new rules, the men's Union of Superiors General "can elect any male religious, even nonpriests, as the pope had permitted by exemption in the last two synodal assemblies. As for women, they are already present as observers and participate in the synodal assembly and the small groups and have a right to speak."

This story appears in the Synod on the Youth 2018 feature series. View the full series.
A version of this story appeared in the Oct 5-18, 2018 print issue under the headline: Synod to prepare young Catholics for discernment, future.