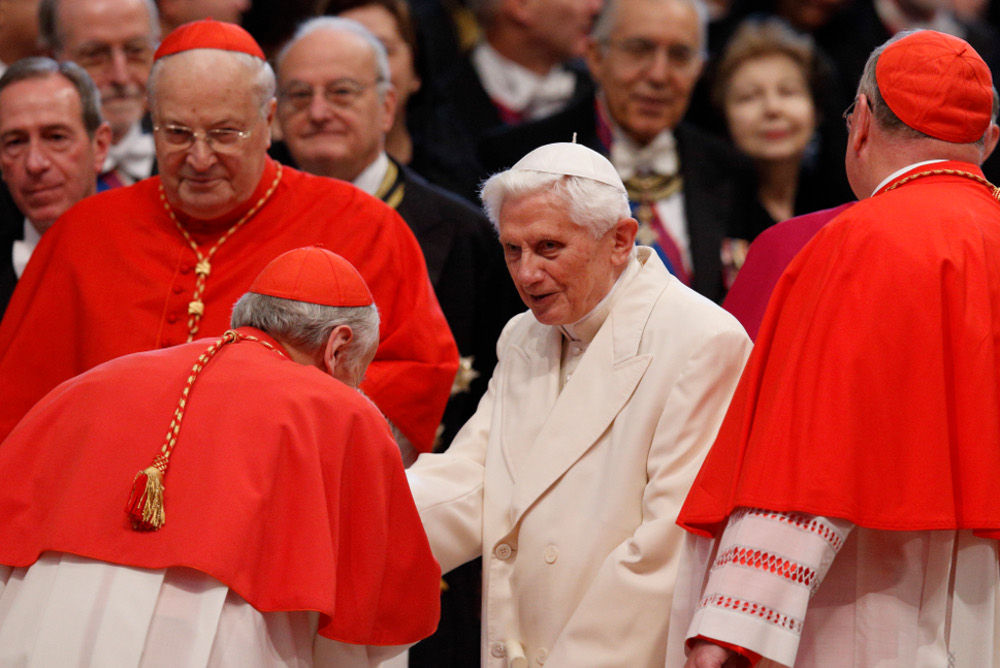 Retired Pope Benedict XVI greets cardinals before a consistory for the creation of new cardinals in St. Peter's Basilica at the Vatican in this Feb. 22, 2014, file photo. (CNS/Paul Haring)

When Pope Benedict XVI shocked a meeting of cardinals Feb. 10, 2013, with news he would be renouncing the papacy at the end of that month, he promised that as the ex-pontiff he would retreat from the public eye and serve the Catholic Church "through a life dedicated to prayer."

But by the third anniversary of his resignation, Benedict was taking on a more active role.

First came a March 2016 interview with a Belgian theologian that focused on the question of God's mercy, just as Pope Francis was in the midst of celebrating an Extraordinary Jubilee Year, also focused on mercy.

In November 2016 came a book-length interview with German journalist Peter Seewald, where Benedict defended his 2005-13 papacy against criticism. "I do not see myself as a failure," he said in the book, titled Last Testament: In His Own Words. "For eight years I carried out my work."

Now comes a letter blaming the continuing clergy abuse crisis on the sexual revolution and theological developments after the Second Vatican Council, weeks after Francis hosted a first-of-its-kind bishops' summit on abuse that focused instead on the endemic structural issues that have abetted cover-up in the church for decades.

What to make of this development of a pope emeritus who emerges from the shadows unannounced from time to time to offer his comments on current affairs, or even on issues being handled by his reigning successor?

A number of noted theologians and church historians are expressing serious concern that Benedict's choice to engage in such public action undermines Francis and plays into narratives splitting Catholics between two popes, one officially in power, and the other wielding influence as he writes from a small monastery in the Vatican Gardens.

"Benedict told us he was going to live a life of quiet contemplation," said Christopher Bellitto, a historian who has written extensively on centuries of popes. "He has not. A former pope should not be publishing or giving interviews."

Richard Gaillardetz, a theologian who focuses on the church's structures of authority, called the precedent being set by Benedict's latest letter "troubling."

The former pontiff, said the theologian, is offering "a controversial analysis of a pressing pastoral and theological crisis, and a set of concrete pastoral remedies."

"These are actions only appropriate for one who actually holds a pastoral office," said Gaillardetz, a professor at Boston College.

Even the Vatican appears to be struggling to understand what to do with a former pope who wants to engage in public debate. As Benedict's latest letter appeared on several right-wing Catholic websites overnight April 10, the Holy See Press Office seemed unprepared, unable even to respond to questions about whether the text was authentic.

In fact it was Archbishop Georg Ganswein, Benedict's personal secretary, that confirmed for many journalists that the text was indeed from the former pontiff.

"The institution of the pope emeritus in the age of mass media and of social media must be regulated carefully," said Massimo Faggioli, an Italian church historian and theologian who teaches at Villanova University.

"This is something that must be done especially about the papal entourage," he said. "The Vatican is a Renaissance court and it is difficult enough to govern one court without having to deal with a 'shadow papal court' — which is what we have today."

Gaillardetz and Bellitto, a professor of history at Kean University in New Jersey, both said Benedict's decision to continue wearing white after his resignation and to call himself the "pope emeritus," instead of some other title such as the "emeritus bishop of Rome," have not helped make clear that there is only one pope at a time.

"The Vatican is a Renaissance court and it is difficult enough to govern one court without having to deal with a 'shadow papal court' — which is what we have today."

Shortly after the release of Benedict's letter, one Italian journalist pointed to the official advice the Vatican gives to retired bishops about how to manage their relationships with their reigning diocesan prelates.

"The Bishop Emeritus will be careful not to interfere in any way, directly or indirectly, in the governance of the diocese," states Apostolorum Successores, the Congregation for Bishops latest directory for bishops, released in 2004.

"He will want to avoid every attitude and relationship that could even hint at some kind of parallel authority to that of the diocesan Bishop, with damaging consequences for the pastoral life and unity of the diocesan community," it continues.

Or, as theologian Natalia Imperatori-Lee put it about Benedict: "It is crucial that he (and, perhaps more importantly those around him) practice a ministry of silence lest it appear that he wants to undermine the current, only, Bishop of Rome, who is Francis."

"To continue to speak on matters the pope is working vigorously to correct in the global, complex reality … that is the church is to encourage dissent [and] to flirt with schism," said Imperatori-Lee, a professor at Manhattan College.

"Let the pope be the pope," she advised. "And let the pope emeritus pray for him."

A version of this story appeared in the May 3-16, 2019 print issue under the headline: Theologians concerned about newly engaged role of Benedict, pope emeritus.