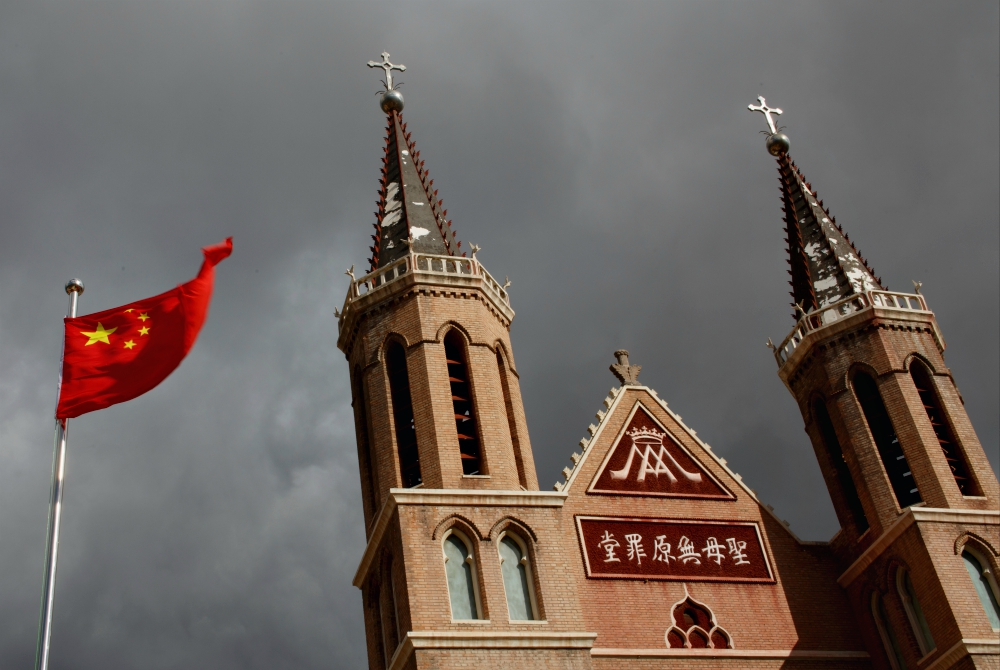 The Chinese national flag flies in front of a Catholic church in Huangtugang, China, in 2018. (CNS/Reuters/Thomas Peter)

The Vatican's controversial two-year deal with China over the appointment of Catholic bishops in the communist country appears likely to be extended past its expiration in September, say a number of experts familiar with the complicated relations between the two parties.

Although difficult issues are likely on the table during discussions — including the status of the Catholic community in Hong Kong and the Vatican's relations with Taiwan — both sides seem to want to continue the pact at least on a temporary basis, experts told NCR.

Francesco Sisci, a longtime foreign correspondent in Beijing for several of Italy's major newspapers and a recognized authority on Chinese-Vatican relations, said he had seen "a series of positive signs" that the accord was headed toward renewal.

Sisci highlighted the way both sides have tried to reconcile differences within China's Catholic community, which has been split for decades between a group that accepted the government's involvement in choosing Catholic bishops and a so-called "underground" organization that recognized only the pope's authority on that issue.

Although the details of the original agreement have not been made public, it is widely known that it involves the proposing of names for new bishops to the Vatican by the Chinese government with the help of a state-run group called the "Patriotic Catholic Association."

The pope then makes the final decision on whom to appoint as bishop, effectively giving him veto power on the matter.

Pointing to China's granting of official recognition to three former "underground" bishops this summer, Sisci said the Vatican and Beijing "are beginning to choose new bishops together, are beginning to fill in the cracks of the Chinese church."

Francis had previously readmitted to "full ecclesial communion" seven living Chinese bishops who were ordained before the deal without Vatican approval, and had thus incurred automatic, or latae sententiae, excommunications.

Lawrence Reardon, a professor of political science at the University of New Hampshire who has written a number of books exploring the Chinese Communist Party's maneuverings, also pointed to the efforts by Beijing and the Vatican to facilitate reconciliation between China's two Catholic communities.

Both sides, said Reardon, "are trying to find a way in which they can make this bridge between the official and the unofficial Catholic Churches in China."

The Vatican-China deal has been the subject of fierce criticism by some Catholics, who say Francis should not have acquiesced to the government's demand to be involved in bishop appointments, and who also criticize China's human rights record.

Retired Hong Kong Cardinal Joseph Zen has been the most prominent critic, openly accusing Francis in 2018 of "putting wolves before your flock." This March, Zen accused Vatican Secretary of State Cardinal Pietro Parolin of "manipulating" the pope into accepting the deal.

Myanmar Cardinal Charles Bo, who has led the church in Yangon since 2003 but was only made a cardinal by Francis in 2015, has also recently emerged as a trenchant critic of the Chinese government.

In April, Bo wrote a column for the Union of Catholic Asian News blaming Chinese authorities for "inhumane and irresponsible" handling of the original coronavirus outbreak in Wuhan. Bo also claimed that China had acted with "criminal negligence," causing the virus to spread across the world.

China came under further criticism in late July, when U.S. data monitoring group Recorded Future alleged that a state-sponsored group hacked computers at the Vatican and in the Hong Kong Diocese in order to gain an advantage in the negotiations.

Although some observers have wondered if Zen's and Bo's remarks make it more difficult for the Vatican to renew its deal with China, Reardon suggested that Francis may benefit from them expressing their concerns.

"If the pope wanted to shut down Zen or Bo, he could just tell them," the political scientist said.

"But if the pope starts talking about this, what's going to happen to the Catholic Church in China?" Reardon asked, adding: "I think that it's very useful for the church to have people like Zen and Bo to focus on these problems."

As it does each week, the Vatican sent journalists a copy of the pope's prepared remarks a few minutes before the papal appearance. Although the prepared text had the pontiff saying he was following "not without worry" the protests in Hong Kong over Beijing's imposition of widely criticized new security laws, Francis skipped over that paragraph while speaking.

That move, to show the journalists a text and then not actually say the words, could have been Francis' strategy to tell Chinese President Xi Jinping what he was thinking without trying to unduly embarrass him, said Reardon. 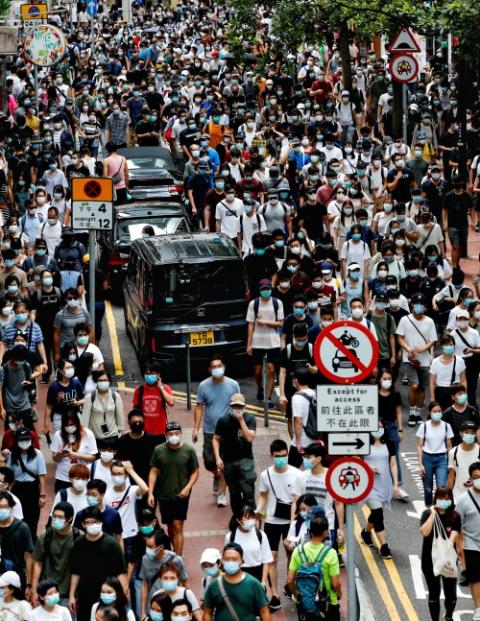 Demonstrators march during a protest against the national security law in Hong Kong July 1. (CNS/Reuters/Tyrone Siu)

"When I looked at this, I immediately said, 'He just told Xi Jinping ... and all the Catholics in Hong Kong and Taiwan what his position is on Hong Kong,'" said the academic. "But he did it, in my view, in a very Chinese way."

"I think [Francis] realized that this is a better way to convince Xi Jinping that he's willing to work with him," said Reardon. "The Catholic Church has a strong position, but he's not going to embarrass Xi Jinping, at this point."

Peter Moody, an emeritus politics professor at the University of Notre Dame who specializes in Chinese politics and has written a number of books on the country's government, saw it differently.

Moody said Francis' choice not to read the prepared passage about the situation in Hong Kong showed Beijing that the pontiff was unwilling to possibly jeopardize an extension of the two-year deal with the Vatican over what is happening in Hong Kong.

"My inclination would be that [Francis] was being pressed to make a stand, and he refused to do so, so from [Beijing's] point of view, they can get away with anything," Moody said. "He's not going to do anything to mess up the deal."

But Moody also suggested that the Chinese might be willing to make concessions during the ongoing negotiations with the Vatican, partially because the details of the original deal have never been made public.

"Since the agreement is secret, there is a certain amount of wiggle room on the Chinese side at this point," he said. "They can make concessions which aren't obvious concessions, and the current leadership of the church would not be inclined to gloat about those concessions, either."

Although Moody also warned that because of the deal's secrecy, "if it's violated, there's no way to show that it's violated."

Both Reardon and Sisci expressed doubt that China would be pushing the Vatican for any big concessions to extend the deal, such as a change to its recognition of Taiwan. The Holy See remains one of only 15 U.N. states to have formal diplomatic relations with the island, which China considers a rogue province.

"I think the question of Taiwan is not so important right now," said Sisci. "I believe that Beijing knows that in this very delicate moment, it is not opportune to try and change the situation about Taiwan."

"Taiwan is very nervous, everyone is very distressed — why touch this very difficult question now?" he asked.

Sisci also criticized Catholics outside China who have castigated the Vatican for making a deal with the communist country, saying that Francis' strategy is similar to how Pope John Paul II dealt with communist Poland.

When communist dictator Gen. Wojciech Jaruzelski took control of Poland in the 1980s, the journalist said, John Paul talked and negotiated with him.

"Some Catholics want a crusade against China," said Sisci. "These Catholics do not know the history of the church, and not even the ancient history, but recent history."

"The era of the crusades is over," he said.

A version of this story appeared in the Sept 4-17, 2020 print issue under the headline: Vatican-China accord is headed toward renewal.