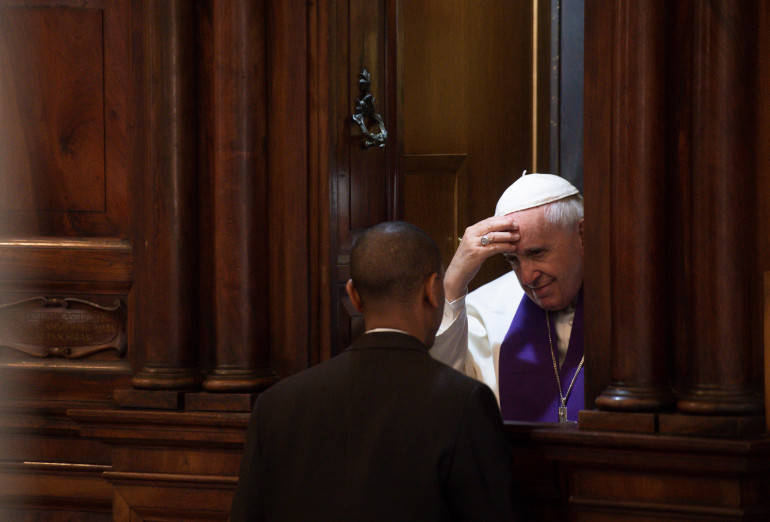 Addressing the difficulty Catholic priests globally are having in hearing confessions of individual persons affected by the highly contagious coronavirus, the Vatican made clear March 20 that it is acceptable for bishops to offer general absolution to groups of people as deemed necessary.

In an unexpected set of dual moves from the apostolic penitentiary, the Vatican also announced the offering of special plenary indulgences to any Catholic affected by the virus, to healthcare workers and their families, to those who pray for the end of the epidemic, and to those who die without being able to receive final rites.

The measures, coming in a separate decree and note from the church tribunal, are wide-ranging. They appear to reflect an extraordinary effort by the Vatican for Catholics to receive spiritual help, at a time when many around the world are unable to celebrate Mass or even go to a church for fear of risking contagion.

The note from the tribunal makes clear that while individual confession is the "ordinary way" to celebrate that sacrament, general absolution can be used when there is an "imminent danger of death, not enough time to listen to confessions of individual penitents, or a grave need."

"This Apostolic Penitentiary holds that, especially in the places most affected by the pandemic contagion and until the phenomenon ends, there are cases of grave need," says the note, highlighting the paragraph in italic font.

The tribunal indicates that it is up the individual bishops around the world to determine when to adapt the practice of individual confession to minimize risk of contagion -- suggesting use of a safe distance between confessor and penitent, and use of masks -- or to use general absolution.

Giving example of a case of grave need that would require general absolution, the note mentions the case of a bishop or priest who must remain at the entrance of a hospital and is unable to enter the facility. In such a situation, it suggests that the minister use "amplification of the voice, so that the absolution may be heard."

The apostolic penitentiary says in its decree that it is offering the new plenary indulgences because all of humanity is living in a time "marked day after day by anguished fears, new uncertainties and above all widespread physical and moral suffering."

The groups identified as being able to receive the indulgence can do so if "with a spirit distanced from every kind of sin, they unite themselves spiritually though means of communication to the celebration of the Holy Mass, to the recitation of the Holy Rosary, to the practice of the Via Crucis or to other forms of devotion, and if they recite at least the Creed, the Our Father, and a pious invocation of the Blessed Virgin Mary."

Those seeking the indulgence must, as usual, also go to confession, take part in the Mass, and pray for the intentions of Pope Francis. But in an apparent reference to the difficulty Catholics face in doing those things today, the decree says those conditions can be met "as soon as they are possible."

Addressing the situation of those who are dying from the virus in isolation, without aid of the sacraments, the decree says the church is praying for such people, and "entrusting each and every one to divine Mercy by virtue of the communion of saints, grants those faithful a Plenary Indulgence at the point of death."

This story appears in the Coronavirus feature series. View the full series.
A version of this story appeared in the April 3-16, 2020 print issue under the headline: Vatican allows general absolution during COVID-19.