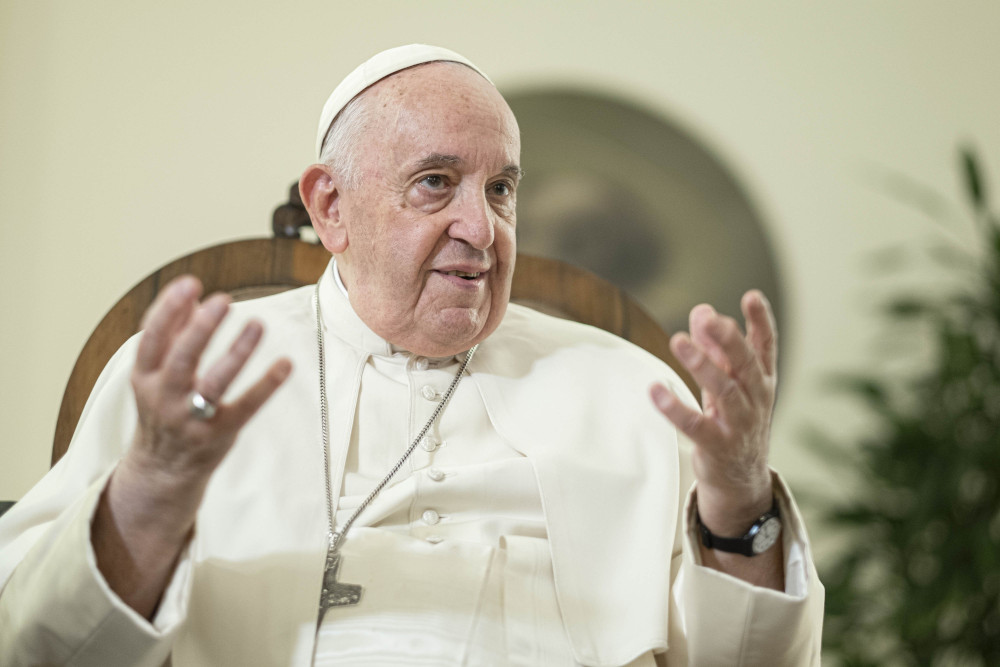 Pope Francis speaks during an interview with the top staff of America magazine at the Vatican Nov. 22, 2022. (CNS photo/Antonello Nusca, America Media)

In a wide-ranging interview with top staff of America magazine, Pope Francis decried increased polarization within the Catholic Church, affirmed the need to involve more women in church administration but ruled out women priests and emphasized the importance of the ministry of individual bishops over the role of a bishops' conference.

"The more polarization there is, the more one loses the Catholic spirit and falls into a sectarian spirit," the pope told staff from the Jesuit weekly. "What is Catholic is not either-or, but is both-and, combining differences."

Asked about abortion and the way the emphasis on church teaching against abortion seemed to be politicizing and polarizing Catholics in the United States, Francis insisted the fetus is a human being and repeated his view that abortion is killing a human being to resolve a problem.

But, he said, the problem for the church "arises when this reality of killing a human being is transformed into a political question, or when a pastor of the church uses political categories."

"When I see a problem like this one, which is a crime, become strongly, intensely political, there is a failure of pastoral care in approaching this problem," the pope said. "We cannot deal with [abortion] as if it is only a civil matter."

Francis did not explain how he thought a bishop or priest could explain church teaching in a way that was pastoral but not political and he declined to give an opinion on whether the U.S. Conference of Catholic Bishops should present the fight against abortion as its preeminent concern.

"Jesus did not create bishops' conferences," the pope said. "Jesus created bishops, and each bishop is pastor of his people."

On the question of women in the church, Francis insisted that ordained ministry is open only to men but that the church has a feminine, Marian dimension that is even more important. But, he said, administrative roles do not belong to either theological category, and the church should appoint more women to those offices.

"That the woman does not enter into the ministerial life is not a deprivation. No," the pope said. The place of women, as a "mirror" of the church as mother and spouse, "is much more important," although he admitted the Catholic Church has not done a very good job developing that aspect of theology and explaining it.

On the question of Russia's war on Ukraine and on the Vatican's relationship with China, Francis insisted that openness to dialogue is the best way forward.

While many Ukrainians and others would like the pope to condemn Russia and Russian President Vladimir Putin by name, the pope said he did not think it was necessary. "If you have a martyred people, you have someone who martyrs them."

"Why do I not name Putin? Because it is not necessary; it is already known," he said, adding that "the position of the Holy See is to seek peace and to seek an understanding. The diplomacy of the Holy See is moving in this direction and, of course, is always willing to mediate."

As for China, the interview was conducted two days before a bishop was installed as "auxiliary bishop of Jiangxi," a diocese the Vatican does not recognize and an appointment the Vatican said it did not agree to, in violation of its controversial accord with China on the appointment of bishops.

Asked about criticism that the Vatican has been silent on China's human rights violations in exchange for having input on the appointment of bishops, the pope said: "It is not a matter of speaking or silence. That is not the reality. The reality is to dialogue or not to dialogue. And one dialogues up to the point that is possible."

"With China I have opted for the way of dialogue. It is slow, it has its failures, it has its successes, but I cannot find another way," Francis said. "There are Christians there. They have to be cared for, so that they may be good Chinese and good Christians."

A version of this story appeared in the Dec 9-22, 2022 print issue under the headline: America magazine interviews pope.