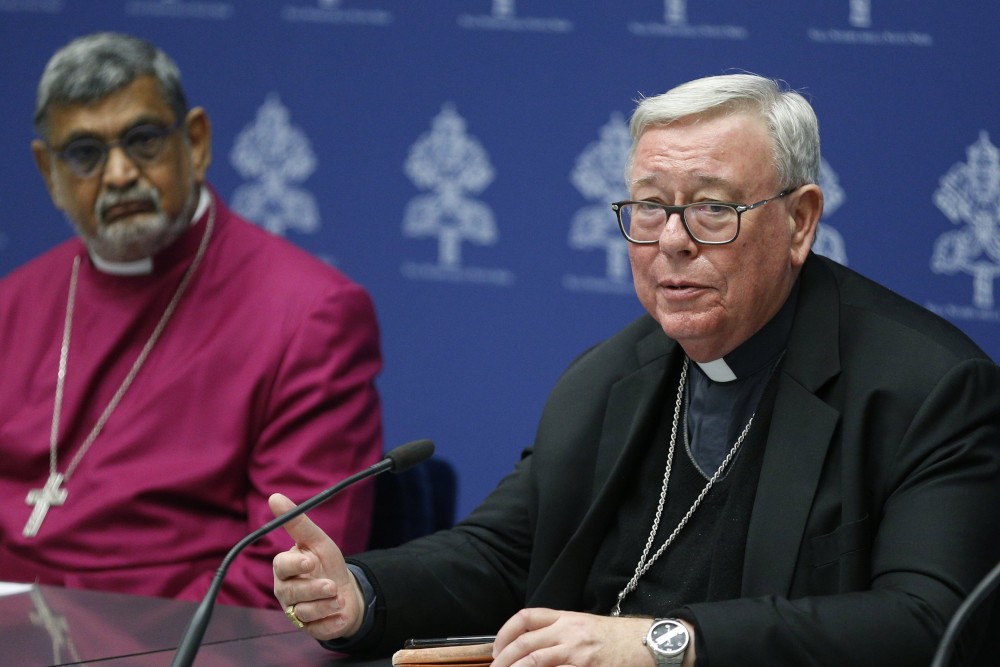 Cardinal Jean-Claude Hollerich of Luxembourg, relator general of the Synod of Bishops, speaks during a news conference at the Vatican Jan. 23, 2023. Also pictured is Anglican Archbishop Ian Ernest, the archbishop of Canterbury's representative in Rome. (CNS photo/Paul Haring)

Pope Francis did not need to launch listening sessions for the Synod of Bishops for people to discover there are tensions in the Catholic Church, said the cardinal serving as the synod's relator general.

"We do not need the synod in the Catholic Church in order to experience tensions," Cardinal Jean-Claude Hollerich of Luxembourg, relator general of the synod, told reporters at the Vatican Jan. 23. "These tensions come from the fact that each one honestly wants to see or share how we can follow Christ and proclaim Christ in the world today. That is the source of tension."

The cardinal and Brother Alois, prior of the ecumenical Taizé Community, along with representatives from other Christian churches met reporters to talk about the ecumenical prayer vigil Francis announced would precede the opening of the synod assembly and about their churches' experiences of synodality.

In another change to how the Synod of Bishops functions, Cardinal Hollerich announced, Francis has decided the assembly of bishops and other representatives will spend three days on retreat outside Rome before beginning the synod's working sessions Oct. 4.

Anglican Archbishop Ian Ernest, the archbishop of Canterbury's personal representative to the Holy See, noted the Anglican Communion's long experience with forms of synodality that include bishops, priests and laity listening to each other and to the Holy Spirit.

But asked about ongoing tensions within the Anglican Communion over issues such as the ordination of women as priests and bishops and blessings or marriages for gay couples, Ernest said, "When we talk about unity, it is not uniformity. We should give space to those who have a different opinion on certain matters; we should be able to listen to them with one's heart and engage with them to know where they are. That has been the experience of Anglican synodality."

A synodal way of proceeding, he said, helps each person clarify their hopes, dreams and convictions while also learning to listen to others, pray for them and "engage in difficult conversations, looking where the Holy Spirit is guiding us to."

Hollerich noted that the document for the current continental phase of the synod acknowledged the tensions in the Catholic Church but also insisted that, if the church is a tent, tension on the lines is needed to hold it up.

"That there are different opinions in the Catholic Church is quite normal," he said, especially at a time when the church is trying to figure out the best ways to proclaim Christ in a time of such rapid change.

Some "loud, shrill" voices have and continue to criticize the synods as organized by Francis, he said. But looking at the summaries of the listening sessions sent in by bishops' conferences around the world, "they were not so dissimilar. There was, in fact, a great unity."

Other Christians are facing similar questions about mission and ministry in the modern world, he said, and his hope is that the participation of ecumenical experts, observers and guests and the ecumenical prayer vigil Sept. 30 in St. Peter's Square "will lead to a new springtime of ecumenism."

Alois, whose Taizé Community will offer a full program for young people Sept. 30-Oct. 1 in Rome, said the ecumenical prayer and synod participation acknowledge the unity of Christians in a common baptism, a unity that must be perfected, but is still real.

The prayer vigil with Francis, he said, will "underline the importance of praying together in this time of growing polarization in our societies and in our churches."

Archbishop Khajag Barsamian, the Armenian Apostolic Church's representative to the Holy See, said a process that begins with listening to one another and praying together are key to a synod process that seeks the input of the Holy Spirit.