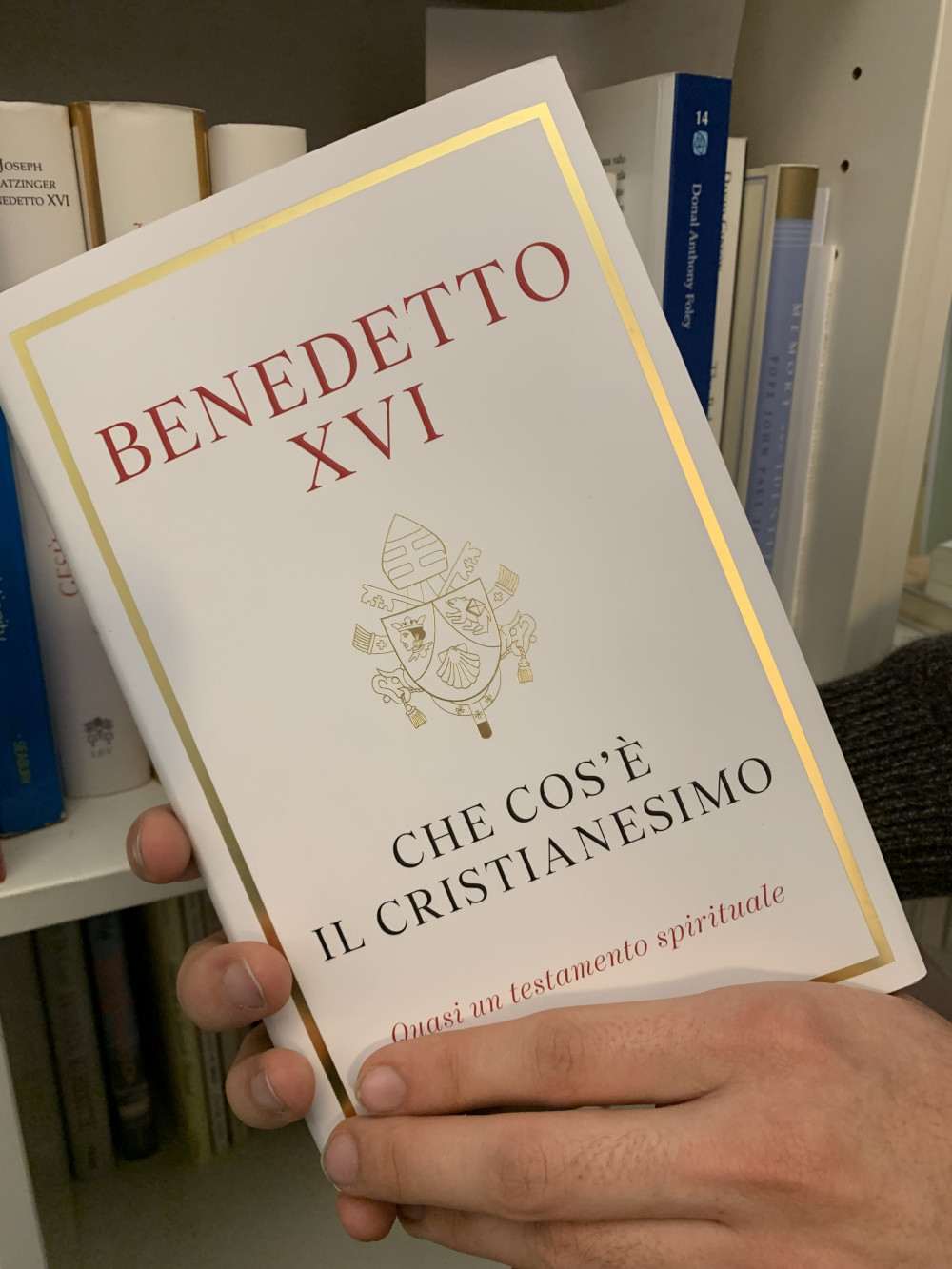 "What is Christianity?" a book of essays written by retired Pope Benedict XVI from 2014 to 2022, was released in Italian in late January. In the preface, Benedict asked that the book not be released before his death. (CNS photo/Cindy Wooden)

While the Second Vatican Council gave the Catholic Church a "beautiful" document on the priesthood, "it did not face the fundamental question" of the difference between Catholic and Protestant understandings of ordained ministry, wrote Pope Benedict XVI in an essay published after his death.

An explanation of the aspects of "sacrifice and expiation" in the celebration of the Eucharist and, therefore, in the role of the Catholic priest was the focus of two of the new essays included in "What is Christianity?" -- a book released only in Italian in late January by Mondadori.

Benedict dated the preface of the book May 1, 2022, and included an order that it not be published until after his death, which occurred Dec. 31.

Only four of the 16 essays in the book are published for the first time. All of them were written between 2014 and March 2022.

The essay on "The Catholic Priesthood" is a complete revision and expansion of a contribution retired Benedict gave to Cardinal Robert Sarah for inclusion in the book "From the Depths of Our Hearts," published in 2020. The main thrust of the book was a defense of priestly celibacy, but Benedict said Sarah had no permission to list him as co-author of the book and insisted he had contributed only extensive notes that became one chapter.

Elio Guerriero, who helped Benedict compile the essays in "What is Christianity?" said the controversy over the book with Sarah was what led enedict to insist on waiting to publish the collection of essays until after his death.

"I do not want to publish anything else in my life," Guerriero said Benedict told him. "The fury of the circles opposed to me in Germany is so strong that the appearance of any word from me immediately provokes a murderous clamor on their part. I want to spare myself and Christendom this."

The new version of the essay does defend priestly celibacy as the most appropriate expression of the total self-giving of a priest to God and as a condition for ritual purity in line with the Israelite priesthood. But the new version focuses more on the connection to ancient priesthood and the offering of a sacrifice than it does to celibacy.

Neither version of the essay mentioned the continuing practice of ordaining married men in the Eastern Catholic churches, nor the exceptions granted by St. John Paul II and Benedict himself to married former ministers of the Anglican Communion and other Christian denominations who become Catholic.

The differences, he wrote, "are not superficial and casual but indicate a fundamental difference in understanding the mandate of Christ" at the last supper when he told his disciples, "Do this in memory of me."

That difference, Benedict wrote, must be taken into account as Catholic leaders consider expanding eucharistic hospitality to Lutherans beyond the special occasions when church law permits it.