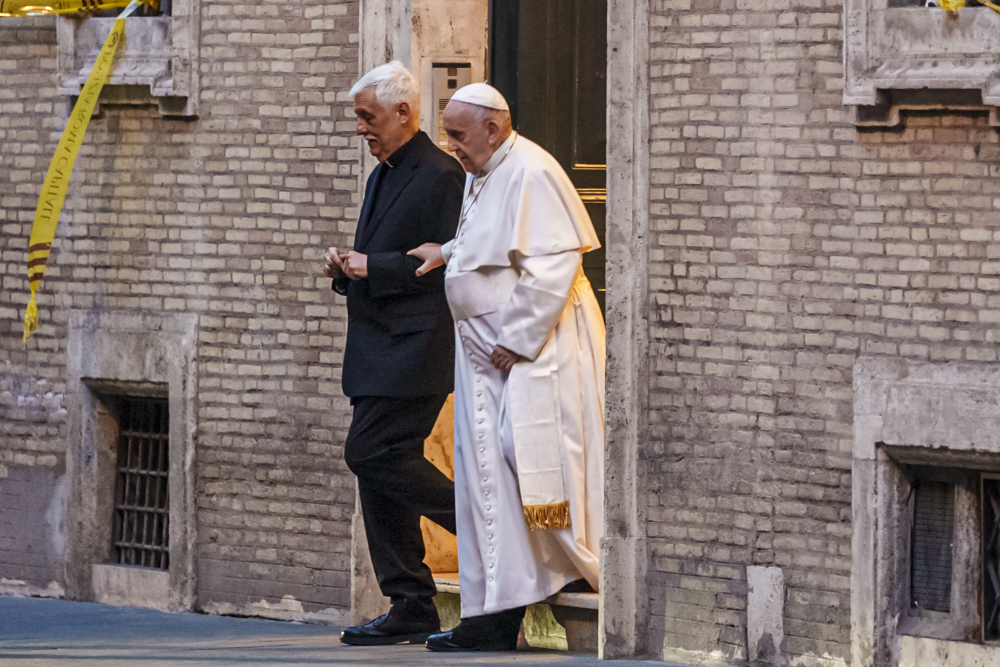 Pope Francis is flanked by the Jesuits superior general Fr. Arturo Sosa, left, as he leaves the Church of the Gesu', mother church of the Society of Jesus (Jesuits), after presiding at a mass on March 12, 2022. (AP Photo/Domenico Stinellis)

The head of Pope Francis' Jesuit religious order admitted Dec. 14 that a famous Jesuit priest had been convicted of one of the most serious crimes in the Catholic Church some two years before the Vatican decided to shelve another case against him for allegedly abusing other adult women under his spiritual care.

Fr. Arturo Sosa, the Jesuit superior general, made the admission during a briefing with journalists that was dominated by the scandal over Fr. Marko Ivan Rupnik and the reluctance of both the Vatican and the Jesuits to tell the whole story behind the unusually lenient treatment he received even after he had been excommunicated temporarily.

Rupnik is unknown to most Catholics but is a giant within the Jesuit order and the Catholic hierarchy because he is one of the church's most sought-after artists. His mosaics depicting biblical scenes decorate the basilica in Lourdes, France, the Vatican's own Redemptoris Mater chapel, the John Paul II institute in Washington and are due to grace the new basilica in Aparecida, Brazil.

The scandal involving Rupnik erupted last week when three Italian blogs — Silere non Possum, Left.it and Messa in Latino — began revealing allegations of spiritual, psychological and sexual abuse against Rupnik by women at a Jesuit community with which he was affiliated in his native Slovenia.

The Jesuits initially responded with a statement Dec. 2 that confirmed a complaint had been received in 2021 but said the Vatican's sex abuse office had determined that the allegations, dating from the 1990s in Slovenia, were too old to prosecute. The Jesuits said they decided nevertheless to keep in place "precautionary restrictions" on his ministry that prohibited him from hearing confessions, giving spiritual direction or leading spiritual exercises.

The statement posed more questions than it answered and entirely omitted the fact — first reported by Messa in Latino and later confirmed by The Associated Press — that Rupnik had been convicted and sanctioned by the Vatican after a 2019 complaint that he had absolved a woman in confession of having engaged in sexual activity with him.

The so-called absolution of an accomplice is one of the most serious crimes in the church's canon law and brings with it automatic excommunication for the priest that can only be lifted if he admits to the crime and repents — something Rupnik did, Sosa said in response to a question from the AP.

The Congregation for the Doctrine of the Faith "said it happened, there was absolution of an accomplice," Sosa said. "So he was excommunicated. How do you lift an excommunication? The person has to recognize it and has to repent, which he did."

Sosa then contradicted the Jesuits' earlier statement and said the restrictions on Rupnik's ministry actually dated from that conviction, and not the 2021 allegations that the Vatican's sex crimes office decided to shelve because they were deemed too old to prosecute.

There has been no explanation for why the office, which regularly waives statute of limitations for abuse-related crimes, decided not to waive it this time around, especially considering the previous conviction for a similarly grave offense against an adult woman.

The office, now called the Dicastery for the Doctrine of the Faith, is headed by a Jesuit, has a Jesuit sex crimes prosecutor and had as its No. 2 at the time someone who lived in Rupnik's Jesuit community in Rome.

Officials at the Dicastery either didn't respond to emails seeking comment or declined to comment, referring questions to the Vatican spokesman, who in turn referred questions to the Jesuits.

A version of this story appeared in the Jan 6-19, 2023 print issue under the headline: Jesuits admit Rupnik misused confessional, was excommunicated.