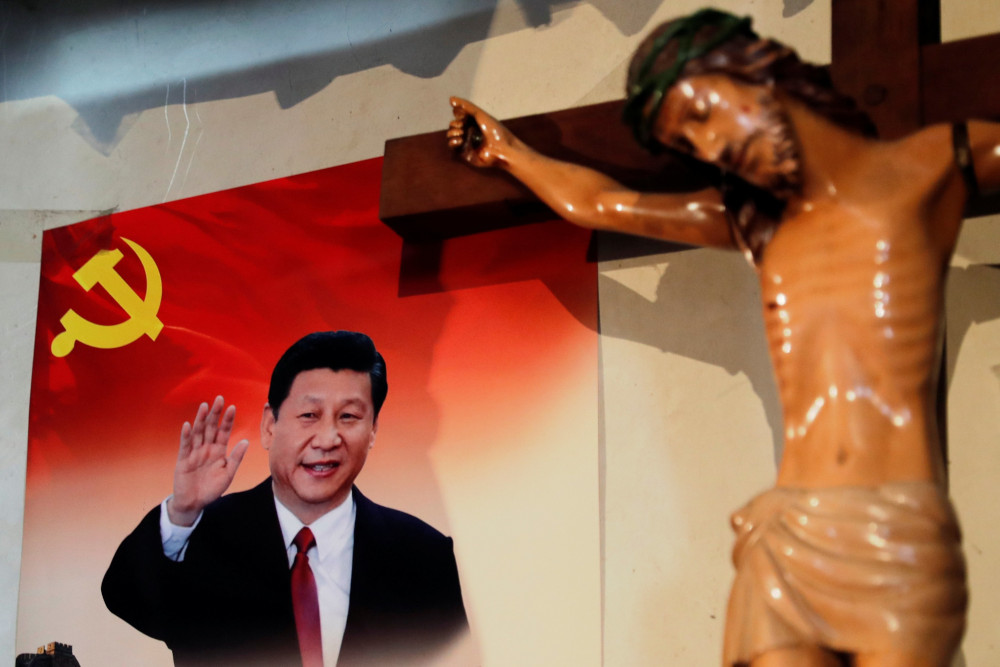 A poster of Chinese President Xi Jinping hangs next to a crucifix on the wall of the house of a Tibetan Catholic on Christmas Eve in Niuren village, in China's Yunnan province, in this Dec. 24, 2018, file photo. (CNS photo/Tyrone Siu, Reuters)

Members of the U.S. Commission on International Religious Freedom criticized a recently renewed Vatican deal with China, saying it emboldens the Chinese government to crackdown on Christian communities.

The secretive provisional agreement, originally signed in 2018 and renewed Oct. 2, allows Beijing to have a say in the appointment of bishops in the officially recognized church. Catholic officials hope the agreement will help to reconcile the government-approved church and the Catholic community, known as the underground church, which is led by priests sanctioned by the Vatican.

But last week some members of the U.S. Commission for International Religious Freedom, an independent bipartisan federal commission tasked with reporting to Congress and the administration on the state of religious freedom in the world, spoke out against the agreement, claiming it has only made the situation worse for Christians in China.

Stephen Schneck, a USCIRF commissioner who served in the Obama White House’s faith-based partnership office, says reports show that the conditions of Catholics in China have significantly worsened over the past four years since the agreement was signed. “So much worse, in fact, that we think the agreement no longer makes any sense,” he told Religion News Service.

An advocate for Catholic social justice and former dean at the Catholic University of America, Schneck said he is especially concerned about the situation of 90-year-old Cardinal Joseph Zen of Hong Kong, who was arrested along with five others by Chinese authorities in May for a bureaucratic error in a humanitarian fund viewed as a danger to China’s national security.

Zen has been an outspoken advocate for religious freedom in China and a strong critic of the Vatican agreement with Beijing. He played a crucial role in the wave of pro-democracy protests in Hong Kong in 2020 protesting the broadly written Chinese National Security Laws, which strongly limit the right to assembly. Zen’s trial resumed on Oct. 27, only days after the Vatican-China agreement was renewed.

“I don’t think that we cannot notice the timing of the restart of this trial,” Schneck said, adding that “it’s not a good sign.”

Vatican officials, including Secretary of State Cardinal Pietro Parolin, defended the deal by stating that, while not perfect, it keeps a channel open for dialogue with Beijing and has led to short-term positive results with the appointment of six bishops recognized by the pope and the Communist Party.

“Whatever communication they are having hasn’t thus far affected the release of their cardinal in Hong Kong, of folks who have been imprisoned for practicing their Catholic faith,” David Curry, another commissioner, told RNS on Friday (Oct. 28). “I personally think the Vatican is willfully overlooking the egregious use of the agreement as justification of a crackdown on the underground church.”

While Schneck praised the “long game” approach that characterizes Vatican diplomacy, he voiced skepticism that the agreement would lead to significant change.

“When it was originally signed,” Curry said, “I believe the rationale from the Vatican was to show good faith with the Chinese Communist Party with the hope that it would open up some kinds of freedoms for other Christians within the country.

“Unfortunately, that hope has not panned out,” he added.

Curry, whose organization “Open Doors USA” advocates for persecuted Christians around the world, pointed to the technological means that the Chinese government uses to monitor the religious activity of its citizens as an example of the “crackdown on religious expression” under President Xi Jinping. The members of the so-called underground church, meeting online and in people’s homes, are sometimes arrested for practicing their faith, he said.

“Things have undoubtedly gotten worse in China, no question, as it relates to religious freedom,” said Curry, adding that any religious practice in the country is allowed only under the watchful eye of the government and must obey Communist Party rules.

“In some ways,” Curry continued, the Sino-Vatican agreement “has emboldened the Communist Party because they are using the agreement to say that anyone who doesn’t practice in an officially recognized church is therefore operating illegally.”

USCIRF plans to file a report to Congress and the administration that addresses the effect that the Vatican deal with China has had on religious freedom in the country. The commission mentioned the agreement and Zen’s arrest in its 2022 report.

This isn’t the first time U.S. government officials have been at odds with the Vatican’s rekindling of relations with China. While visiting Rome and the Vatican in September of 2020, former U.S. Secretary of State Mike Pompeo suggested that the agreement compromised the Vatican’s ability to act as “a moral witness” for human rights in China.

“I think it would be very difficult for the Vatican now to be able to hold China accountable later for whatever is occurring under this agreement,” Schneck said.

Schneck, who described himself as a loyal Catholic and “a strong supporter of Pope Francis,” lamented the fact that the Sino-Vatican agreement has become a battleground for conservative and liberal factions in the church. Catholics who have been critical of Pope Francis more broadly tend to criticize the deal, while defenders of the agreement praise it as a symbol of the pope’s efforts to build bridges and promote dialogue with Beijing.

“It’s too bad that it’s become a political football between left and right within the church,” Schneck said. “This is something that needs to be looked at with much more objectivity and separate from the polarization and squabbles on one side and the other.”