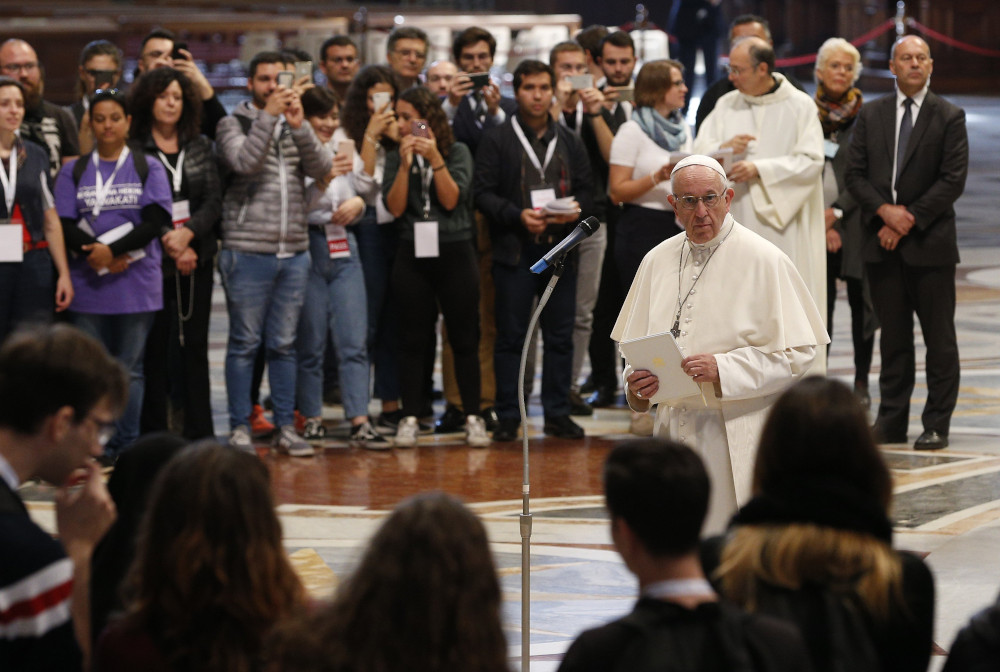 Pope Francis prepares to address young people who participated in a pilgrimage hike from the Monte Mario nature reserve in Rome to St. Peter's Basilica at the Vatican Oct. 25, 2018, during the Synod of Bishops on young people, the faith and vocational discernment. (CNS photo/Paul Haring)

A newly released Vatican document for the next phase of Pope Francis' ongoing consultation process for the world's Catholics reckons with a number of topics once considered taboo in the Catholic Church, including women's ordination, LGBTQ relationships, children of priests, sexism and clergy sexual abuse.

The 45-page document, released on Oct. 27, distills a number of the major themes from listening sessions held with millions of Catholics across the globe over the last year. While the document is careful to note that it is not magisterial church teaching, it is arguably the most comprehensive and candid expression of the Catholic Church's relationship with the modern world yet released by a Vatican office.

The document will serve as the framework for the continental phase of the church's ongoing synod process, which will involve ecclessial gatherings on every continent over the next six months, ahead of two assemblies that will be held in Rome in Oct. 2023 and Oct. 2024.

"What emerges is a profound re-appropriation of the common dignity of all the baptized," the document states in describing its efforts to listen to the voices of all Catholics. "This starts from a desire for radical inclusion — no one is excluded."

The document, titled "Enlarge the space of your tent" after the passage in Isaiah, was produced by a team of 30 advisors who gathered in Frascati, Italy for two weeks in late-September and early October, the majority of whom were lay Catholics.

112 out of 114 episcopal conferences from around the world had submitted synthesis reports, along with all the Eastern Catholic Churches and Vatican departments, religious and lay Catholic associations and online "Digital Synod" consultations.

Listening to the margins

While stating in the document's introduction that the text is neither official church teaching nor fully conclusive, the writers note that it is theological "in the sense that it is loaded with the exquisitely theological treasure contained in the experience of listening to the voice of the Spirit enacted by the People of God, allowing its sensus fidei to emerge."

Notably, the document includes many voices, experiences and testimonials from those calling for change to a number of church teachings and practices.

While many of the topics raised in the document once led to formal investigations or censures from the Vatican's doctrinal office under Popes John Paul II and Benedict XVI, under Francis' synodal process, they are now openly discussed in a document published by one of the Vatican's major departments.

"Among those who ask for a more meaningful dialogue and a more welcoming space we also find those who, for various reasons, feel a tension between belonging to the Church and their own loving relationships, such as: remarried divorcees, single parents, people living in a polygamous marriage, LGBTQ people, etc.," the document states.

The document goes on to quote from the report from the United States, noting that "people ask that the Church be a refuge for the wounded and broken, not an institution for the perfect. They want the Church to meet people wherever they are, to walk with them rather than judge them, and to build real relationships through caring and authenticity, not a purpose of superiority."

Also highlighted is the need for the church to reach out to excluded or neglected communities, among them: the poor, the elderly, Indigenous peoples, migrants, street children, those suffering from addiction, victims of human trafficking, prisoners, victims of racial or gender violence and individuals who have left ordained ministry.

The document also notes that for the church to fully achieve its goal of synodality, which the Vatican describes as "walking together," there must be greater attention to the church's ecumenical engagement with other Christian communities.

In particular, the document highlights that in responding to social and environmental challenges, the alliances forged with other Christian confessions, religions and people of goodwill have fueled the desire for deeper collaboration, both theologically and practically.

Other pastoral matters include the desire for greater access to the Eucharist and concern about it becoming a source "for confrontation, ideology, rift or division," the need for better homilies from priests, the persecution of Christians and the global shortage of priests.

At an Oct. 27 Vatican press conference following the document's release, Luxembourg Cardinal Jean-Claude Hollerich was asked about its theme of enlarging the tent of the church, especially for those that the document lists as marginalized and whose life circumstances may have put them at odds with church teaching.

The tent, he said, is open to "all the people created and loved by God."

"Let us just look to each person as a person loved by God, called into being by God. Christ died for this person on the cross, so if I am not capable of giving a space to this person in the tent, I have a problem with God," said Hollerich, who is the relator, or moderator, of the synod.

The report dedicates significant attention to the role of women in church life, noting that it was a concern mentioned by every continent that submitted synod reports.

"Women remain the majority of those who attend liturgy and participate in activities, men a minority; yet most decision-making and governance roles are held by men," it states. "It is clear that the Church must find ways to attract men to a more active membership in the Church and to enable women to participate more fully at all levels of Church life."

The document goes on to quote New Zealand's episcopal conference report, which states that the "lack of equality for women within the Church is seen as a stumbling block for the Church in the modern world."

The text also quotes from a report by the two umbrella groups who represent the members of the world's Catholic religious orders, who said that "sexism in decision-making and Church language is prevalent in the Church."

"As a result, women are excluded from meaningful roles in the life of the Church, discriminated against by not receiving a fair wage for their ministries and services," they said. "Women religious are often regarded as cheap labor."

Among areas for consideration, the document includes the question of the role of women in the church's governance structures, the possibility of women preaching, the female diaconate and women's ordination to the priesthood.

On the question of ordination, the text states: "Much greater diversity of opinion was expressed on the subject of priestly ordination for women, which some reports call for, while others consider a closed issue."

The issue of the female diaconate is one that has loomed large ever since Francis launched a commission in 2016 to study the historical questions surrounding women deacons, which the pope said did not reach a consensus on the early status of deacons. Francis then formed a second commission, which is ongoing, following the 2019 Synod of Bishops from the nine-nation Amazon region, where the topic had been a dominant theme.

The inclusion of the topic in the working document for the continental phase of the synod process indicates that the question is likely to once again be considered during the Rome gatherings in 2023 and 2024.

When asked about the question of women deacons during the press conference, both Grech and Rowlands told journalists that the issue was included in the document because it was mentioned by a vast number of reports submitted from around the world.

"It is there simply as a matter of fact," said Rowlands, adding that "it would have been dishonest had we not put that into the report."

While the document offers a litany of issues for consideration, it also stresses that synodality is more than about raising particular concerns, but rather about a new process or new way of "being Church," in order to foster greater inclusion of its members.

For this to succeed, the document states, it will require changes in the structures of the Vatican's central bureaucracy (known as the Roman Curia), the Code of Canon Law, the church's liturgy and the formation process for priests and religious.

Similarly, the document also acknowledges that the entire process of synodality has its skeptics and that some of the church's members are fearful the process could change church teaching or reduce the church to a democratic style of governance.

For this reason, the document states, "the path to greater inclusion — the enlarged tent — is a gradual one."

As the synod process moves to the continental stage, the document asks that participants consider three questions:

In terms of the next steps in the process, a final report from each continent must be submitted to the Vatican by the end of March, which will form the basis for the synod's working document, known as the Instrumentum Laboris, which will guide the next stage in Rome, and will be completed in June 2023.

While Pope Paul VI established the Synod of Bishops at the end of the Second Vatican Council in 1965, "synodality" has emerged as a key theme in Francis' pontificate.

The Vatican first announced plans for a synod on synodality in March 2020, and then in May 2021, said it was considerably widening the process to include a phased two-year listening process with consultation stages at both the diocesan and continental levels ahead of a Oct. 2023 Rome assembly of bishops from around the world.

On Oct. 16, Francis announced that he is significantly expanding that timeframe to add an additional Rome meeting in Oct. 2024, indicating that the pope wants the process — and the discussions on a number of sensitive topics, as outlined in the newly released document —  to continue on much longer than formerly planned.

"Unless we become a synodal church," said Grech at the Oct. 27 press conference, "we will fail to proclaim the joy of the Gospel today."