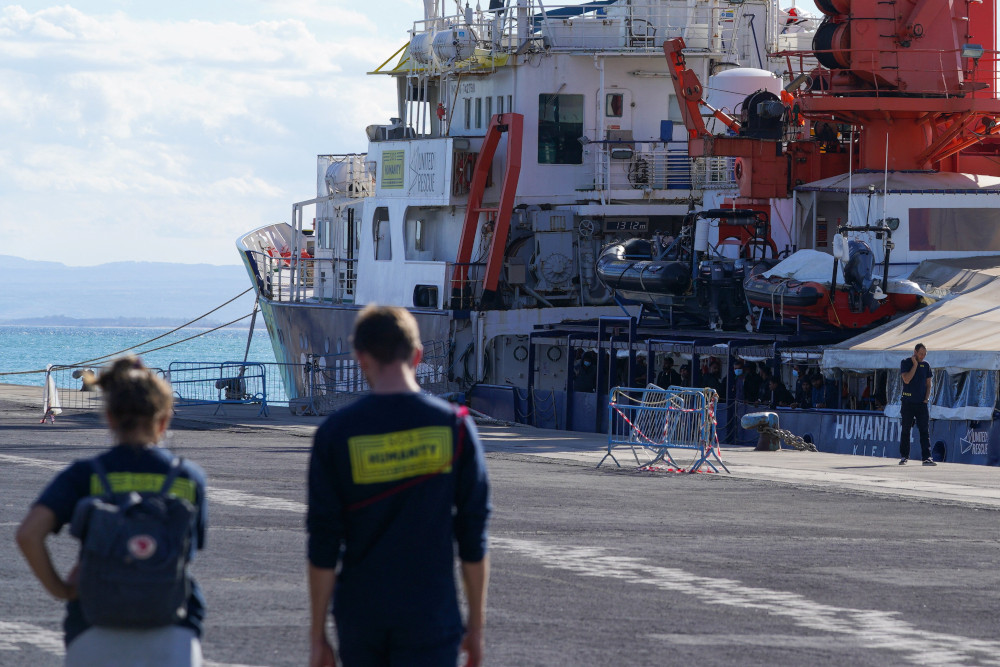 Pope Francis avoided a direct confrontation with Italy's new government over immigration policies, but he still insisted "lives must be saved."

Returning to the Vatican from Bahrain Nov. 6, the pope was asked about the struggle that four humanitarian rescue boats were having in getting Italian government authorization to dock in a port and disembark the more than 1,000 migrants they had rescued from the Mediterranean over the previous two weeks.

The pope did not say anything he had not said before. What was new was the government of Italian Prime Minister Giorgia Meloni, who took office less than three weeks earlier. All along, Meloni had said her government would tighten immigration requirements, increase deportations and rebuff the ships that nongovernmental organizations run to rescue people trying to cross the Mediterranean.

"You know that today the Mediterranean is a cemetery, perhaps the largest cemetery in the world," the pope said.

But Francis agrees with one point Meloni and her Cabinet members have made. As he told reporters on his plane Nov. 6, "The European Union must take in hand a policy of collaboration and help; it cannot leave the responsibility for all the migrants" to the four countries where most arrive by sea: Cyprus, Greece, Italy and Spain.

And the pope praised the Italian government for allowing the most vulnerable passengers -- women, children and the sick -- to disembark from two of the rescue boats.

But he did not comment on the Italian government's order that the two ships -- the Humanity 1 and the Geo Barents -- return to sea with the 250 adult men the Italian government determined were not "vulnerable." The decree cited the need to maintain "public order and security" and noted that the migrants were taken onboard in waters outside of Italy's "search and rescue area."

As of Nov. 8, the captains of the two ships refused to leave the Catania port, saying international maritime law required them to disembark rescued passengers at the nearest safe port.

The German charity SOS Humanity said Nov. 7 it had filed a court case against the Italian government's order as a violation of the European Convention on Human Rights and has appealed in Catania for emergency asylum hearings for those still onboard.

In Reggio Calabria early Nov. 8, the ship Rise Above was allowed to disembark all 89 asylum-seekers it had rescued because, the government ruled, they were taken aboard in the Italian search and rescue zone.

But the Ocean Viking, a rescue ship with 234 passengers aboard, was still in international waters Nov. 8 after repeated requests to Italy and Malta for a safe port.

The new Italian government is insisting that since Humanity 1 is a Germany-flagged ship and the other three rescue boats are flagged by Norway, those governments should be responsible for accepting the asylum-seekers and beginning their paperwork.

"Those stranded need to be disembarked swiftly without any further delay. We call on states in the region to protect the lives of those rescued by ending the current impasse and offering a place of safety for disembarkation," said a statement Nov. 7 from the International Organization for Migration and the U.N. Refugee Agency.

The two agencies agreed with Francis that "a piecemeal and ad-hoc approach" that "continues to leave coastal states alone cannot be pursued and is not sustainable." But, they said, "the priority must be on saving lives and respecting human dignity."

The statement also noted that "at least 1,337 people have gone missing on the Central Mediterranean migration route this year," and that "most of the 88,000 people who arrived by sea to Italy in 2022 have been rescued by the Italian Coast Guard and other Italian state-led rescue ships or arrived autonomously." Only 15% were rescued by vessels from nongovernmental agencies, although many in Meloni's government accuse the NGO vessels of facilitating illegal immigration.

Archbishop Luigi Renna of Catania and representatives of the archdiocesan Caritas and the Community of Sant'Egidio visited late Nov. 6 with the asylum-seekers allowed to disembark from the Geo Barents. Caritas and Sant'Egidio have offered to help the government resettle all of the passengers onboard.

"The need expressed by the Ministry of the Interior that Italy not be left alone in the face of the huge number of migrants knocking on Europe's doors is more than just," the archbishop said in a statement.

But fixing the situation requires a political solution by the European Union countries, which will take time, he said. "Clearly one cannot wait for the process of a political and legislative debate to end without, in the meantime, ensuring the safety of so many people, created in the image of God like each one of us, who cannot be left to wander the Mediterranean or be rejected without falling into despair or even losing the priceless gift of their lives."