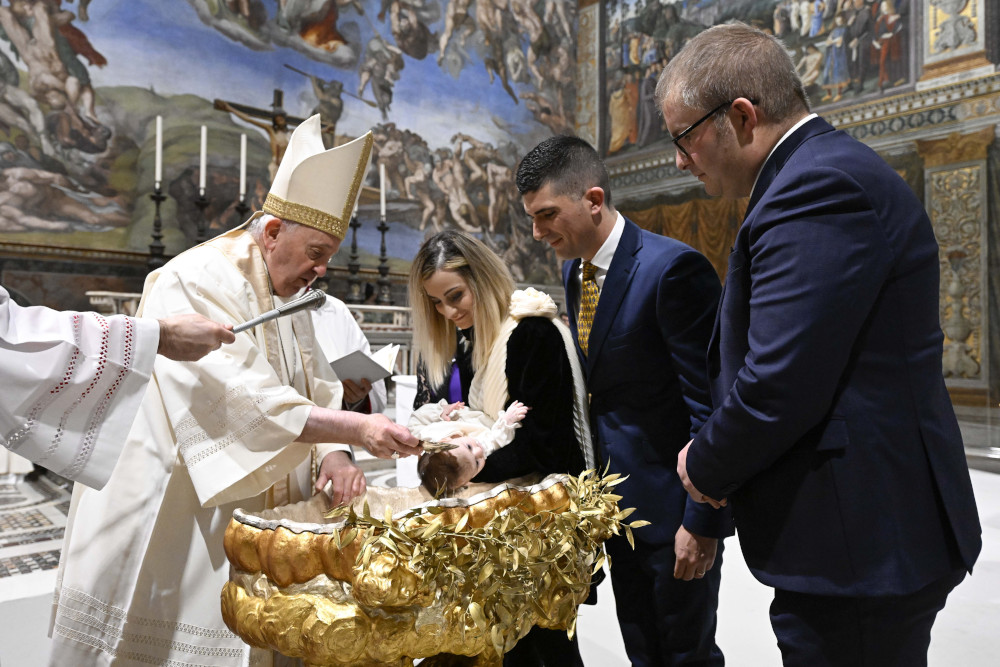 Pope Francis baptizes one of 13 babies during a Mass celebrating the feast of the Baptism of the Lord in the Sistine Chapel at the Vatican Jan. 8, 2023. (CNS photo/Vatican Media)

Telling parents and godparents to teach their little ones to pray from the time they are small, Pope Francis baptized 13 babies in the Sistine Chapel as their older brothers and sisters looked on -- or got away and ran around.

With his knee apparently improving, Francis walked with a cane from his seat to a lectern to give his homily standing -- something he has not done at a public Mass for months -- and rolled up his sleeves and stood at the font as he poured water over the heads of the infants, children of Vatican employees.

The annual baptism Mass in the Sistine Chapel is celebrated on the feast of the Baptism of the Lord, which the Vatican and Italy celebrated Jan. 8 this year.

Francis began his homily by thanking the parents for deciding to have their children baptized and asking them to remind the children throughout their lives of the date of their baptism since "it is like a birthday because baptism is a rebirth to the Christian life."

"May they remember and thank God for this grace of having become Christians," he said.

Baptism is the beginning of a journey, he said, and it is up to parents and godparents to support the children as they take their steps along the way.

The first task, he said, is to teach the children to pray from the time they are very small, starting with showing them how to make the sign of the cross and how to hold their hands in prayer.

"Prayer will be what gives them strength throughout their lives -- in good times to thank God and in the difficult times to find strength," the pope said. "It's the first thing you must teach: how to pray."

They also should teach children to pray to Mary, who "is the mother, our mother," the pope said. "They say that when someone is mad at the Lord or has distanced himself from him, Mary is always nearby to show the path to return."

As he does every year, Francis also reassured the parents, telling them not to worry if the babies cry during Mass or need to be fed or fuss because they are too hot or too cold. "Make them comfortable; everyone should be comfortable," he said.

Later, reciting the Angelus at midday with visitors in St. Peter's Square, Francis focused on the meaning of the feast of the Baptism of the Lord, and he quoted the late Pope Benedict XVI in doing so.

In his homily on the feast day in 2008, Francis said that "Benedict XVI affirmed that 'God desired to save us by going to the bottom of this abyss himself so that every person, even those who have fallen so low that they can no longer perceive heaven, may find God's hand to cling to and rise from the darkness to see again the light for which he or she was made.'"

Francis told the crowd in the square, "The Lord is always there, not ready to punish us, but with his hand outstretched to help us rise up."

Too often, the pope said, people think that God administers justice like human beings do: "those who do wrong pay, and in this way compensate for the wrong they have done."

But, he said, "God's justice, as the Scripture teaches, is much greater: it does not have as its end the condemnation of the guilty, but their salvation and rebirth, making them righteous."

God's justice, he said, "comes from love, from the depths of compassion and mercy that are the very heart of God, the father who is moved when we are oppressed by evil and fall under the weight of sins and fragility."

Jesus came into the world "to take on his own shoulders the sin of the world and to descend into the waters of the abyss, death, so as to rescue us from drowning," the pope said.