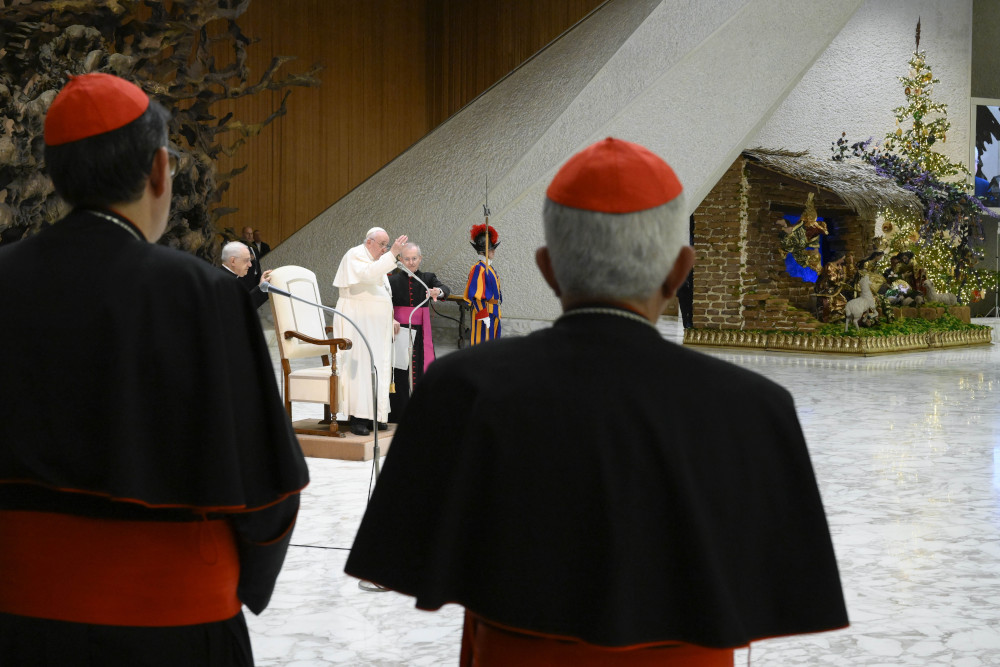 Cardinals are seen as Pope Francis delivers his blessing during his general audience in the Paul VI hall at the Vatican Dec. 7, 2022. (CNS photo/Vatican Media)

Pope Francis and his international Council of Cardinals met in-person at the Vatican Dec. 5-6, discussing the continental phase of the synod process, safeguarding and the U.N. climate change summit, the Vatican press office said.

Also, "the meeting was an opportunity for a mutual exchange of updates on some current affairs in different key geographical areas and for an overall assessment of the council's progress in recent years," the Vatican said in a written communique Dec. 7.

According to the Vatican press office, the pope and cardinals spent the first day reflecting on the discussions and outcomes of the 27th U.N. Climate Change conference, or COP27, held in November in Sharm El Sheikh, Egypt, following reports given by Parolin and Ambongo Besungu.

The second day they discussed the continental phase leading to the Synod of Bishops 2023-24 after hearing a report from Cardinal Mario Grech, synod secretary-general, which included what came out of synod surveys and outreach done online in collaboration with the Dicastery for Communication.

O'Malley also gave a report on the latest efforts by the Pontifical Commission for the Protection of Minors regarding serving the world's bishops' conferences and the Roman Curia. The cardinal has been president of the commission since its establishment in 2014.

Gracias presented a report about the general assembly of the Federation of Asian Bishops' Conferences, which was held in Bangkok in October and attended by more than 150 bishops from 29 countries in Asia.

The cardinals also took part in a Mass in St. Peter's Basilica Dec. 5 to remember the late-Cardinal Richard Kuuia Baawobr of Wa, Ghana, who died in Rome Nov. 27 at the age of 63.

The council is scheduled to meet again in April.