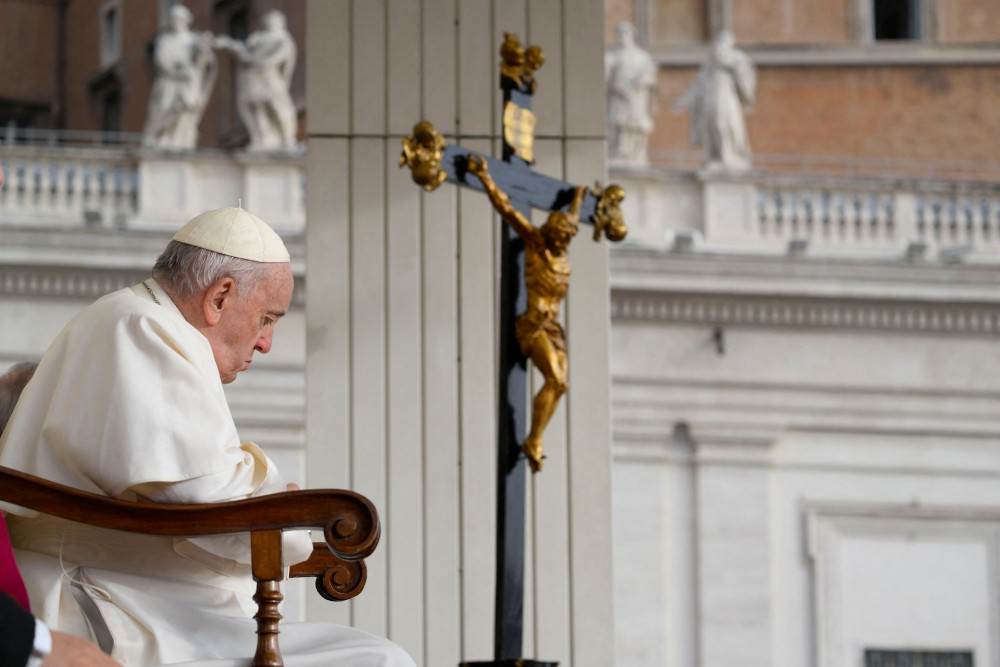 Pope Francis pauses during his general audience at the Vatican Oct. 26, 2022. (CNS photo/Vatican Media via Reuters)

Pope Francis condemned an attack on a Congolese village that led to the deaths of seven people, including a nun, after gunman looted and burned homes and a local health center.

Before concluding his weekly general audience Oct. 26, the pope said he was "horrified" by the attack which continues "to stain the Democratic Republic of Congo with blood."

"I express my firm condemnation for the unacceptable assault that took place in recent days in Maboya, North Kivu province, where unarmed people, including a religious woman involved in health care, were killed," the pope said.

"We pray for the victims and their families, as well as for the Christian community and the inhabitants of that region who have been exhausted by violence for too long," he said.

According to Fides, the news agency of the Dicastery for Evangelization, the attack occurred the evening of Oct. 19 when militants looted and burned several homes before destroying a health center run by the Diocese of Butembo-Beni.

Sr. Marie-Sylvie Kavuke Vakatsuraki, a member of the Little Sisters of the Presentation of Our Lady in the Temple who served as a doctor, and one of her patients was killed after militants set fire to the health center.

In an interview with Aid to the Church in Need published Oct. 24, Fr. Marcelo Oliveira, head of the Comboni Missionaries in Congo, said that when she realized the village was under attack, Kavuke Vakatsuraki called the local parish to warn them, allowing priests and religious men and women there to escape.

Francis also renewed his call for peace in "martyred Ukraine," where Russia's ongoing war entered its eighth month. According to the Associated Press, Ukrainian authorities have called on its citizens to not return home as Russia continued its attacks on the country's energy infrastructure.

"May the Lord protect those people and bring us all to the path of lasting peace," the pope said.