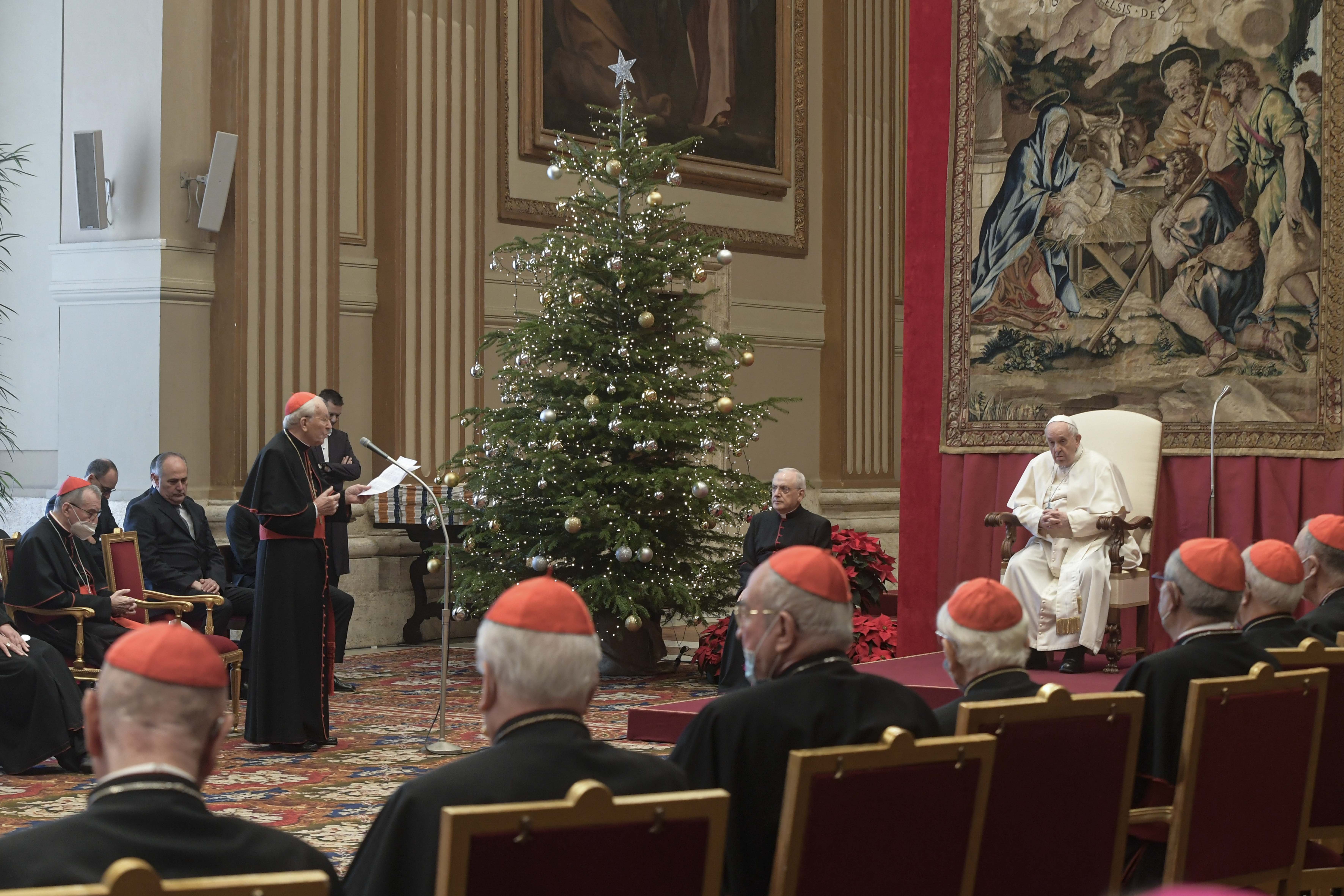 Cardinal Giovanni Battista Re, dean of the College of Cardinals, offers Pope Francis best wishes for Christmas on behalf of the cardinals and top officials of the Roman Curia during an audience in the Apostolic Palace at the Vatican Dec. 23, 2021. (CNS photo/Vatican Media)

Pope Francis on Dec. 22 warned top Vatican officials against the temptation of believing the Catholic Church is no longer in need of conversion and said that creating a pure church only for the pure would be a return to heresy.

"The worst thing that could happen to us is to think that we are no longer in need of conversion, either as individuals or as a community," said Francis. "Where the Gospel is concerned, we are always like children needing to learn. The illusion that we have learned everything makes us fall into spiritual pride."

In his annual pre-Christmas address to the Roman Curia — the Vatican's central bureaucracy — the pope recalled the Second Vatican Council, saying that the conversion of the church sparked by the council 60 years ago must continue in order to preach the "Gospel more fully and to make it relevant, living and effective in our time."

Francis went on to draw a parallel between Vatican II and the current synod process, an ongoing consultation with the world's Catholics, which has unleashed lively discussion on how the church can best evangelize in the modern world and how to navigate a number of topics once considered taboo in the Catholic Church, such as the role of women, LGBTQ persons and the clergy sex abuse crisis.

"Our current reflection on the church’s synodality is the fruit of our conviction that the process of understanding Christ’s message never ends, but constantly challenges us," said the pope.

For Francis, the opposite of conversion is "immobility," which he said is "the secret belief that we have nothing else to learn from the Gospel."

"This is the error of trying to crystallize the message of Jesus in a single, perennially valid form," he warned. "Instead, its form must be capable of constantly changing, so that its substance can remain constantly the same. True heresy consists not only in preaching another gospel, as St. Paul told us, but also in ceasing to translate its message into today’s languages and ways of thinking, which is precisely what the Apostle of the Gentiles did."

"To preserve means to keep alive and not to imprison the message of Christ," he added

While in past years Francis has used the annual address to the curia to chide Vatican officials for obstinacy towards his reform efforts or for possessing certain "spiritual diseases" that hamper their work, this year's address was more conciliatory than past remarks. It also was shorter, clocking in at just 20 minutes.

"If there are times when I say things that might sound harsh and pointed, it is not because I don’t believe in the value of kindness and persuasion," the pope acknowledged. "Rather, it is because it is good to keep our caresses for the weary and the oppressed, and to have the courage to 'afflict the comfortable.'"

In examining the church's need for ongoing conversion, the pope told the heads of Vatican offices that often "we put too much trust in ourselves, our strategies and our programs" and that many of the church's failings come from not putting Christ at the center of its activities.

He also warned that those who work at the center of the church may think they are immune to the need to examine their own attitudes and practices.

"We need to pay greater attention to the fact that, in a formal sense, we are now living 'at home,' within the walls of the institution, in the service of the Holy See, at the heart of the church," he cautioned. "Precisely for this reason, we could easily fall into the temptation of thinking we are safe, better than others, no longer in need of conversion."

As the pope delivered his tenth annual curia address, he acknowledged the ongoing war against Ukraine, as well as other violent conflicts in the world, saying that if peace is desired, it must begin with personal commitments to forgiveness and mercy and a rejection of bitterness, backbiting and resentment.

"If we truly want the din of war to cease and give way to peace, then each of us ought to begin with himself or herself," said Francis. "St. Paul clearly tells us that kindliness, mercy and forgiveness are our medicine for building peace."

As Francis concluded his remarks, he warned against the "heresy" of creating a pure church, only for the pure, citing the 12th century Gnostic sect of Catharism who believed they were only the true Christians.

"Were that the case, the Gospel and the Bible as a whole would not have told us of limitations and shortcomings of many of those whom today we acknowledge as saints," he said.

At the end of the meeting, Francis greeted the cardinals and bishops present one-by-one and gave each a copy of two books: Life of Jesus by Andrea Tornielli, editorial director of the Vatican's Dicastery for Communication, and Let's Go to the Other Shore, a book-interview by Italian priest, Fr. Benito Giorgetta with a former member of the mafia, Luigi Bonaventura.

Both books include introductions penned by Francis.