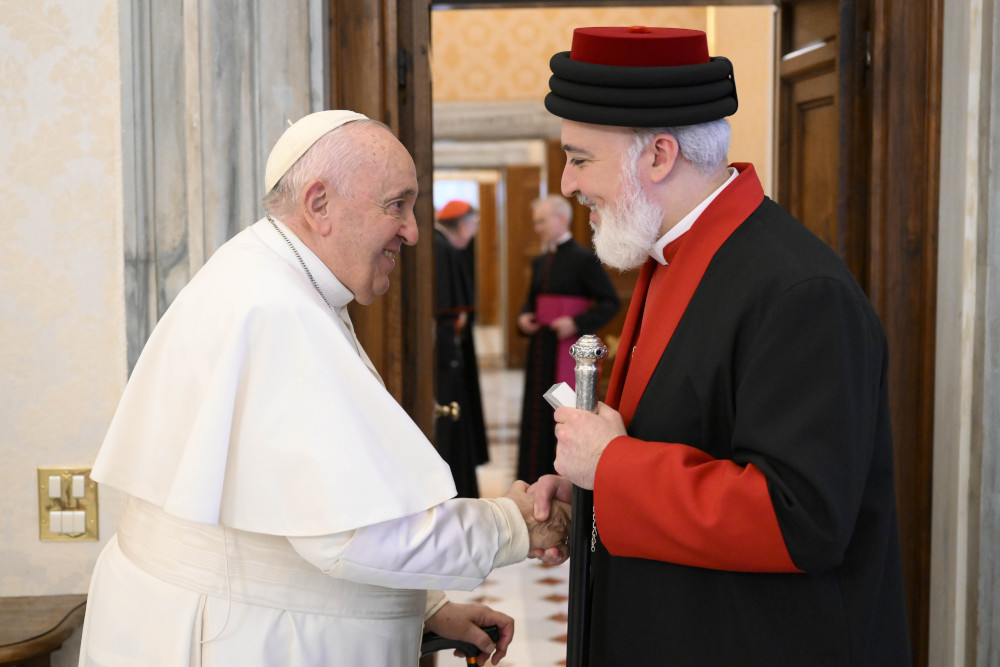 Pope Francis shakes hands with Catholicos Awa III, patriarch of the Assyrian Church of the East, at the end of a meeting Nov. 19, 2022, in the library of the Apostolic Palace at the Vatican. (CNS photo/Vatican Media)

Meeting the U.S.-born patriarch of the Assyrian Church of the East, Pope Francis expressed his hope that Christians of the East and West could finally agree on a common date for celebrating Easter.

"Let us have the courage to put an end to this division that at times makes us laugh" with the ridiculous possibility that Christians could ask each other, "When does your Christ rise again?" the pope told Catholicos Awa III, the patriarch of the Assyrian Church of the East.

The catholicos, who was born in Chicago, was elected head of the church in September 2021 and made his first official visit to the Vatican Nov. 19, before Francis left to visit his relatives in the northern Italian city of Asti.

"I wanted to share lunch with you," the pope told him, "but I have to leave at 10:30. Please excuse me! I would not want it to be said that this pope is a bit stingy and does not invite us to lunch! I would love to share the table, but there will be other opportunities."

The Assyrian Church of the East, which is not in full communion with any of the Orthodox or Oriental Orthodox churches, began a theological dialogue with the Vatican in the mid-1990s.

During their meeting, Awa mentioned his hope and the hope of many other Christians to find a way to celebrate Easter on the same day.

Francis thanked him and said, "I want to say -- indeed, to repeat -- what St. Paul VI said in his day: We are ready to accept any proposal that is made together."

In 2025, the pope noted, Christians will celebrate the 1,700th anniversary of the Council of Nicaea, and the Gregorian and Julian calendars will align that year so that Christians of the East and West will celebrate Easter on the same day.

Christian leaders should "be courageous and search together" for a solution that will bring a common celebration of Easter every year, the pope said. "I'm willing, yet not me, the Catholic Church is willing to follow what St. Paul VI said. Agree and we will go where you say."

Francis was referring to an appendix to the Second Vatican Council's 1963 Constitution on the Sacred Liturgy, promulgated by Pope Paul. The declaration "on revision of the calendar" said council members "would not object if the feast of Easter were assigned to a particular Sunday of the Gregorian calendar, provided that those whom it may concern, especially the brethren who are not in communion with the Apostolic See, give their assent."

Since that time, the Vatican's position consistently has been that if Eastern Christians agree on a way to determine a common date for Easter, the Catholic Church would accept it.

But the Julian calendar, which is what Christians used in the fourth century, was increasingly out of sync with the actual solar year, so March 21 -- generally assumed to be the date of the Northern Hemisphere's spring equinox -- gradually "drifted" away from the actual equinox.

In 1582, Pope Gregory XIII, relying on the work of the best astronomers of his time, reformed the calendar, dropping 10 days and making the equinox fall on March 21 again. Most Eastern Christians did not adopt the new calendar, leading to a situation where Easter occasionally is on the same day, but Eastern Christians' celebration can be as much as four weeks later.