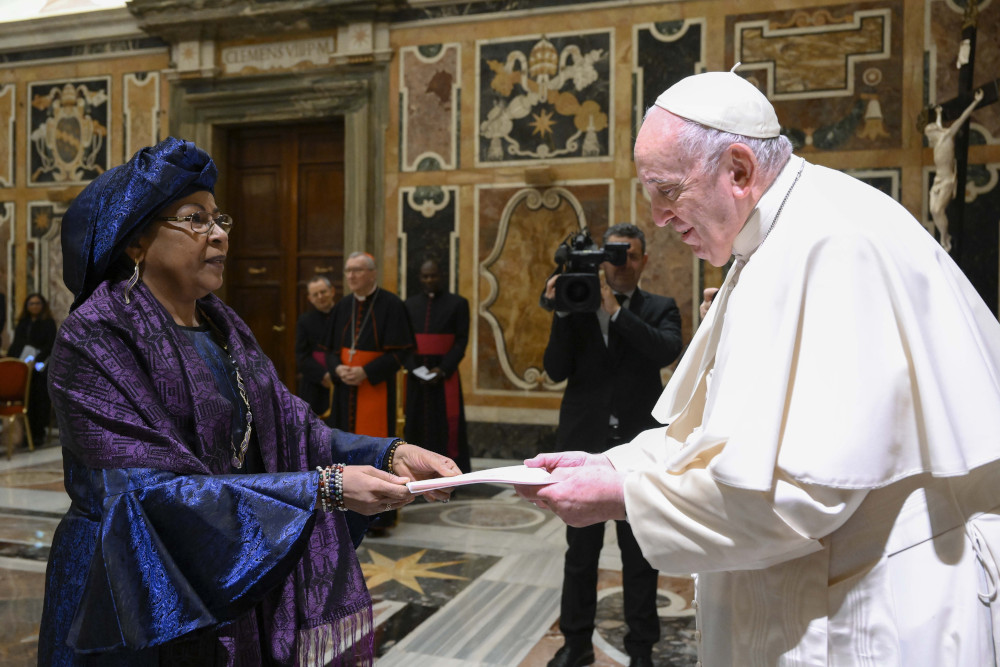 The only way "to protect the dignity and human rights of all, to promote justice, reconciliation and dialogue for the sake of enduring peace and to care for our common home" is to strengthen diplomacy and collaboration among nations, Francis said.

Welcoming new ambassadors to the Vatican from Belize, Bahamas, Thailand, Norway, Mongolia, Niger, Uganda and Sudan Dec. 15, the pope thanked the nations they represent for the many ways they contribute "to the common good not only of their citizens but of our entire human family."

He encouraged them to increase such efforts saying, "your resourcefulness and talents are also gifts that can be placed at the service of the wider world, in both bilateral and multilateral contexts, for the betterment of humanity."

"In this vital and collective task of striving to safeguard and advance the well-being of men and women everywhere, especially in these days marked by the continued problems associated with the global health crisis and by the entrenched violent conflicts around the world, the concerted action of the whole family of nations and the work of diplomacy are required more than ever," the pope said.

"Indeed, it is only by striving to confront the problems facing humanity in an increasingly integrated and solidary way that solutions may be found," he said.

"If peace is to have a chance and the poor the prospect of a better future," the pope said, "we are all called to show greater vigilance and respond to the call to be peacemakers in our time."

Other challenges the pope said are impacting fundamental human rights and require greater attention from the international community include: "the lack of universal access to drinking water, food or basic health care; the need for equitable access to education for those all too often excluded; as well as the opportunity for dignified work for all."

Francis said efforts must be made to ensure that all opportunities are open and accessible to those who are often marginalized, such as those who are sick, have disabilities, young people, "girls -- who are frequently given insufficient opportunities for realizing their potential -- and all those from impoverished backgrounds at risk of being left behind, forgotten or even deliberately excluded from fully participating in their communities."

"It is my hope that in the exercise of your high duties, you will be able to seek, both here in Rome and elsewhere, fresh and creative ways of promoting solidarity and social friendship, particularly with the most vulnerable of our brothers and sisters," he said.