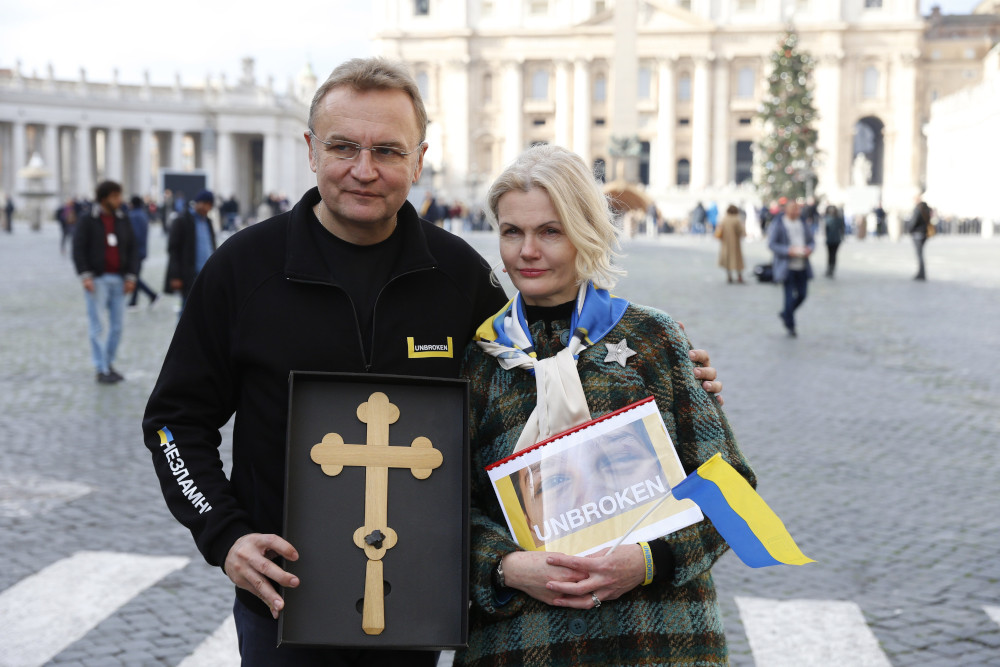 Andriy Sadovy, the mayor of Lviv, Ukraine, pictured with his wife, Kateryna Kit-Sadova, holds a cross containing a piece of shrapnel removed from a child injured in the war, as he speaks with journalists after attending Pope Francis' general audience at the Vatican Dec. 7, 2022. The mayor and doctors from the city asked Pope Francis' blessing for "Unbroken," a project to build a medical and pyschiatric rehabilitation facility for victims of the war. (CNS photo/Paul Haring)

The mayor of Lviv, Ukraine, and a team of doctors treating those injured in the war gave Pope Francis a cross with an embedded piece of shrapnel removed from the body of a young girl.

"Giving the pope the cross, we hope he will pray each day for the injured children," the mayor, Andriy Sadovy, told reporters Dec. 7 after meeting the pope at the end of his weekly general audience.

Francis asked everyone at his audience to pray that Mary would comfort every person living under the brutality of war, especially the people of Ukraine.

The pope also noted the commemoration of the 80th anniversary of "Operation Reinhard," the Nazi plan to kill the Jews of German-occupied Poland, a plan that succeeded in murdering some 2 million Jews.

"May the memory of this horrible event arouse in all of us resolutions and actions for peace," the pope said, before adding that "history repeats itself. We see what is happening today in Ukraine. Let us pray for peace."

Dr. Oleh Samchuk, general director of a Lviv hospital, the First Territorial Medical Association, accompanied the mayor and other officials seeking not only Francis' prayers, but also his blessing for the Unbroken National Rehabilitation Center, a facility they hope will bring physical and psychiatric healing to the victims of Russia's war on Ukraine.

"We showed the pope our project, and he blessed it," Sadovy said.

Since Russia launched its war in late February, the major said, more than 5 million Ukrainians fleeing the fighting have come to Lviv, a major city in Western Ukraine. While most continued on to safety in neighboring European countries, Lviv became a major hub for assisting those displaced by war and for organizing aid to cities and towns in need in the East.

The displaced, he said, have included 11,000 injured people, "mostly women and children," who required surgery.

Samchuk's hospital is always full, he said, but staffers keep doing everything possible to heal the injured, including by setting up a workshop to make prosthetics.

As of early December, the hospital also had fitted two patients with bionic arms, thanks to the work of a U.S.-Ukrainian company, Esper Bionics, aided by the Netherlands-based Symphony Solutions.

The project website -- unbroken.org.ua -- says, "Our goal is to help Ukrainians remain 'unbroken' and get all the necessary help here, in their own country, near their families."