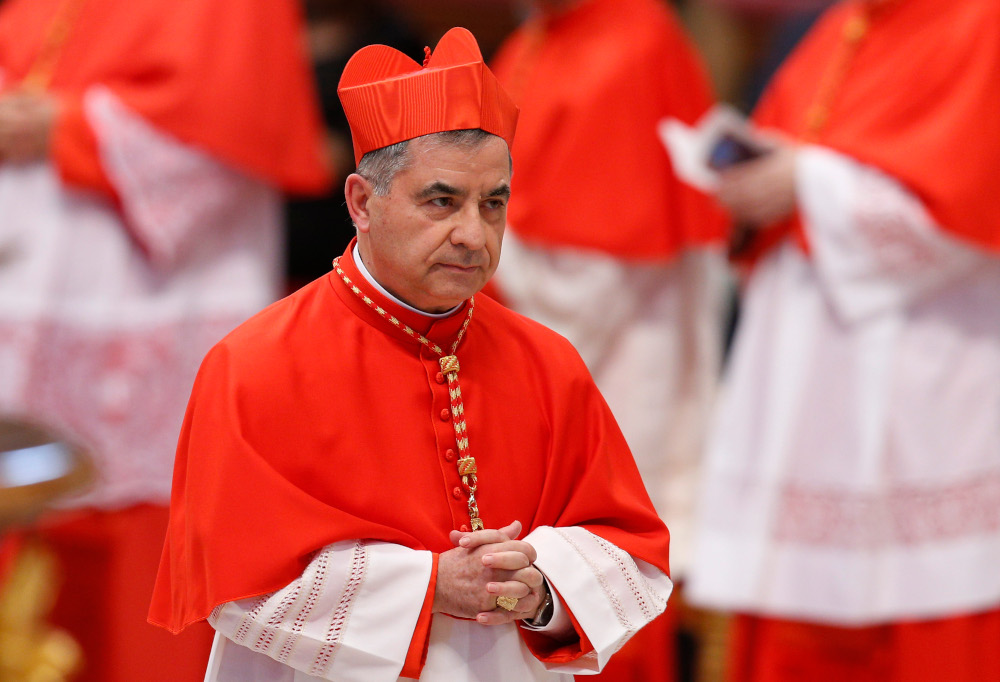 During a book presentation in Rome Feb. 17, 2020, Italian Cardinal Giovanni Angelo Becciu, prefect of the Congregation for Saints' Causes, denied allegations that money earmarked for helping the poor was used to invest in a London property deal. He is pictured in a June 28, 2018, photo. (CNS/Paul Haring)

Italian Cardinal Giovanni Angelo Becciu, prefect of the Congregation for Saints' Causes, denied allegations that money earmarked for helping the poor was used to invest in a London property deal.

During a book presentation in Rome Feb. 17, Becciu said that accusations he used money from the annual Peter's Pence collection for the investment "made me suffer."

"I want to deny this because we did not use that money," he said. "Peter's Pence was not affected; an investment was made on a building. It was a good and opportune occasion, which many people envy us for today. With Brexit, the value of the building has tripled."

Becciu served as substitute secretary for general affairs in the Vatican Secretariat of State — a job similar to a chief of staff — from 2011 to 2018.

Stories about Becciu's involvement in the investment of the London property were published shortly after the announcement that Vatican police conducted a raid on offices in the Secretariat of State and the Vatican financial oversight office in early October.

The next day, the Italian magazine L'Espresso published an internal notice as well as leaked documents, alleging the raid was part of a Vatican investigation into how the Secretariat of State used $200 million to finance a property development project in London's Chelsea district in 2014.

According to the leaked documents, the Vatican Secretariat of State eventually purchased a majority stake in the London property in 2018 and incurred debts from deal.

At the book presentation, Becciu said he spoke with Pope Francis about the property investment and that, ultimately, "the pope will decide whether it is to be maintained or sold but there are no losses."

He also repeated his defense of the purchase, saying that making property investments in Rome and abroad were a common Vatican practice.

Although money from the poor was untouched and even "gained interest," Becciu said that the annual Peter's Pence collection "was not born for the poor" but rather meant to "help the pope in the management of structures and in his charitable activity."

According to its website, donations to Peter's Pence — a collection taken on or near June 29 every year in dioceses around the world — are used to "sustain the work of evangelization and, at the same time, to help the poor in whatever way is possible."

While Peter's Pence donations are used to help the poor, the Vatican always has said the collection also funds the Roman Curia, which are the offices designed to help the pope exercise his mission of governing the universal church.

The October raid was also part of investigation into five individuals, including Tomasso Di Ruzza, director of the Financial Intelligence Authority, known by the Italian acronym AIF.

Toward the end of October, however, the Vatican announced that the internal investigations revealed that neither Di Ruzza nor any AIF member were "engaged in any wrongdoing."

Commenting on the fact that the other four individuals still under investigation were once his close collaborators at the Vatican Secretariat of State, Becciu said they were being investigated on "facts that occurred between February 2019 to October 2019," long after he left the office to lead the Congregation for Saints' Causes.

"I can speak because I am not among the suspects" under investigation, the Italian cardinal said.

"As for my collaborators, I have known them as honest people, dedicated to duty and faithful. Let's wait. I have faith in the judiciary," he said, adding that his former co-workers "are suffering so much."