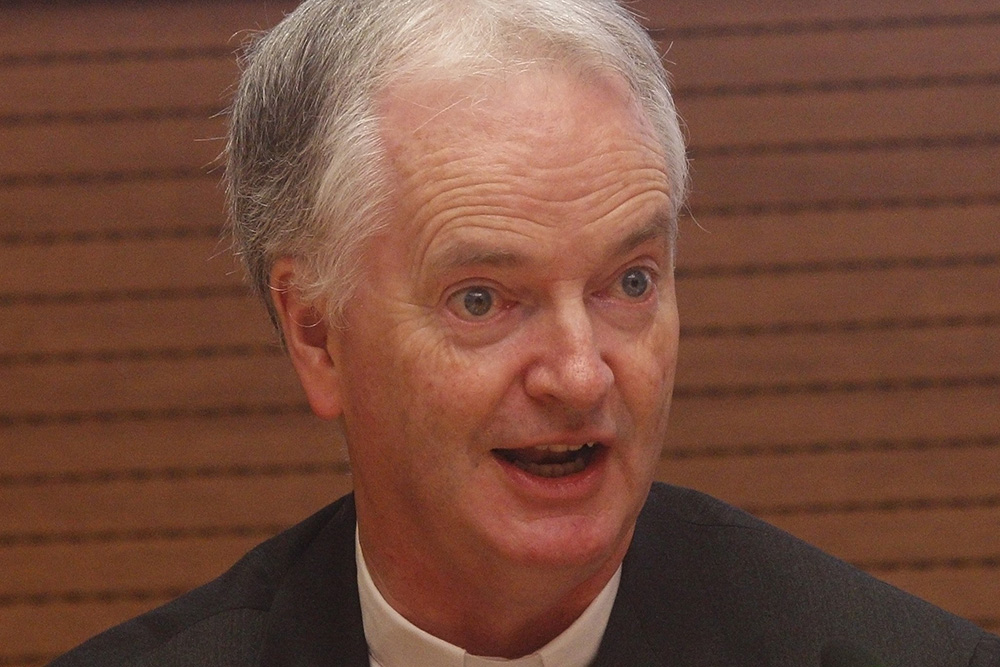 Bishop Paul Tighe speaks during a conference at the Vatican in 2019. (CNS/Robert Duncan)

At the official opening of Australian Catholic University's expansive new campus here in the Eternal City last month, its chancellor, Martin Daubney, remarked that the location would provide students from Down Under the opportunity to come to the "headquarters" of the Catholic Church for a period of study and immerse themselves in the drama of Catholicism.

When Bishop Paul Tighe, a secretary for the Vatican's Dicastery for Culture and Education, delivered the evening's keynote address, he offered a slight (and friendly) corrective that Rome should be thought of more as a hub of the global church, rather than its headquarters.

It's an understanding that Tighe says aligns with Pope Francis' new constitution for the Vatican, Praedicate Evangelium ("Preach the Gospel"), which after nine years in the making was released last March with a goal of improving and decentralizing church governance.

When we met a few weeks after the campus opening, Tighe — who is one of the most avuncular and down-to-earth priests in a city overrun with ambitious clerical types  — specifically cited one passage of the constitution that states that the Roman Curia, the Vatican's central bureaucracy, "is not set between the Pope and the Bishops, but is at the service of both."

"The best way to think of the Curia," Tighe told me, "is as a network of networks."

While Rome is at the center of that network, Tighe's philosophy — and one he encouraged administrators and students of Australian Catholic University to share — is that the Vatican's real strength comes from its ability to bring together different networks from the outside.

"People from outside view Rome as a corporate headquarters," he remarked. But unlike other global enterprises or governments, the overwhelming number of the church's "staff" is not in Rome.

'The best way to think of the Curia is as a network of networks.'

"Yes, Rome is the center of governance," Tighe continued, "but more importantly it's a symbolic center of unity."

As Tighe put it in another talk to the International Office of Catholic Education in December, "At its best, the Curia can serve as a type of hub which exists to build lines of communication, and ultimately communion, between the different communities — facilitating their sense of connection to the universal church while promoting their cooperation among themselves."

Both Tighe, who hails from Ireland, and English Archbishop Paul Gallagher, the Vatican's foreign minister, who presided over the official blessing of the new Rome campus for Australian Catholic University, reflected on coming to Rome as students in the early 1980s and the ways in which it opened their eyes to the different ways of being Catholic that contrasted to the respective church cultures of their youth.

"I came from a small island with a very defined understanding of what church is," the 64-year-old Tighe told me. Coming to Rome, he said, "brought me away from an Irish perspective and gave me a global perspective, not just a Roman one."

After returning to his homeland, where he served in a number of education and communication posts, Tighe was brought back to Rome in 2007 to serve as secretary to the Pontifical Council for Social Communications, an office that eventually merged into the Vatican's Secretariat for Communication.

Reflecting on that time, he noted that Vatican II had decreed that every bishops' conference and diocese have its own communications office, whereas Tighe's team at the Vatican consisted of fewer than 15 individuals.

Looking back on that experience, Tighe said that he could recall moments of hearing of proposed projects or initiatives in places like the United States or Thailand and how he could refer respective local churches to the other to better understand best practices and what worked and didn't work.

The idea, he said, was not that a boss in headquarters was directing how the job was supposed to be done, but steering folks in the right direction based on where he knew actual expertise was located.

"The real strength of our reality was around the world," he reflected. "It was almost like a bureaucratic indication of subsidiarity so that the strength would be at the local level."

The Vatican — as an ecclesial hub — is able to meet with representatives of various bishops' conferences coming through Rome or international communication organizations and experts and serve as what he described as "a privileged listening place."

While there isn't the strength of money or personnel size, Tighe says the connections and the networks it creates is hard to rival.

Tighe also believes that Francis' new emphasis on synodality — an ongoing consultation process for the world's Catholics that has included listening sessions in almost every diocese of the globe — only further underscores this notion.

"It allows people at the local church to discern what we can deal with or what we have to send in for a more global reflection," he said.

Synodality, he says, doesn't depend on a "monopolistic presence" but instead allows for discernment at a local, particular level.

"If synodality manages to find consensus, with all the difficulties of a polarized world,” Tighe added, "that's quite an achievement."

After serving over 15 years here, Tighe believes that the biggest asset the location of the Vatican has to offer is not as a top-down, vertical position of power, but rather the vantage point of being at the crossroads of a global church.

"What you want," he said, "is people with enough expertise to recognize the expertise and have credible convenors to build the strength of the church."