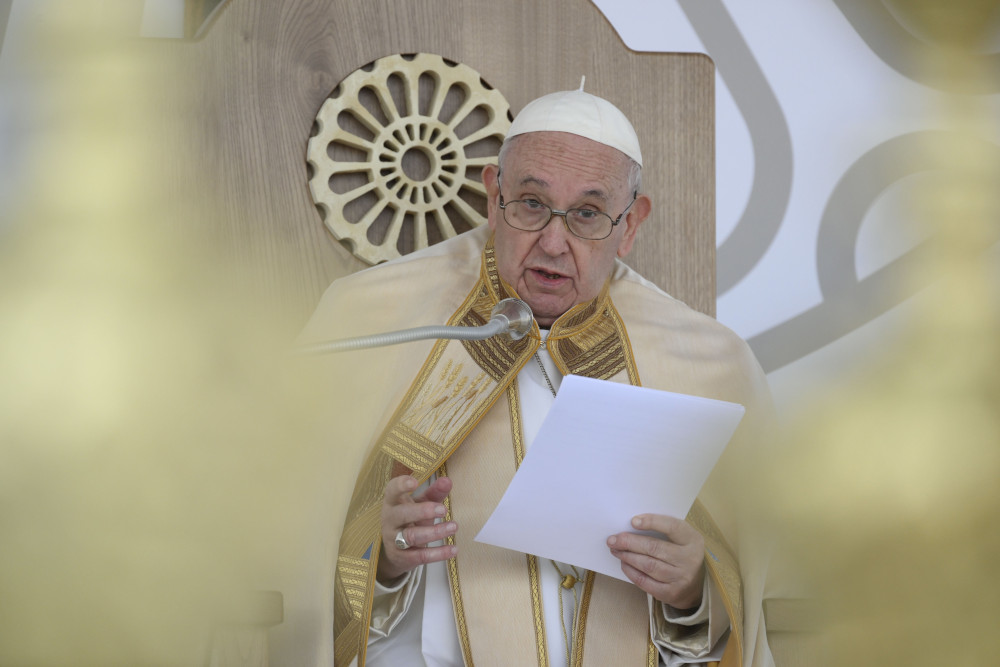 Marking the World Day of Migrants and Refugees, Pope Francis called on everyone to work together to build a more inclusive and fraternal future.

"Migrants are to be welcomed, accompanied, supported and integrated," he said Sept. 25 before praying the Angelus with those gathered for an outdoor Mass closing Italy's National Eucharistic Congress in the southern city of Matera.

"Let us renew our commitment to building the future in accordance with God's plan: a future in which every person may find his or her place and be respected; in which migrants, refugees, displaced persons and the victims of human trafficking may live in peace and with dignity," he said.

"It is also thanks to those brothers and sisters that communities can grow on a social, economic, cultural and spiritual level; and the sharing of diverse traditions enriches the people of God," he said. "Let us all work together to build a more inclusive and fraternal future!"

The pope also made urgent appeals for peace in Myanmar, Ukraine and Cameroon.

Addressing the crisis in Myanmar, the pope said that "for more than two years that noble country has been martyred by serious armed clashes and violence, which have caused many victims and displaced persons."

"This week I heard the cry of grief at the death of children in a bombed school. One can see it has become a fad to bomb schools today," he said.

"May the cry of these little ones not go unheard!" the pope said. "These tragedies must not happen!"

At least 13 people were killed, 11 of them children, when they were fired upon by helicopter airstrikes and by troops affiliated with the nation's ruling military junta Sept. 16. Another 15 children were reported to be missing from the school in a Buddhist monastery in the village of Let Yet Kone, in north central Myanmar.

Myanmar's military-ruled government has denied reports it was responsible for the air attack, while witnesses told The Associated Press and other news outlets Sept. 20 that two helicopters fired at the school for about an hour, followed by a raid by dozens of soldiers firing their weapons; soldiers then took away more than a dozen children, AP and UNICEF reported.

Among his other appeals, Francis prayed that "Mary, Queen of Peace, comfort the martyred Ukrainian people and obtain from the heads of nations the strength of will immediately to find effective initiatives to bring the war to an end."

The pope also said he wanted to join the bishops of Cameroon appealing for the liberation of nine people, including five priests and a religious sister, kidnapped in the Diocese of Mamfe.

"I pray for them and for the populations of the ecclesiastical province of Bamenda: may the Lord give peace to hearts and to the social life of that dear country," the pope said.

The incident occurred Sept. 16 at St. Mary's Catholic Church, which was also burned down, in Nchang, in southwestern Cameroon. The kidnappers, identified only as separatists, were asking the church to pay a ransom of $50,000, a request the church has rejected.

For about six years now, Cameroon has been reeling from a separatist war, with people in the country's two English-speaking regions fighting to break away and form a new nation they call Ambazonia.

Official figures indicate that at least 4,000 people have been killed, more than 700,000 displaced and about 70,000 have found refuge in Nigeria.