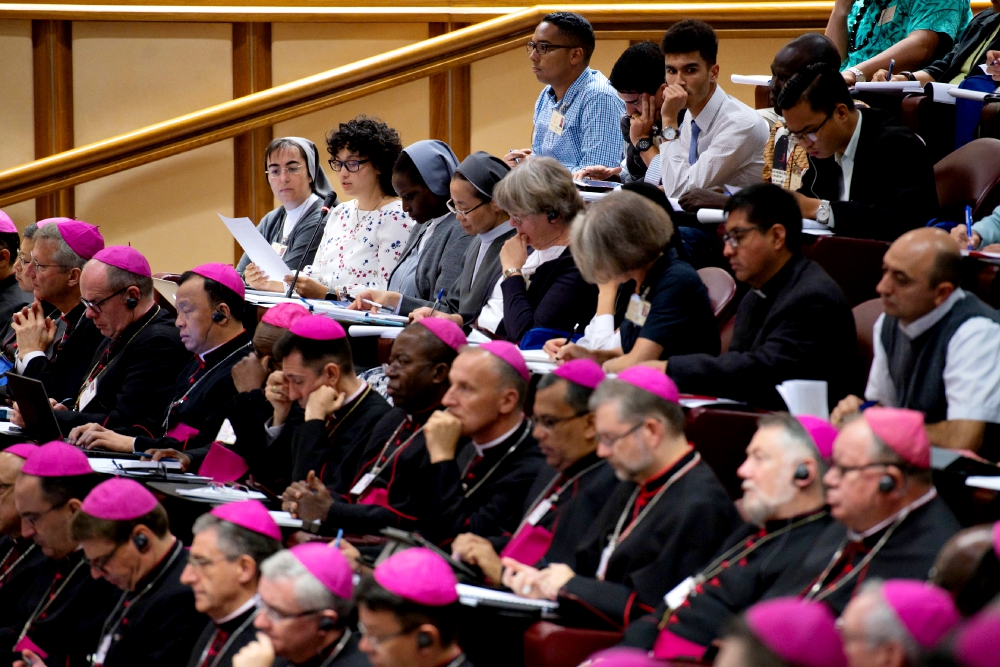 Women religious are seen at a session of the Synod of Bishops on young people, the faith and vocational discernment at the Vatican Oct. 4. (CNS/Vatican Media)

The two Rome-based umbrella groups representing nearly a million members of male and female Catholic religious orders around the world are planning to present Pope Francis with a proposal to give women a larger role in the Synod of Bishops.

Lasallian Br. Robert Schieler, one of two nonordained religious brothers serving as members in the ongoing Oct. 3-28 synod on young people, said the proposal is "to consider how, in future synods going forward, we can get more voice from the sisters."

Schieler, who leads the global De La Salle Brothers, said in an Oct. 15 interview that the umbrella groups are planning to ask the pope about both participation of more women religious and the possibility of giving those who take part the power to vote in the discussions.

"It's only right," said the brother superior, one of 10 members of the Union of Superiors General's council. "I mean, my God, the sisters are the ones who are every day with young people, more than any other group, in all kinds of capacities."

Although seven women religious have been allowed to take part in this month's synod, they are serving in non-member roles, meaning that while they can participate fully in the monthlong discussions, they are not being granted a vote on the gathering's expected final document.

According to the Catholic Church's theology, brothers and sisters have analogous roles. They are each nonordained, professed members of religious orders.

Schieler said that members of his umbrella group had asked synod officials about the discrepancy of allowing nonordained men but not nonordained women to have a vote at the gathering.

He explained that two of the people who helped draft the synod's working document, known as the instrumentum laboris, came to the biannual meeting of the Union of Superiors General last May.

"One of them did get the question about what the Vatican is saying about why the sisters cannot vote," said Schieler. "And he said, 'Well, because you have to be ordained to vote.' "

"I'm not ordained," Schieler said. "So I'm wondering, is that the reason or not?"

While the bylaws for the synod's operation mandate that 10 members of the men's umbrella organization take part in the gathering, they do not mandate a role for those from the women's group. But women religious have been invited as nonmembers to at least the past several synods.

Schieler, one of 10 synod members elected by his organization, said the Union of Superiors General consciously decided that it wanted one of its synod representatives to be a brother and not an ordained priest.

"It's important for the bishops ... to hear voices of religious, whether they're priests, brothers or sisters, who work with young people," Schieler said.

The second brother taking part in the synod is Marist superior general Br. Ernesto Sánchez Barba, who Schieler said was chosen by the Union of Superiors General to attend the gathering after one of their originally elected 10 delegates was unable to do so.

Schieler said that while he is a brother, he also thinks of himself as a layperson, referencing the vision of his order's founder, 17th-century St. Jean-Baptiste de la Salle.

"La Salle founded a group of laymen, and he did not get them organized into a religious community," Schieler said. "This was a ministry of laypeople."

"I see myself in that context, that, echoing the Second Vatican Council, it's our baptismal vows first that call us to mission and send us," he said. "For me, that's the important message here, that all of us, by our baptism, have a vocation, have a mission in the church."

This story appears in the Synod on the Youth 2018 feature series. View the full series.
A version of this story appeared in the Nov 2-15, 2018 print issue under the headline: Religious outline larger synod role for women.