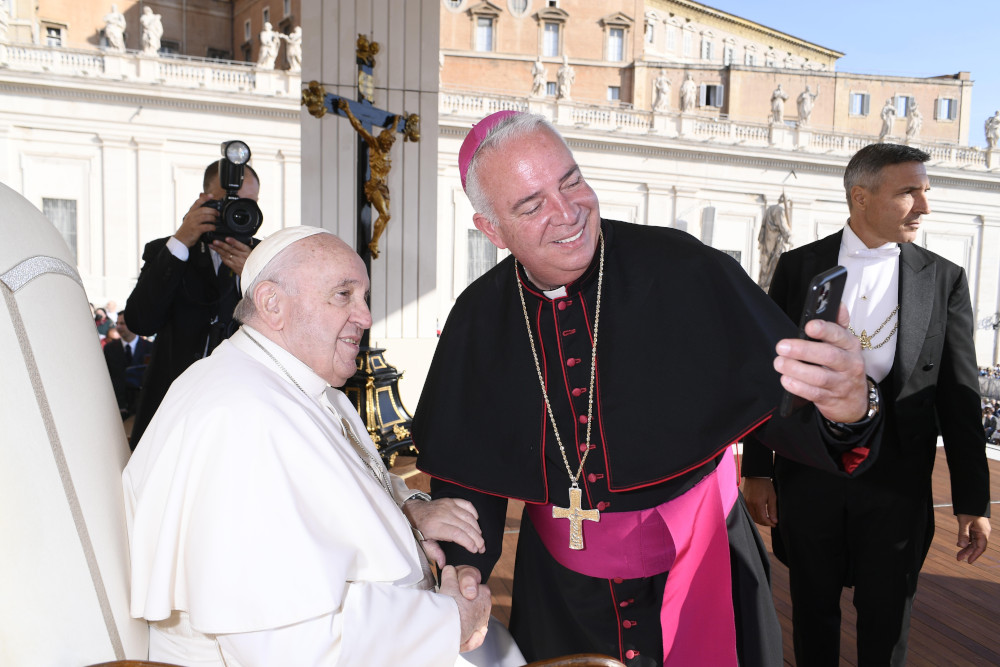 Young people in the United States are looking for a sense of community and a safe space in the church to express themselves freely, two representatives of Catholic youth told Pope Francis.

Olivia Marcoux, 16, of Providence, Rhode Island, and Destiny Morris, 16, of Lexington, Kentucky, gave Francis a quick snapshot of what young people want him to know during an encounter after his general audience in St. Peter's Square Oct. 12.

They were part of a delegation representing the National Youth Advisory Council, which is made up of 12 young people from different cultural backgrounds and parts of the United States. As a consultative body, the council is tasked with bringing the voices and gifts of young people into the work and ministry of the National Federation for Catholic Youth Ministry. Accompanying the group was Archbishop Nelson J. Pérez of Philadelphia, the federation's episcopal adviser.

Marcoux told Catholic News Service that they told the pope how young people "want community and they want a safe space in the church and that there are barriers in society which kind of hold us back from seeking out that community in the church."

Morris told CNS they already experience pressure from their peers who do not have a strong relationship with God "and might be judgmental of our own relationship."

On top of that, she said, they can feel "judgment from the older people in the church who have been there their whole lives and (are) not accepting of new ideas and relevant ideas." In addition, there is pressure from society and "worldly" values.

Marcoux said she told the pope about the huge amount of anxiety young people experience with the "pressure in school, pressure to perform well, and anxiety about expressing their faith and what they actually believe."

The Catholic faith has helped her and others she knows overcome that anxiety, she said.

"We have a really strong youth ministry at my church, and we really connected with our youth minister. She's been really important in helping us deal with that in recognizing our own personal struggles" in life and the faith, Marcoux said.

"We feel comfortable and safe in that safe space at church with our youth ministry," she said. "We feel safe enough to really express our own faith."

Marcoux said the pope told them to tell all young people in the United States that "we need to find more joy and that we always need to be looking for joy in our lives and in the church."

Another council member, Katey Nguyen, 17, from Fountain Valley, California, told CNS she was happy with her youth minister and the community they built, but he left for the seminary 10 months ago and there has been no replacement yet.

But, she said, she learned during her trip to Rome that young people need to "advocate for youth ministry to our bishops."

The meeting in Rome with young people from across the country was a wonderful experience of "community and togetherness I really crave," she said, especially with no youth ministry right now back home.

The members of the advisory council also met with Vatican officials to provide input on improving outreach.

Morris said they told Msgr. Lucio Adrian Ruiz, secretary of the Dicastery for Communication, that social media should be used the way it was meant to be: as a way to directly and personally speak to everyone. So, for example, "the pope should send videos to youth directly about social issues that we might have, having pictures and videos and speaking directly to us."

Council members Justin Fannon of Boston and Tania Vergara-Gongora of Lexington gave the pope a written message, a prayer card they created and a friendship bracelet, which Vergara-Gongora tied onto his wrist. It was a braid of white, green and blue strands to represent purity, unity and wisdom, Nguyen said.

The pope will be sending his own message to young people that will be shared at the National Catholic Youth Conference in November in Long Beach, California, and online.

Ryan Bao, the federation's staff liaison to the advisory council, told CNS that the council, which was launched this summer, "takes youth as protagonists ... to help advise us on our projects, our initiatives and everything that we are doing for youth ministers and people who accompany young people in the United States."

Morris said, "We, as youth, are not the future, we are very much the present and I think that's really showing in everything we are doing here right now and what the council really stands for."