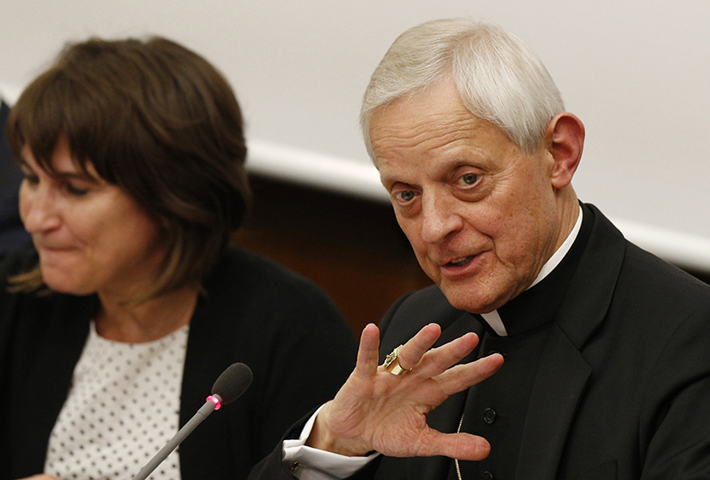 Cardinal Donald W. Wuerl of Washington speaks at a conference on climate change at the Pontifical University of the Holy Cross in Rome on May 20, 2015. (Paul Haring/Catholic News Service)

Washington Cardinal Donald Wuerl appeared to take a swipe at Georgetown University for inviting Planned Parenthood head Cecile Richards to speak, saying that "it is neither authentically Catholic nor within the Catholic tradition for a university to provide a special platform to those voices that promote or support" issues such as abortion.

Without mentioning the nation's oldest Catholic university by name, Wuerl wrote in a blog post on March 8 about the importance of Catholics' maintaining their Christian identity even amid the challenges of modernity or persecution.

That imperative, he said, "is no less important for the institutions of the Church such as universities and social ministries, as it is for individuals, to offer this testimony of their Catholic identity."

"Conversely, students, faculty, and the community at large are all impoverished, not enriched, when the institution's Catholic identity is diluted or called into question by seemingly approving of ideas that are contrary to moral truth," Wuerl wrote.

Richards' appearance, set for next month, was arranged by the Lecture Fund, a student-run organization at the Washington, D.C., university.

The event is not open to the public, and when news of Richards' invitation broke it was met by sharp criticism by some Catholics.

The Jesuit university responded with a statement saying it is committed to "the free exchange of ideas, even when those ideas may be difficult, controversial or objectionable to some." It noted that Richards is not being paid to speak.

"Georgetown remains firmly committed to the sanctity and human dignity of every life at every stage," it added.

Planned Parenthood, the nation's largest provider of abortion services, has for months been the target of abortion foes after the release of undercover videos that activists say show Planned Parenthood officials illegally negotiating to sell fetal tissue recovered from abortions.

While even some abortion-rights activists have cringed at the language used in the videos, Planned Parenthood officials have defended their procedures and the only charges that have been brought in any state have been against the undercover filmmakers.

Still, demands to defund the organization have become a major talking point in the presidential campaign, and for abortion foes.

The idea of giving Richards such a platform apparently was a step too far for Wuerl, who is not known as a culture warrior type.

"In our present culture, we have seen an increase in antagonism against Catholic teaching and the Church itself," Wuerl concluded.

"It is precisely in these times that the Catholic institution of higher learning is called to continual self-examination to ensure that it maintains and promotes an authentic Catholic identity, that it recognizes the importance of virtue, and that it attempts to be a beacon of Christ's truth and love as manifested in and through the Church."