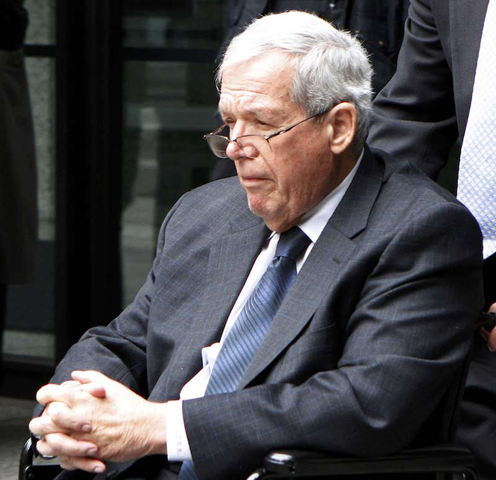 Former U.S. Speaker of the House Dennis Hastert leaves the Dirksen Federal Courthouse after his sentencing hearing in Chicago on April 27, 2016. (Reuters/Frank Polich)

Gay students, supporters and alumni at Wheaton College, a top evangelical Christian school that counts former House Speaker Dennis Hastert among its most famous grads, have told the administration they are "stunned" the college has not condemned the sexual abuse of boys that Hastert admitted committing when he was sentenced last week for fraud in trying to cover up the abuse.

In an open letter dated and released April 30, the group, OneWheaton, said "we are stunned that Wheaton College has not issued a stronger statement of condemnation and grief over damage done by someone whose image has been so strongly connected to Wheaton College."

The college had named a major center on economics and government after the Republican leader, who retired from Congress -- and his position as second-in-line to the presidency -- in 2007.

After reports first emerged a year ago that Hastert was under investigation for bank fraud (he had sought to hide $3.5 million in transfers to pay one of the boys he abused more than 30 years ago while a wrestling coach) Wheaton said in accepting Hastert's resignation from the advisory board of the center that it "respects Mr. Hastert's distinguished public service record."

When Hastert was formally charged a week later, and further details emerged about the allegations of abuse against several wrestlers, Wheaton said it was taking his name off the school's Center for Economics, Government, and Public Policy.

But the college also stressed that it "has not been implicated in or associated with any of the allegations in this matter" and added: "We commit ourselves to pray for all involved, including Speaker Hastert, his family, and those who may have been harmed by any inappropriate behavior."

The college did not say anything when three board members of the Wheaton center testified on Hastert's behalf at his sentencing hearing last month, telling a judge his record of public service and his contributions to Wheaton were factors that should work in the former speaker's favor.

And Wheaton has not issued any official statement since Hastert, 74, was sentenced to 15 months in federal prison on April 27. At the sentencing, Federal Judge Thomas Durkin called Hastert a "serial child molester" and ignored a prosecutor's recommendation that he receive a six-month prison term.

Hastert also apologized "to the boys I mistreated."

In their letter, the members of OneWheaton "profoundly and unequivocally" condemned Hastert's abuse and praised "the strength and courage it took for Hastert's victims to speak out against Hastert."

They said they were "appalled that representative members of the Wheaton College community would write in support of Hastert rather than standing in solidarity with his victims."

But above all they said the school needed to speak out.

"When powerful Christian institutions, like Wheaton College, fail to denounce the abusive behavior of their community leaders and instead praise, protect or excuse the abuser, they are complicit in that abuse and the profound suffering and irreparable damage incurred," the letter writers say.

"When the abuser is a Christian or represents key Christian institutions, this damage is not only psychological but spiritual."

Wheaton did not respond to requests for a comment.

It's not clear how many among the approximately 3,000 students at the liberal arts college west of Chicago are supporters of OneWheaton.

Wheaton has been the focus of another controversy in recent months following the administration's decision to fire a tenured professor, Larycia Hawkins, who expressed the view that Muslims and Christians worship "the same God."

Despite an outcry and support from many students and faculty, the administration did not relent and Hawkins announced in February that she was leaving Wheaton.

She has since joined the Institute for Advanced Studies in Culture at the University of Virginia.