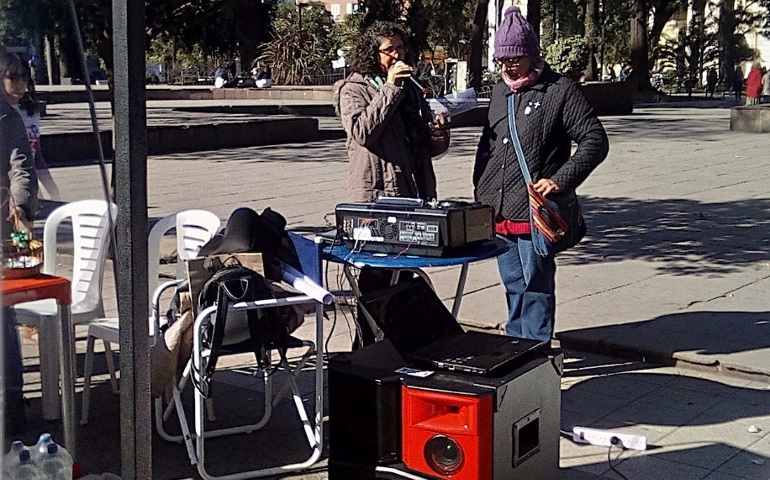 The panelists for October all answered with a resounding "yes" in their responses to this month's question. But they had a variety of approaches and diversity of actions.

Cecilia Oluchi Dimaku is in the Congregation of the Sisters of the Sacred Heart of Jesus, an indigenous institute in Nigeria. She previously held business positions in schools, the diocese and her community. After 12 years in leadership, she was missioned to the Sisters of the Holy Family in the United States, where she works as payroll and personnel coordinator at their academy in New Orleans.

As consecrated women, we are voice for the voiceless. Having an option for the poor and oppressed requires that we speak out against policies and structures that contribute to people's suffering, what Pope John Paul II called the "structures of sin."

While sisters participate in missions of charity, they must work to change unjust systems and structures and find ways to monitor and influence government entities that serve the people locally and nationally.

Corruption is primary among the many evils facing our country, Nigeria. Corruption has the attendant consequences of high unemployment, especially among young people. This in turn has given rise to the menace of trafficking in human persons, the rise of Boko Haram sects, the Fulani Herdsmen, and other evils Nigeria is experiencing today.

Nigerian sisters are actively involved in finding political, religious and social solutions to these problems. They represent the plight of the people, especially that of women, to local, state and national political leaders. Some Nigerian sisters are members of government committees set up to deal with religious crises in the country and to find ways to peacefully co-exist between Christians and Muslims.

Last year, sisters in Nigeria took the case of persistent violence and insecurity in Nigeria, especially as it affects women and children, to the Nigerian National Assembly. During elections, sisters conduct town hall meetings to enlighten and educate the electorate, most of whom are uneducated, on voters' rights and obligations.

Active involvement in politics does not have to mean running for or holding a political office. Sisters quietly make a difference in their local communities, mobilizing political awareness through grassroots involvement.

One of our sisters told me how she got the local power company to restore electricity to a village that had been without light for over six months just by organizing other sisters for a sit-in protest at the electricity board office to insist that light be restored to the village.

Active politics means being aware of our global and local realities, educating ourselves about political issues, and paying attention to genuine news about our country and elected officials and how they are keeping or not keeping their promises.

I call or write my representative about issues affecting my local community or my country. I am a member of groups that call the attention of government to issues about trafficking in human persons and care of our environment. This is my way of being an active participant in politics.