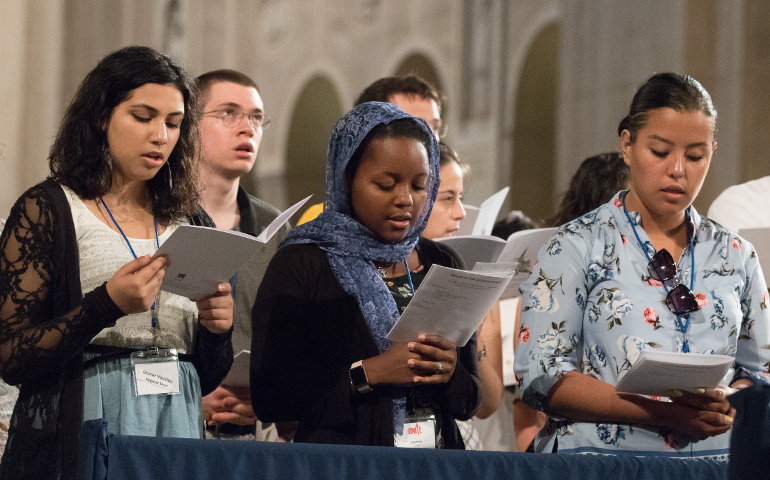 Young people pray at the Basilica of the National Shrine of the Immaculate Conception in Washington July 22. (CNS/courtesy Daphne Stubbolo, Archdiocese of Washington)

More than 1,300 young adults from across the country gathered at the St. John Paul II National Shrine in Washington July 22 for World Youth Day Unite, an event designed to bring together young people to celebrate their faith in years when the global World Youth Day does not take place.

Jose Rodriguez, who traveled to the event with a group from the Diocese of Camden, New Jersey, said he felt it was important to go to an event where he could be surrounded by other young adults and see "it is OK to say you're Catholic and OK to be proud to be Catholic."

Vicente Garcia, a recent college graduate from the Archdiocese of Baltimore, traveled to World Youth Day in Krakow, Poland, last year and was excited to attend World Youth Day Unite as a reunion.

During World Youth Day, Garcia said he got to experience "the beauty of the church and the universality of it" through being united with people of different cultures, and "people I don't even know, yet we're united in Christ." He hoped the daylong event would be a continuation of that experience.

The event's theme was: "The Mighty One has done great things for me and holy is his name."

Bishop Nelson Perez, soon to be installed as the bishop of Cleveland, and Bishop Frank Caggiano of Bridgeport, Connecticut, gave keynote addresses about these words.

The common reason why everyone was there, he added, was because "somewhere back in the day or recently, you and I had an encounter with Jesus Christ," which is the center of the Christian faith.

While the Christian faith also includes being kind, generous, caring and compassionate, he noted that people who aren't Christian can also do these things, and sometimes do them better. Rather, what distinguishes Christians, Bishop Perez said, is the belief that "(Jesus) moved, He rose from the dead, and He continues to move in us and through us and about us."

As an example of this, Perez recalled a conversation he had that he felt went very poorly, but three years later found out it was the closest the other person had ever felt to God.

"Never, never, never underestimate the power of God's Spirit working in you and through you and despite you ... most of the time unbeknownst to you and me," he said.

Perez also spoke about God's goodness and mercy, and how his love requires a response of trust and gratitude, like that of Mary. Her trust, Perez noted, was not because she had no worry or doubt. Rather, when the angel Gabriel came to tell her she would give birth to Jesus, she was filled with fear and doubt, he said.

Following his address, Mercy Sr. Gilmary Kay, who is the Archdiocese of Washington's delegate for consecrated life, and Julia and Francis Dezelski, a young married couple, joined Perez on the stage for a panel in which they shared great things they said God has done in their lives.

Afterward, the pilgrims braved an impending thunderstorm to walk to the Basilica of the National Shrine of the Immaculate Conception for a prayer during the hour of Mercy, led by the Sisters of Our Lady of Mercy, and for Mass, celebrated by Cardinal Donald Wuerl of Washington. He was joined by Perez, Caggiano, Bishop Edward Malesic of Greensburg, Pennsylvania, and Auxiliary Bishop Mark Brennan of Baltimore.

In his homily, Wuerl told the young adults that they were called to be the "good seed" planted in the world.

"You are to be that leaven in the world; that mustard seed that can grow and bloom into so much more," he said.

The purpose of the World Youth Day Unite gathering, he added, was to "focus on the specific witness that World Youth Day brings to the world" and to invite their generation "into the ongoing mission of the church."

In the Gospel, Wuerl noted, the good seed finds itself surrounded by "many weeds that don't find inspiration from the Gospel," which he likened to modern day secularism and individualism, which says faith is something that needs to be kept to yourself. The real threat of such secularism, he said, is "that we begin to believe it is true."

Instead, "all of us are called to offer explicit witness to the saving love of the Lord who desires, despite our imperfections, that we simply be close to Him," the cardinal said, adding that the power to do so comes from anointing in the Holy Spirit at Baptism.

After Mass, the young adults gathered for a pilgrimage unity walk, led by Brennan, under the patronage of Mary, Undoer of Knots. The pilgrims each received a ribbon on which they could write a burden of theirs and tie it around their wrists for the walk. When they arrived at the St. John Paul II National Shrine, they were asked to untie them and place them in a basket. Then, they enjoyed dinner and a concert by Tony Melendez.

In the evening, Caggiano gave his keynote address and led the young adults in adoration of the Blessed Sacrament, accompanied by the music of Audrey Assad.

He encouraged everyone to reflect on the phrase "God is love," saying, "Life will give you a thousand reasons to doubt God's love," but in order to be missionary disciples, they must "say yes to the fact that Jesus is extending his hand to us in friendship."

Following this, he posed a question to the young adults: "Are you and I ready to dare to believe that what you are looking at in the mirror is worth everything to Jesus?"

After reflecting on the ways they have experienced God's love, Caggiano said the next step is to "go out into the world and let other people know they are also loved."