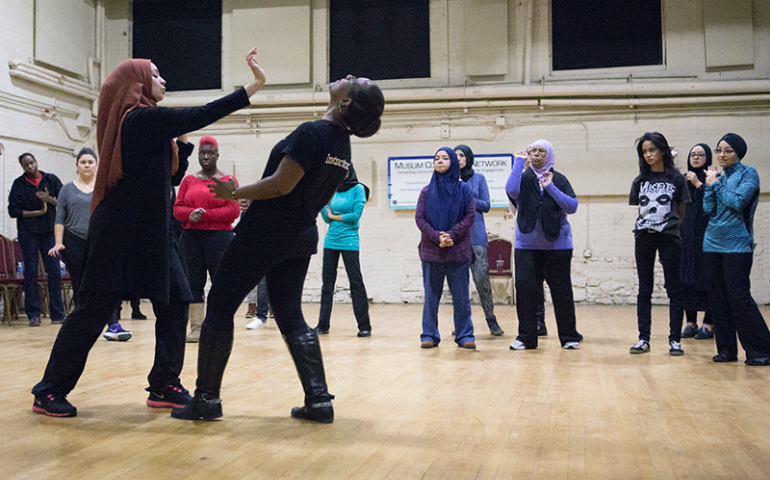 Women participate in a self-defense class at the Muslim Community Network in New York City on Dec. 3, 2016. (Sai Mokhtari/Gothamist)

Melissa Grajek was subjected to all kinds of taunts for wearing the hijab, but an incident at San Marcos’ (Calif.) Discovery Lake sealed the deal.

Her 1-year-old son was playing with another boy when an irate father saw her and whisked his son away, telling Grajek: “I can’t wait until Trump is president because he’ll send you back to where you came from.”

The man then scooped up a handful of wood chips and threw them at Grajek’s son.

At that moment, Grajek thought, enough was enough. She decided to take off her head covering.

“I had been on the fence regarding hijab, but that incident made it clear my religious choices could be putting my son at risk,” she said.

Grajek’s decision to doff the hijab follows weekly, if not daily, news reports of assaults against Muslim women.

Last week on Dec. 6, Ilhan Omar, the newly elected Minneapolis state representative was leaving the White House, which she visited to talk about policy initiatives, when a cabbie threatened to yank her hijab while shouting expletives and calling her "ISIS."

A day earlier, a man pushed a New York City transit worker down a staircase at Grand Central Terminal in Manhattan, yelling, “You’re a terrorist, go back to your own country!”

And two weeks ago in Brooklyn, another man threatened an off-duty police officer with his pit bull, telling her and her son to “go back to your country.”

All three women were wearing hijabs.

Assaults or intimidation of Muslims had been steadily rising well before the election but they became more common during the divisive campaign of President-elect Donald Trump, who called for a ban on Muslim immigrants and proposed a registry for U.S. Muslims.

Now some imams across the country are saying it’s OK to take the hijab off, at least temporarily.

Imam Abdullah Antepli recently asked a group of women at the Islamic Association of Raleigh (N.C.) how many of them felt unsafe in public.

Dozens of hands shot up.

He then told them the extraordinary circumstances under which Muslim Americans now live may require extraordinary measures — including doffing the hijab, at least for a while.

“I’m not trying to be alarmist,” said Antepli, the chief representative of Muslim affairs at Duke University. “But the nation is being sucked into a combustible mix. We have to think unconventionally.”

Antepli’s call to remove the hijab, which he repeated at a mosque in Cary and in home gatherings of Muslims in Raleigh and Chapel Hill, is rare but not unheard of.

In Texas, Imam Omar Suleiman, president of the Yaqeen Institute for Islamic Research and resident scholar at the Valley Ranch Islamic Center in Irving, said women’s fears should be taken seriously.

“It’s important to give our women support and validate the fear they’re feeling,” said Suleiman, who is also a professor of Islamic Studies at Southern Methodist University. “Fear isn’t quantifiable; it’s to the person’s own experience.”

While Suleiman doesn’t foresee a blanket call to abandon the headscarf, he advises women to consider practical measures, such as wearing a hoodie instead of a hijab if they feel like they may be in danger.

For many Muslim women, the head covering is a quintessential mark of their identity — much as the kippah or yarmulke is a customary requirement for Orthodox and some Conservative Jewish men.

While often understood as a symbol of modesty and privacy, the hijab is much more for those Muslim women who choose to wear it. They view it alternately as a sign of religious devotion, discipline, freedom from Western expectations, or simply a way to be in a continuous state of prayer.

Many Muslim women would never think of giving it up, even if it means being targeted.

“This is a difficult time,” acknowledged Khalilah Sabra, a Raleigh Muslim activist who works for the Muslim American Society’s Immigrant Justice Center. Just last month, a man spit in her face as she descended the stairs of the Garfield, N.J., Municipal Court, where she was testifying in a domestic violence dispute.

Sabra decided to buck up and carry on.

“We have to stand up for our religious rights and encourage women to stand their ground,” she said.

Others, however, are taking security measures.

On Nov. 9, when New York’s Muslim Community Network posted a notice on Facebook about a self-defense workshop, leaders expected 50 or 60 women would respond. Within hours, 2,700 women had signed up.

The third such workshop at Judson Memorial Church in the Greenwich Village neighborhood took place Dec. 10.

On Wednesday, the Council on American-Islamic Relations will sponsor a free self-defense workshop at Aqabah Karate studio in College Park, Md.

“A lot of people have been traumatized,” said Debbie Almontaser, the Muslim Community Network’s board president. “We want them to come in and feel empowered once they’ve finished the training.”

The workshop’s instructor is a woman, and the instruction is preceded by a group talk where women can share their fears and get advice on how to respond.

And quietly, some Muslim women are uncovering their hair.

“One of the reasons women are encouraged to dress modestly is for their protection,” said Engy Abdelkader, senior fellow and adjunct professor at Georgetown University’s Walsh School of Foreign Service. “Once that purpose is no longer served there’s an argument that it becomes a matter of necessity to remove it or make it less conspicuous with a hat, for instance, in order to preserve her safety.”

While Abdelkader still wears her hijab, Rose Ashraf has taken it off.

For Ashraf, there was no traumatizing incident. An operations director for a food service management company, Ashraf, who lives in Houston, said her bosses were very supportive of her hijab.

But her work requires frequent travel and being a single veiled woman at airports, hotels and restaurants forced her to constantly look over her shoulder.

“By wearing the hijab, I felt like I was a target,” said Ashraf, who converted to Islam shortly before she married a Muslim in 1973. “I was always on guard for what might happen: Is someone going to react negatively? Can I trust this person?”

Three months ago, she took off the headscarf. She feels safer, now, she said, but wishes she could also practice her faith more freely.