Alternative facts and fear-mongering, we've seen this before 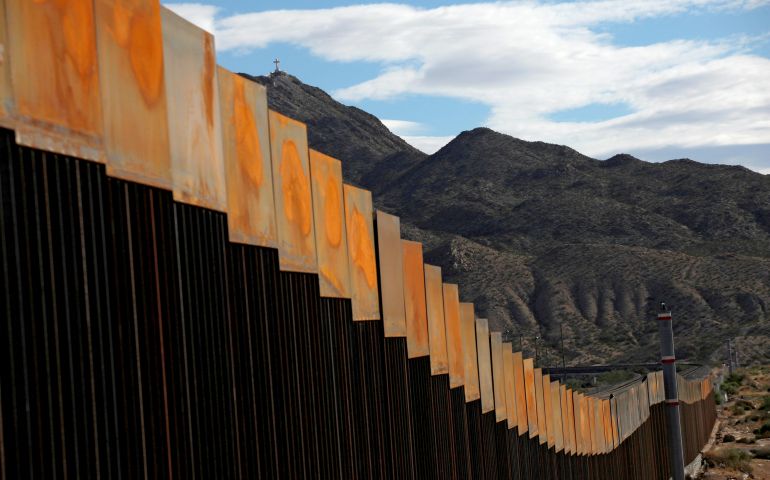 [T]he Invergordon Mutiny, the Bonus March on Washington, the Nazi book-burning, the Night of the Long Knives, the Concorde riot, the conquest of Ethiopia, the Tokyo military revolt, the bombing of Guernica, the rape of Nanking, the Anschluss, the great Soviet purges. Such episodes are included for their intrinsic importance. But they also enable me to develop the main theme of the book, which concerns the manipulation of perception and the distortion of reality. Propaganda became part of the air people breathed during the 1930s. All the major occurrences of the day were subject to organized deception which ranged from the big, amplified lie to a delicate economy with the truth.

—Piers Brendon, Introduction, The Dark Valley: A Panorama of the 1930s

President Donald Trump's raft of executive orders on immigration are, in one sense, mere pledges of things he intends to do, an extension of his campaign pledges now given the force, if not of law, at least of executive-branch intent. In another sense, however, they are the most sinister executive orders in modern history, containing the seeds a would-be authoritarian would want to plant in his political garden.

The United States of America does not face an immigration crisis. Between 2009 and 2014 there was a net decline in the number of migrants coming from Mexico into the U.S. of 140,000 people, according to a Pew study published November 2015.

There is no drastic epidemic of violent crime perpetrated by undocumented immigrants: As Alan Gomez at USA Today explained, Trump and his anti-immigrant allies cite skewed data to make their case. They rightly assert that a disproportionate number of those in federal prisons for violent crimes are undocumented immigrants. But, there is a reason for that. "Only a tiny percentage of the nation's violent crimes are handled by the federal court system," Gomez noted. "Yes, undocumented immigrants accounted for 9.2% of federal murder convictions in 2013, but that represents a grand total of eight murder cases. When you consider that the FBI estimates there were 14,196 murders in the U.S. in 2013, those few cases handled by the federal court system don't quite register as a reliable sample set."

Nor are cities on the border experiencing violent crime sprees of the kind that would warrant adding 15,000 more federal immigration enforcement personnel, as Trump has pledged to do. According to the rankings by Congressional Quarterly, Brownsville, Texas, is the 97th safest city in America out of 400 surveyed. El Paso, Texas, is the 126th safest city, and Chula Vista, California, is the 155th safest city. All are on the border, and all fall below the national mean of violent crime. Oakland, Calif., which is far from the border, is the most dangerous city in that state, and St. Louis, Mo., is the nation's most dangerous city. It borders Illinois.

None of this mattered to our new president. When he spoke to the issue of immigration at the Homeland Security Department, he painted a picture of jobs being stolen, of violent crime being perpetrated, of a porous border with millions of immigrants coming across. He recognized the family members of those killed by an undocumented immigrant. He promised to build the wall and make Mexico pay for it. He pledged to stop federal funding to sanctuary cities.

I suppose we should not be surprised by the president's rantings. What is surprising, and very frightening, is the lack of pushback from Republicans, who, just a few months ago, were still supporting comprehensive immigration reform. The United States Conference of Catholic Bishops issued a statement that was relatively weak. It did not reflect the acute sense of fear in our Catholic communities. It lacked the verve and pungency of the conference's statements on religious liberty. The conference should adopt the stance of this tweet from Newark's Cardinal Joe Tobin:

A fearful nation talks about building walls and is vulnerable to con men. We must challenge the fear before we are led into darkness.

The Washington Post story on the executive order's pledged actions against sanctuary cities correctly led with a quote from Mayor Betsy Hodges of Minneapolis, which correctly identified what is going on here: "Cities know how important local control is, because we are in touch with the people we represent most closely. This is a president who's been clear that he wants to centralize as much authority as he can in himself," Hodges said. "That is dangerous for our democracy, I believe, and he is using the levers of our democracy to centralize his authority."

"Federal appropriations for border security have grown to $3.8 billion in FY2015, from $263 million in FY1990, and fencing exists for hundreds of miles along our southern-border," said Sr. Simone Campbell of NETWORK, a lobby organization for Catholic social justice. "Be aware: any fear-mongering done by Trump administration officials is based on 'alternative facts' and simply not the reality of our nation."

"Centralizing authority." "Fear-mongering." "Defining 'the other.' " We have seen this before.

I set aside the fact that many undocumented immigrants from Central America come here because they are fleeing the violence in their countries, violence that was made possible in large part because the United States funded military and paramilitary operations in their countries in the 1980s and then visited them with the dislocation and disruption of trade pacts in the 1990s. Those refugees coming from the Middle East are fleeing violence that has been made much worse by the U.S. invasion of Iraq and all that followed from that. In justice, we owe these immigrants and refugees a welcome and a helping hand.

Let's focus on what is going on here. A problem that is not a problem, complete with highly dramatized victims and villains, is raised with the specific intent of getting people's blood boiling. Simple solutions are proposed for complex problems, mindful that when those solutions do not work, and they will not work, the leader can ask for more power to address the still dangerous situation. I am desperately worried about what effect these executive orders, if implemented, will have on our immigrant brothers and sisters. But I am also worried about something even more sinister: Fascism is not a doctrine of governance.

"Mussolini changed his policies as he changed his mistresses," writes Brendon. "Fascism was form rather than content, style rather than substance. It was, as Mussolini said, 'a doctrine of action.' " And it worked, in part, because it "denies concepts of the absolute and affirms the vital necessity of the continuous creation of illusion, of relative realities."

"Centralizing authority." "Fear-mongering." "Defining 'the other.' " We have seen this before.

Justice | Alternative facts and fear-mongering, we've seen this before