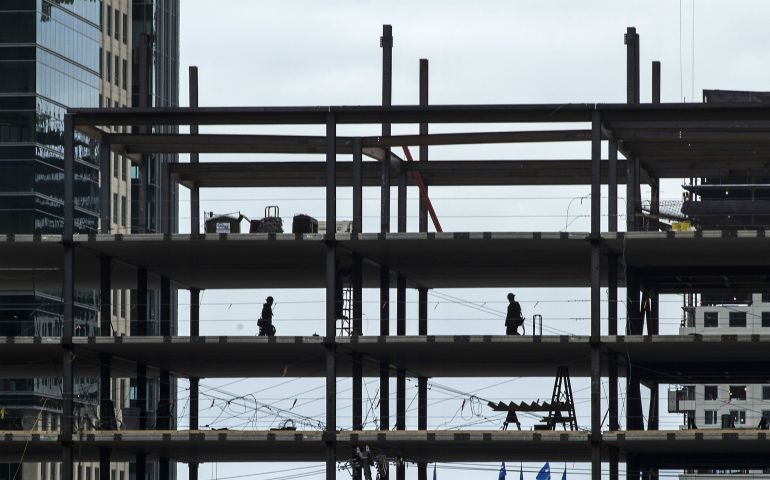 Last week, Pope Francis spoke to a delegation from the Confederation of Trade Unions, Italy's equivalent of the -CIO in this country. It was a short but remarkable speech that mostly got lost because the pope had a general audience an hour later and a consistory to create new cardinals in the afternoon.

He sketched for the group two aspects of trade unionism that he thought were especially necessary at this point in history. First, he called the union movement to perform a prophetic role, which it does when "it gives a voice to those who have none, denounces those who would "sell the needy for a pair of sandals" (cf. Amos 2:6), "unmasks the powerful who trample the rights of the most vulnerable workers, defends the cause of the foreigner, the least, the discarded." He noted that the proudest moments in the history of the Italian trade union movement came when it performed this function.

In the United States today, who has been the stalwart ally of the Catholic Church is speaking up for the rights of immigrants? Organized labor. It was not always so. There was a time when organized labor saw immigrants as driving down wages, but under the leadership of President Richard Trumka and the reality of facts, the labor movement came to recognize that the problem was not the immigrants but the exploitation of immigrants that drove down wages. For the past 10 years or so, labor has stood arm-in-arm with the Catholic Church defending immigrants. The -CIO, through its solidarity centers, also fights the exploitation of workers in those countries that create the supply of immigrants, working to create conditions that allow people the right to stay in their country and earn a decent living.

Who is standing with the Catholic Church in opposition to these draconian and Dickensian overhauls of the nation's health care system? Organized labor. It is they who began running ads in key states, urging Republican senators to oppose the most recent iteration of reform, which would kick more than 20 million people off the insurance rolls. There are four member unions of the -CIO that represent nurses, so they know from where they speak on this issue.

The second task the Holy Father gave the labor move was innovation. "Prophets are sentinels, who watch from their lookout, the pope said. "The union too must keep vigil over the walls of the city of work, like a watchman who guards and protects those who are inside the city of labor, but also guarding and protecting those who are outside the walls. The union does not carry out its essential function of social innovation if it watches over only those who are inside, if it protects the rights only of those who already work or who are retired. This must be done, but it is half of your work. Your vocation is also to protect those who do not yet have rights, those excluded from work who are also excluded from rights and democracy." (emphasis in original)

For years, it has been organized labor that has pushed for full employment programs, advocated for better schools and training programs, and, as noted above, stood by immigrants in danger of being exploited by unscrupulous employers and inhumane economic and political "laws."

Although the pope doubtlessly had such situations in mind, he made it clear that he also wanted labor to confront what is always the 600-pound gorilla in Western society and culture: Capitalism. "The capitalism of our time does not understand the value of the trade union, because it has forgotten the social nature of the economy, of the business," the Holy Father said. "This is one of the greatest sins. Market economy: no. Let us say, social market economy, as St. John Paul II taught: social market economy. The economy has forgotten the social nature that it has as a vocation, the social nature of business, of life, of bonds and pacts."

I have written before, as have many others, about the transformation in modern capitalism from one that valued all stakeholders to our current capitalism, which only values shareholders. There was a time when a CEO would negotiate in good faith with the union over wages because there was a stigma attached to union-busting: People did not want to be associated with the tactics of Henry Frick. Ronald Reagan broke the ice when he crushed the air traffic controllers' strike, and Wall Street titans were only too happy to second the motion, seeing greater profits in lower wages for workers.

Pope Francis, like the prophets of old, is not a revolutionary. He is calling us back to the best of our history, to a time when workers were respected, not always but mostly, when there was not so much economic inequality, when there was a sense of responsibility not only to a company's workers but to the community that hosted the company. Today, companies pit different jurisdictions against each other in a bidding war to avoid paying taxes. Is that the face of solidarity?

I read the pope's words. I saw that the -CIO tweeted out the link and am told it brought tears to the eyes of some pretty hardened, non-Catholic union folk. I asked myself: I can see why a Catholic Democrat would be reluctant to quote the pope, but why are not non-Catholic Democrats quoting him?

We read article after article in which the Democrats admit they have a messaging problem. Well? Here is the answer to that: Talk like the pope, quote the pope, challenge our culture as he does, call the nation back to its finest moments, not its darkest ones, mindful of the challenges but know that deep down in the American psyche there is a secret that helps us liberals: Americans like to root for the little guy. If the Democrats remember the little guy, instead of following the lead of Wall Street, they can take back the House of Representatives, the Senate and the White House.