More thoughts on the resistance to Trump 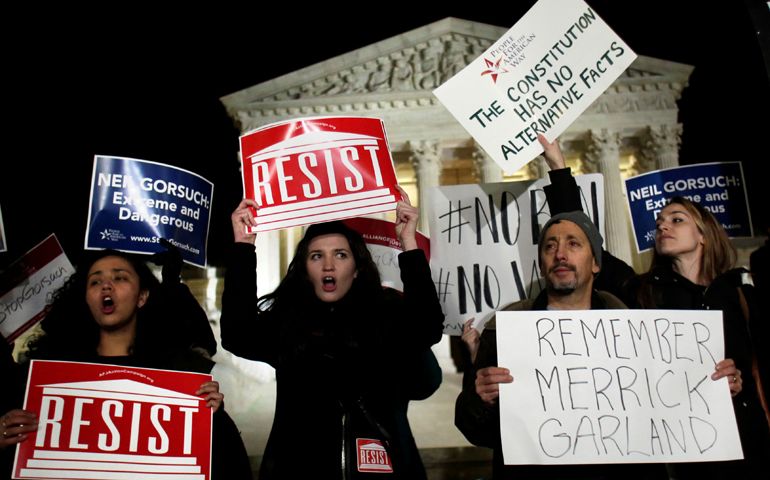 Last week, I wrote about the contours of the opposition to President Donald Trump. The article provoked several conversations with friends more learned than myself, and then, as if by magic, I came across some important articles that sounded a similar theme.

The first such article was Carlos Lozada's review in The Washington Post's Outlook section of two new books on the opposition to Trump. Lozada, who is one of the Post's finest writers, argued that there are two battles in which the opposition must engage. The first "is against the new administration's policies and choices" which is already beginning in the protests and court challenges we have seen. The second "is the fight over the cultural and economic forces that propelled Trump to the presidency in the first place." Lozada notes that the putative leaders of the opposition are still only focused on the first battle and that their recipe is not well suited for winning the second.

"[D]onate to liberal causes" and "complain about Trump on social media" and "read books by Ta-Nehisi Coates, Rachel Maddow, Naomi Klein, Glenn Greenwald, Arlie Russell Hochschild and Robert Reich" are what is being recommended by these leaders of the left, "everything that conscientious upper-middle-class Democrats were already doing."

Lozada is scathing in his critique: "Perhaps this is the way to 'survive' the Trump era — resist the red-state philistines by closing your life and mind off from them, and repeat 'this is not normal' again and again. But such admonitions will not help you understand why tens of millions of your fellow citizens would see the world any differently than you do or have priorities other than your own. It is possible to worry so much about Trump's America that you forget about Trump's Americans."

I commend a careful reading of his entire essay.

One correspondent picked up on my concern that Democrats cannot merely be obstructionists in the manner that Republicans can because the latter want government to appear dysfunctional so they can advance the case for cutting back. My friend said, "obstruction is not a good color for the Democrats," a splendid line I wish I had crafted, and suggested that we distinguish between obstruction and resistance. Obstruction is when you prevent the normal operations of our democracy for purely political ends. Think Merrick Garland. Resistance is when you seek to defend democracy from an existential threat. This framing requires us to distinguish between obstruction and resistance each and every time, and the only way to do that effectively is to address the merits of the issue at hand. I do not think anyone could argue that Mr. Garland having been given a hearing was an existential threat to democracy. I think many people understand that having senior advisers to the president traffic in "alternative facts" is such a threat. It would be nice if, six months hence, this distinction between obstruction and resistance had entered the general lexicon.

One potentially hopeful sign is the formation of a  "blue collar caucus" in Congress. Politico has a webchat with the two founders, Rep. Marc Veasey of Texas and Rep. Brendan Boyle of Pennsylvania. In an article about the new caucus at DailyKos, the author finishes with a bunch of tweets from the aforementioned Ta-Nehisi Coates that make me worry. The claim that all oppression is economic sounds a bit too materialistic and Marxist for my tastes and, what is more, I think Democrats would be well served to use the word "oppression" more sparingly. We have huge problems in this country to be sure, and African-Americans, for example, surely have a special claim on the commonwealth for both historic and contemporary experiences of racism. But, oppression suggests a determined intent that is not the hurdle today so much as residual racist attitudes. Save the word oppression for when we might need it, which might be sooner than we think if Mr. Bannon continues to whisper into the president's ear.

The remedy for Democrats who want to win both struggles defined by Lozada is to steal a page from Pope Francis, actually two pages. They should read, memorize, and recite some of his scorching words about modern capitalism, delivered most recently in a speech on Saturday. "[W]e must work toward changing the rules of the game of the socio-economic system. Imitating the Good Samaritan of the Gospel is not enough," the Holy Father told members of the Focolare movement, and he did not have in mind the kind of changes Trump is making. "Of course, when an entrepreneur or any person happens upon a victim, he or she is called to take care of the victim and, perhaps like the Good Samaritan, also to enlist the fraternal action of the market (the innkeeper). I know that you have sought to do so for 25 years. But it is important to act above all before the man comes across the robbers, by battling the frameworks of sin that produce robbers and victims. An entrepreneur who is only a Good Samaritan does half of his duty: he takes care of today's victims, but does not curtail those of tomorrow." Can you imagine if our progressive politicians spoke in such bold terms???!! Politicians on the left may not be able to go as far as Pope Francis, but they must articulate a moral foundation for an economy that works for working class people.

The second thing to borrow from the pope is his method, namely, encounter and accompaniment. If the resistance to Donald Trump is going to succeed not only in stopping this policy or that executive order, but succeed in bridging some of the divisions Trump so effectively sows, then we must reach out beyond the like-minded, beyond the comfort zones, beyond MSNBC commentators. Van Jones' recent conversations on CNN provide a model. Everyone should seek out and read, with an open mind, articles by people with whom they disagree. Politicians should go out and conduct real town halls, where people really get to speak their minds, not where the loudest and most organized protests necessarily dominate.

We needed more than a politics of "no" during the Obama years: The inability of the GOP to come up with more left them vulnerable to the hostile takeover that occurred to them. The Democrats should not make the same mistake. People who voted for Obama twice and Trump last year are not racists. They are not fools. They hold good values. They voted for change last November and I am betting some of them are already or soon will be regretting the change they are getting. The Democrats can ignore them or they can send them a lifeboat. I vote for the lifeboat.

More thoughts on the resistance to Trump

Pro-life movement must build a wider, bigger culture of life