Pope Francis' fourth anniversary: a church rooted in love for the poor 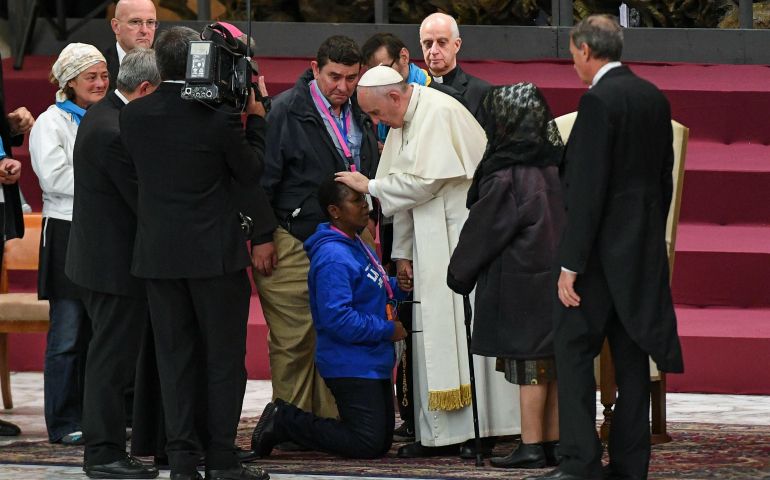 Pope Francis blesses a pilgrim during a special audience with homeless people in Paul VI hall at the Vatican, Nov.11, 2016. (CNS photo/Alessandro Di Meo, EPA)
This article appears in the Four Years of Francis feature series. View the full series.

Yesterday, I began looking at key themes of Pope Francis' papacy as we prepare for the celebration of the fourth anniversary of his election as Bishop of Rome next Monday. Today, I focus on his teaching about and ministry to the poor.

Just as the commandment "Thou shalt not kill" sets a clear limit in order to safeguard the value of human life, today we also have to say "thou shalt not" to an economy of exclusion and inequality. Such an economy kills. How can it be that it is not a news item when an elderly homeless person dies of exposure, but it is news when the stock market loses two points? This is a case of exclusion. Can we continue to stand by when food is thrown away while people are starving? This is a case of inequality. Today everything comes under the laws of competition and the survival of the fittest, where the powerful feed upon the powerless. As a consequence, masses of people find themselves excluded and marginalized: without work, without possibilities, without any means of escape.

The pope's willingness to say that "this economy kills" is emblematic of the trenchant terminology with which he confronts current economic structures in moral and human terms. This has been a hallmark of his pontificate, but it goes deeper than most have realized.

The contentions over the Holy Father's teaching on social issues differ from those surrounding the discussion of ministering to the divorced and remarried. What Francis has to say about the economy is fully in line with what Pope John Paul II and Pope Benedict said about social justice. Francis simply says it in more forceful and accessible ways. And he grounds what he has to say in explicitly biblical language.

Last December, I ran a three-part series that looked at the opposition to the Holy Father. You can find those columns here, here, and here. In the first of those essays, I focused on the ways American neo-conservatives diminished, and even misrepresented, those teachings of these recent popes that challenged the dominant economic system and the arguments made to justify it. Pope Francis' critique is so easily understood, framed in such familiar language, that such diminishment and misrepresentation are impossible.

At the time of his election, it was not apparent that the neo-liberal economic and political order was collapsing, and collapsing quickly. Pope Francis and Catholic social doctrine are offering the only coherent alternative to the economic nationalism cum cultural chauvinism being peddled by President Donald Trump, Marine Le Pen (the leader of France's National Front) and others. But the pope's vision will be resisted by the powerful economic forces that his vision challenges, forces that are regrettably willing to try and do business with Trump. This fact tells you all you need to know about the claims of the pro-market crowd that current economic structures can be made moral.

There is another, different and specifically ecclesial dimension to the Holy Father's focus on the church's social doctrine, however, that is usually overlooked. For too long, "Catholic identity" has been about assenting to a series of particular positions, mostly on matters related to sex and gender, by those advocating for a full-throttled, muscular Catholicism. Those with quibbles or questions about these particular teachings are deemed adherents of a "Catholic lite" approach to the faith. From George Wiegel's book Evangelical Catholicism, which somehow thought that making English the working language of the Roman curia was a Gospel-derived reform, to Mary Eberstadt's It's Dangerous to Believe, which catalogued a variety of upper middle class worries (will the children of believers be able to fit in, or even attend, the best colleges?), the Catholic right seemed to forget that the Gospel is good news to the poor, at least as Jesus announced it at the synagogue in Luke 4. Pope Francis poses the question to the church today: Is the Gospel, as we proclaim it, still good news to the poor?

Pope John Paul II frequently called for a "new evangelization." There has long been discussion about what precisely this entailed, some focusing on new ways of proposing the Gospel, others on shoring up a sense of Catholic identity to better evangelize, and some, those closest to the desires of the Second Vatican Council, arguing that the new evangelization must begin with the Gospels, where concern for the poor is paramount and issues like contraception and religious liberty are several derivative steps away from the core.

Pope Francis gave a perfect illustration of a proper hierarchy of values when he was asked about condom use to prevent HIV/AIDS at the press conference on the flight back from Africa. He said:

It strikes me that the question is too narrow, even one-sided. Yes, this is one method. The Church's moral teaching is — I think — uncertain about whether it has to do with the fifth or the sixth commandment: protect life or keep sexual relations open to life? But that is not the problem. The problem is bigger than that. The question makes me think of what they once asked Jesus: "Tell us, Master, is it permissible to heal on the Sabbath?" It is a duty to heal! This question… is it permissible? But malnutrition, exploitation, slave labor, the lack of drinking water: these are the problems. Let's not worry about using this or that bandage for a small wound. The big wound is social injustice, environmental injustice, the injustice I mentioned with exploitation and malnutrition. This is injustice. I don't like to descend to this kind of casuistry while people are dying from lack of water, food or housing. … When everyone is healed and when these tragic maladies provoked by man no longer exist, whether as a result of social injustice or greed — think of the arms trade! — when these problems no longer exist, then I think we can ask a question like: "Is it permissible to heal on the Sabbath?" Why do we continue to manufacture and sell arms? Wars are the cause of an even greater number of deaths. … I would say not to think about whether it is permissible or not to heal on the Sabbath. I would say to mankind: work for justice, and when everyone is healed, when there is no injustice in the world, then we can speak about the Sabbath.

Not for the first or last time, Pope Francis invoked a biblical parable to expose the ways too many in the church today are concerned to remove the speck in their brothers' eye while ignoring the log in their own.

I would submit, however, that Pope Francis' call for the church to be focused on the poor, and indeed to become poor herself, has an additional dimension. Love for the poor is not merely an ethical mandate flowing from the words of Lord in the 25th chapter of Matthew. When the baptized encounter the poor, it is they, the poor, who evangelize us. It is they who remind us of the real human suffering in the world. It is they who do not succumb to pride. It is they who cling to the crucified Jesus because they have nothing else to cling to. Their faith is not a matter of moral checklists. Their faith is visceral, real. In Buenos Aires, Pope Francis ministered directly to the poor, and he still seems more comfortable with them than with the potentates of the world. He shows a certain holy impatience with those who are concerned about what is proper or who has the power or anything else that keeps them from the reality of human suffering.

In holding up Catholic social doctrine in ways it cannot be spun by the defenders of neo-liberalism and in linking love for the poor with evangelization, the Pope Francis is trying to return the church to its roots. Jesus went to the poor and the marginalized and preached to them, not to the powerful and the affluent. A church that follows in his footsteps is what Pope Francis wants. It is what we should all want, together, filled with the love of Christ, extending our hands and our hearts to our suffering brothers and sisters and accompanying them. It is to this last theme, accompaniment, I shall turn tomorrow.

Vatican | Pope Francis' fourth anniversary: a church rooted in love for the poor

Vatican: No interreligious prayer at Assisi