Previewing the USCCB meeting in Indianapolis 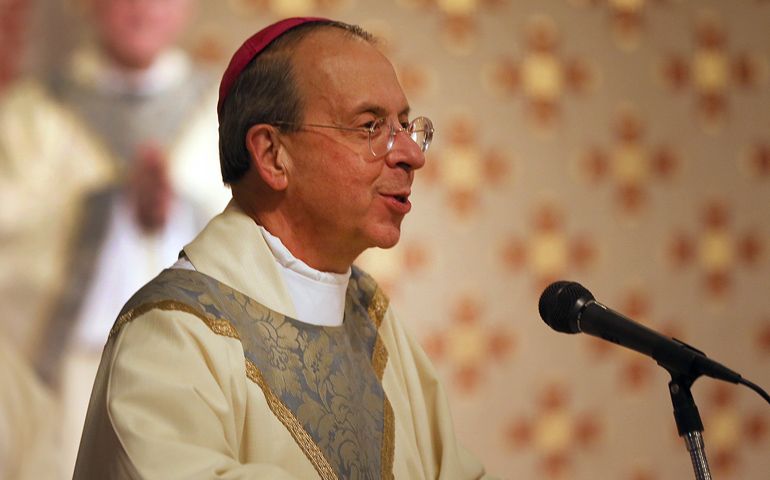 The U.S. bishops gather in Indianapolis this week for their annual spring meeting. As is typical of the June meeting, there is not a lot on the agenda and some bishops do not even make the effort to attend. This is a problem because this year is far from typical in the life of the nation and the bishops need to find their moral voice.

Regrettably, in recent years, that moral voice has disproportionately been focused on the contraception insurance mandate ordered by the Obama administration. President Trump had promised to rescind the mandate but has not done so. A leaked copy of a proposed expansion of the exemptions from the mandate earned a favorable press statement from Archbishop William Lori, chairman of the USCCB Ad Hoc Committee on Religious Liberty. If it is rolled back, then contraception coverage will become like the Mexico City Policy on denying funding to organizations that provide abortion services overseas: When the White House changes hands, the policy will reverse. Is this really a victory? Does this place religious liberty in a safe place or does it subject the issue to further partisanship and special interest wrangling?

While the Democrats were unwilling, and foolishly unwilling, to compromise, it can be fairly said that neither side took seriously the Supreme Court's order to find a compromise. Both sides preferred to win. No one should be surprised that politicians have a narrow moral compass, but bishops should be more far-sighted, no? Now, when they have a friendly administration on this issue, is precisely the time to reach out to the women's groups and others who deride the importance of religious liberty. Now is the time to be magnanimous and dial back the vitriolic and hysterical language that was too often and too recklessly hurled at the Obama administration. Unfortunately, I doubt the bishops think this is the case. They allowed themselves to be convinced that the mandate was a bigger issue than it really was, morally, legally or politically. I do not see them finding a more mature and responsible stance until Pope Francis makes about another 30 appointments to the stateside bench: We need more bishops who are at least a little bit allergic to these inward-looking issues, founded on an inflated concern with personal, usually sexual, purity, and which make the Catholic Church look self-absorbed.

The reason this fixation is so unfortunate at the moment is because the moral voice of the church is needed as never before. There is a real threat to health care in this country, and especially to Catholic health care, if the Republicans in Congress follow through on their plans to repeal and replace the Affordable Care Act (ACA), better known as Obamacare. The Republicans in the Senate are moving forward with their repeal effort, using the budgetary process known as reconciliation to get the law through with only 50 votes.

The CBO has projected that 23 million mostly poor people will lose their health insurance in the next decade, if the GOP proposal becomes law. Half of that number will lose insurance in the first year. The burden of costs will be shifted from wealthier Americans to poorer Americans, and from healthy and younger Americans to ill and elderly Americans. Some Americans, again especially poorer Americans, who have gotten health insurance for the very first time under the ACA's Medicaid expansion, will now lose it. And the future will be grim for those still on Medicaid as the proposed cuts will cause states to cut benefits, impose waiting lists, implement unaffordable financial obligations on beneficiaries, or otherwise restrict access to services. And why? Because the Republicans are intent upon enacting massive tax cuts for the top one percent.

Catholic health care will be especially harmed under these proposals just as it has been especially helped by the ACA. Catholic hospitals have always delivered a disproportionate amount of the nation's charity care, health care for people who can't pay for it. Before the ACA, our Catholic hospitals were eligible for programs that reimbursed them because of the high percentage of care offered to the indigent. Those programs have been phased out as the ACA took effect and more and more poor people had basic health insurance through Medicaid. The GOP proposals do not restore those pre-ACA programs, even while they cut back the Medicaid expansion. Sr. Carol Keehan, president of the Catholic Health Association explained all this to me in an article I wrote weeks ago when the House was debating the bill.

The Republicans are not only taking aim at Catholic health care. Their proposed cuts in foreign aid will cripple the ability of organizations like Catholic Relief Services to continue their comprehensive development work around the globe. Catholic Charities will see its budgets slashed while the needs of those they serve only grow as a result of proposed cuts in essential anti-poverty programs like food stamps. Economic and social inequality which church teaching has condemned explicitly will increase. Arms manufacturing and trading in arms will increase too.

Bishop Marcelo Sanchez Sorondo* was not wrong to characterize President Trump’s decision to pull the U.S. out of the Paris Accords as a "slap in the face" to Pope Francis. Not only was the importance of climate change a central focus of the president's meetings at the Vatican, but concern for climate change has been a central focus of this papacy, the subject of the encyclical he gave to Trump as a gift and which Trump promised to read. Do the bishops think he read it?

On immigration, the president and his allies in Congress have already sowed fear throughout the immigrant community, with raids picking up people who have committed no crimes and scaring the rest. In one of the most obvious examples of racism from public officials in my lifetime, the administration almost never mentions the word "immigrant" without modifying it with the adjective "criminal" or "dangerous" or "illegal." Most of those immigrants are Catholics. If the bishops do not stand up for them, if they do not start thinking in terms of leading massive civil disobedience, they will have squandered whatever moral authority they have left.

Beyond any particular issue, most of the bishops I know are increasingly concerned that the divisions within the political culture are seeping into the church. Last week, at the ordination of Bishop Steven Biegler in Cheyenne, Cardinal Blase Cupich said in his homily that unity was "the nonnegotiable goal of a bishop's ministry." But, as I have noted before, it is one of my frustrations that when the cultural warriors control the bishops' conference, they seek to win, and when the pastors are in charge, they try to keep everyone together, a process that moves the church steadily to the right over time. I agree that unity should characterize the bishops' ministry, in their dioceses and acting together as a body. But, to do so, much will have to change.

I suggest that the bishops this week ask themselves if they are following the lead of the pope as they select their priorities and chart their public stance. Even more importantly, I hope they will seek to follow the lead of the Master! It is always a good time to pursue unity, but there are also times when prophecy beckons, and in the Age of Trump, I think the bishops need to consider seriously what damage this man is doing to the republic and to the church, and how they are going to respond to it. The times are not typical, and the bishops need to recognize just how dangerous the times are. Before the conference soft pedals its opposition to the president because it hopes he will rescind the contraception mandate, let them remember the dreadful sentence in the Book of Daniel: You have been weighed in the balance and found wanting.

Previewing the USCCB meeting in Indianapolis