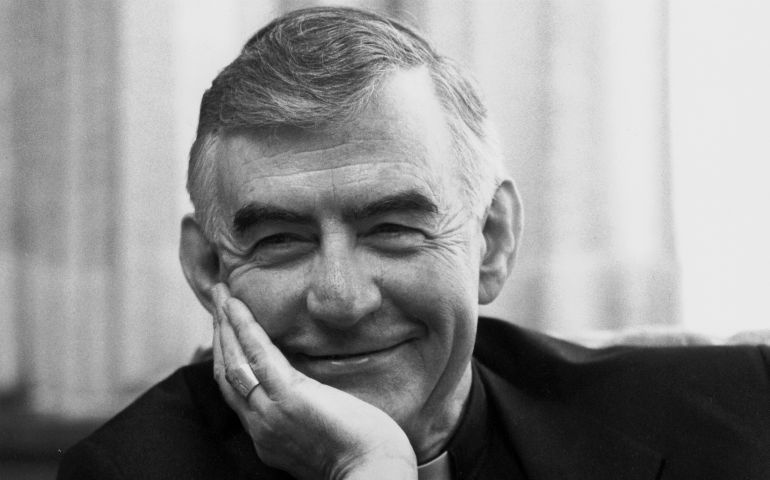 "The church is always her best at a funeral," a priest once said to me. Yesterday, watching the obsequies for Archbishop John Raphael Quinn, the archbishop emeritus of San Francisco, I could not have agreed more.

My colleague Tom Roberts has already written a beautiful appreciation of the late archbishop. But I want to call attention to the twin sermons delivered in the Cathedral of St. Mary of the Assumption in San Francisco, the first at the vigil the night before by Bishop Robert McElroy of San Diego, and the second at the funeral Mass by Archbishop John Wester of Santa Fe.

Wester told the congregation that he thought it unfair that Bishop McElroy got to preach on an uplifting, post-Resurrection passage while he had drawn a somber reading from Ecclesiastes. I was a bit surprised by the archbishop's remark, as I have always warmed to the repeated phrase of that great book of the Hebrew Scriptures: "Vanity of vanities, all is vanity." It is good to remember this, especially when we contemplate the death of a loved one or our own: We can toil, we can love, we can become saints or sinners, but in the end, "the dust returneth to the earth as it was, and the spirit returneth unto God who gave it." Maybe it is because Archbishop Wester is such a good man, and I am such a sinner, that I do not find Ecclesiastes as dispiriting as he does!

But what struck me most about the archbishop's sermon were the repeated references to the person of Jesus Christ. In recalling the life of Archbishop Quinn, especially his ministry, such references would seem expected, but they were also frequent in Wester's explanations of the many friendships the archbishop had made, the outpourings of affection in the last months as he struggled from one health crisis to the next, and in the common experiences they had shared themselves as priests and bishops.

This struck me because the conservative rap on so-called "liberal bishops" of the Quinn era is that they lost the church's Catholic identity. But the identity of the church can only be rooted in the experience of the risen Lord, and in being his disciples together. Quinn did not see the church in the sectarian terms some later prelates have championed, but there was no doubt about the Catholic identity of his ministry or his friendships. Indeed, it was a mark of his closeness to the Lord that it was impossible to discern where his ministry ended and his friendships began, as Wester made clear.

Following Christ, as Quinn made clear in his life and Wester cited in his sermon, entails transformation, ongoing transformation. It is not about stasis. There is no "golden age" in the life of the church because every age is filled with frustrations and challenges waiting to be transformed by the love of Christ. It is here that we see why Quinn was such a fan of Pope Francis, and vice versa, as both men recognized that it is in our own sins and limitations that we encounter the savior, not in our own achievements and boasts.

The night before, Bishop McElroy preached on the encounter of the apostles with the risen Lord by the seashore, found in the 11th chapter of John's Gospel. It was, the bishop explained, the text with which Archbishop Quinn would always conclude his retreats, pointing as it does to the interrelationship of discipleship, the experience of the resurrection, and the celebration of the Eucharist.

Bishop McElroy also picked up on a theme that Wester would make so central in his sermon the next day, the transformation Christ effects in his disciples and how open Archbishop Quinn was to that transformation, to the changes it demanded, to the new. McElroy said:

The second movement of tonight's Gospel is the disciples' gradual understanding of the resurrection experience itself. At first, the figure on the shore appears to be a stranger, radically different from the man Jesus whom they had accompanied every day for almost three years. But then they comprehend it is the Lord. The risen Jesus is both earthly and ethereal: He is translucent and yet eats with them. He prepares their meal. Raymond Brown points to these dual realities of continuity and transformation as the essential elements of Christ's resurrection and of our own. In the fullness of the kingdom our identities will survive, yet we will be radically altered. The experience on the seashore conveys to the disciples that both their own life in eternity and their new life of discipleship and ministry must be radically interwoven with the experiences of continuity and transformation.

Bishop McElroy was speaking of his great friend and mentor, Archbishop Quinn, but these words could be applied equally to their speaker. It is little wonder that McElroy, like Quinn, is a favorite of Pope Francis.

Indeed, I could cite almost any paragraph of this marvelous sermon as an example of how deeply McElroy was shaped by his mentor Quinn and why both men are of such inestimable significance to the life of the church at this moment. I could say the same of Archbishop Wester's sermon the next day. Archbishop Quinn was, for many in the church in the United States, a last link with the years of the Second Vatican Council and with the papacy of Pope Bl. Paul VI. His intellect, so redolent of his love for Newman, was as sharp as his manner was gentle. Of course, Pope Francis saw in him a kindred spirit and sees the same in McElroy and Wester. The same goes for Cardinal Blase Cupich, who conducted the commendation.

If you are a priest for as long as McElroy, Wester and Cupich have been, you have done a lot of funerals. All three are men of deep and abiding prayer. All three have given their lives to Christ's church. Yet, watching the Mass and the vigil, it was impossible not to notice that all three men's voices cracked at some point in their remarks. It was a remarkably human moment breaking into the familiar prayers of the funeral liturgy. They lost a friend and mentor whom they loved deeply. The church in the U.S. has lost one of its great leaders from a time of almost unimaginable transformation. Thank God he helped to form successors of the apostles to carry on his work. We think of the late '70s as the apotheosis of the "Quinn era," but just as Pope Francis is, in a certain way, building on foundations laid by Paul VI, maybe our God of surprises has one more in store: Maybe we are just beginning the "Quinn era."

Cardinals, theologians gather to plan how US church can support Pope Francis