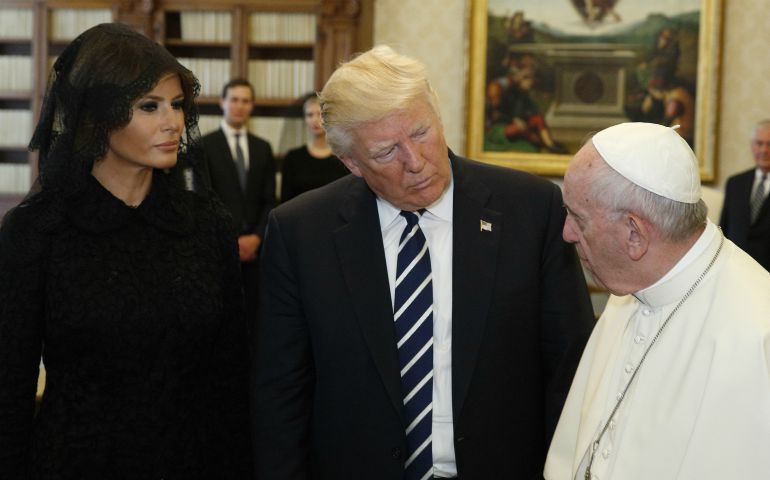 Pope Francis talks with U.S. President Donald Trump as they exchange gifts during a private audience at the Vatican May 24. (CNS photo/Paul Haring)

The Vatican had been nervous about today's meeting with President Donald Trump. A source close to the Holy Father told me he had been practicing his Russian all week! (That's a joke.) Seriously, there were concerns that Trump might go into a Twitter rant after the meeting, or mischaracterize something the pope had said. So far this morning, the Twitter feed is silent.

You could tell Trump was on his best behavior when the first lady, Melania Trump, showed up with a black veil covering her head. She quite conspicuously did not wear any head coverings while in Saudi Arabia where it is also customary to do so. As for the president, his smile as he stood next to the pope seemed to fill the photo.

The statement from the Vatican after the meeting did not disclose very much:

During the cordial discussions, satisfaction was expressed for the good existing bilateral relations between the Holy See and the United States of America, as well as the joint commitment in favour of life, and freedom of worship and conscience. It is hoped that there may be serene collaboration between the State and the Catholic Church in the United States, engaged in service to the people in the fields of healthcare, education and assistance to immigrants.

The discussions then enabled an exchange of views on various themes relating to international affairs and the promotion of peace in the world through political negotiation and interreligious dialogue, with particular reference to the situation in the Middle East and the protection of Christian communities.

I suspect that is the first time the word "serene" has been used in a communication about a meeting with Trump. But the statement indicates the pope and the president touched on issues where there has been some agreement, such as abortion and conscience rights, and stayed away from any debate about refugees or economics.

You can compare this communiqué with the one issued the other day when the President of Ireland visited:

The cordial discussions began by evoking the constructive relations that unite the Holy See and Ireland, and their collaboration. The parties then focused on several themes of mutual interest, such as the protection of the rights of humanity and its dignity in every stage and condition of life, the issue of migration and the welcome of refugees, safeguarding the environment, and sustainable development. Special attention was paid to the young and families. The importance of ethical criteria in facing the challenges of globalization, especially at economic level, was then highlighted.

Finally, there was an exchange of views on the future prospects of the European project.

That sounds like a more substantive discussion and one more attuned to the pope's agenda, but the tone of both communiqués is similar. People who were expecting the meeting between Francis and Trump to turn into a smackdown were projecting their worst fears about Trump onto the meeting. He knows it would not help him to have a public fight with the pope at this moment.

I can sympathize with those who felt a bit of revulsion watching the pope exchange gifts and smile for the camera with our president. While Trump was posing for his photo-op with the Vicar of Christ, his administration dropped a satanic budget on the country. "The proposed sharp increases in defense and immigration enforcement spending, coupled with severe reductions to non-defense spending for the poor, is profoundly troubling," said Bishop Frank Dewane, chair of the Committee on Domestic Justice and Human Development at the bishops' conference. "Such spending reductions would have an impact on the vulnerable in every state. Crucial programs, such as the Supplemental Nutrition Assistance Program (SNAP), which provides critical nutrition assistance to hungry people, would suffer from deep cuts, and the Community Development Block Grant (CDBG) program, which gives states and cities more flexibility in how they combat poverty, could be eliminated. When defense spending, which already exceeds that of the next eight nations combined, is receiving a large increase in funds, it is hard to reconcile the significant cuts that are being made to crucial services such as health care, nutrition, income security and anti-poverty programs."

Others shared the bishop's dire warnings about the president's proposals. "President Trump's new budget should lay to rest any belief that he's looking out for the millions of people the economy has left behind," wrote Robert Greenstein at the Center for Budget and Policy Priorities. "He proposes steep cuts in basic health, nutrition, and other important assistance for tens of millions of struggling, low- and modest-income Americans, even as he calls for extremely large tax cuts for the nation's wealthiest people and profitable corporations." To reverse the words of the blessed Mother, Trump sends the poor away empty and fills the rich with good things.

In addition to the more than 20 million expected to lose their health insurance because of the GOP effort to repeal and replace the Affordable Care Act, the new budget proposal slashes Medicaid by an addition $610 billion. He proposes to cut $190 billion from SNAP. The Trump budget takes $72 billion away from programs that help those with disabilities. He also plans to cut programs that help the elderly poor pay their heating bills, kids get nutritional lunches at school, and the indigent get rental assistance. This is a budget for social Darwinism.

Is this what Knights of Columbus Supreme Knight Carl Anderson meant when he called this a "pro-life moment" for the nation? Or was he forgetting that he leads a Catholic organization now and is no longer a GOP propagandist?

I suspect that Trump's Catholic advisors have been telling him that so long as he supports further restrictions on abortion, he will be fine with the bishops. And, for about half of the bishops in the country, that's true. But the other half, and the growing half, are following the pope into broader pastures of concern. Their priests look out at the pews and they see the faces of Latino parishioners: They are the ones with darker skin who come for baptisms. The Anglos are paler and come for funerals. In the months since Trump's victory, those Latino faces betray fear that wasn't there before. The bishops who are paying attention, who haven't sold their souls to the Republican Party, they will not be shy about defending our Catholic immigrants, documented or undocumented. I hope, however, that they will not mimic the bishops who sought salvation in the arms of the Republicans by seeking it with the Democrats. It is time for the bishops' conference to be more like Pope Francis, concerned about a range of issues, never looking for a fight, willing to smile for the cameras with any political leader but never letting their political involvement become partisan.