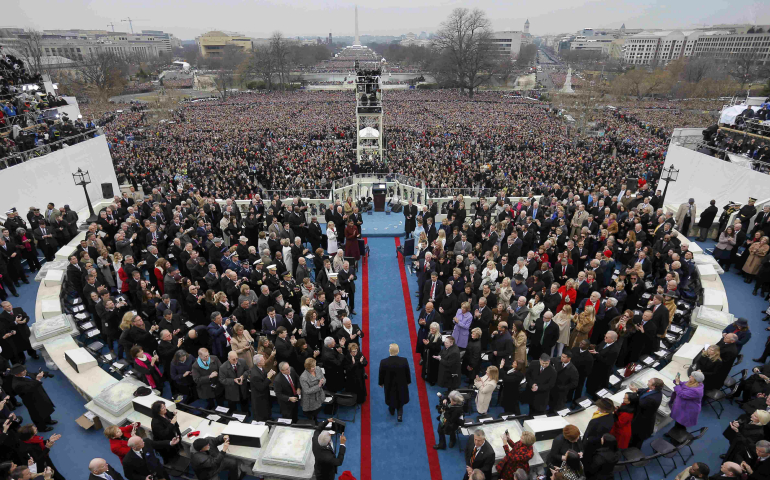 U.S. President-elect Donald Trump is applauded as he arrives for his Jan. 20 swearing-in as the country's 45th president at the U.S. Capitol in Washington Jan. 20. (CNS photo/Rick Wilking, Reuters)

The sense of whiplash, or is it more accurately described as a "through-the-looking-glass" effect, did not take long to hit America in the face. Within 48 hours of Donald Trump's being sworn in as the president of the United States, we find ourselves discussing the meaning of "alternative facts" and wondering if our new president's tics are simply the result of a his personal psychological constitution or are a brilliant ploy.

The reactions to President Trump's inaugural speech were mostly either negative or evasive. Democrats and liberals panned the speech as excessively dark, populist and nativist. Republicans cited the one or two lines that spoke to a sense of national unity and ignored the rest. But, for the inner circle, the people who whisper into our new president's ear, they liked the speech and discerned a specific lineage.

"I don't think we've had a speech like that since Andrew Jackson came to the White House," senior counselor Steve Bannon told The Washington Post's Robert Costa. "But you could see it was very Jacksonian. It's got a deep, deep root of patriotism there." The "patriotism" was actually nationalism, and that in its ugliest attire: nativist, petulant, isolationist, self-serving.

Nor was there anything particularly "Jacksonian" about Trump's speech. It is true that Jackson was a populist, but he harnessed the power of government to confront the power of economic elites. Trump chastised "a small group in our nation's capital [that] has reaped the rewards of government while the people have borne the cost" and has filled his cabinet with the economic elite. I went back and read Jackson's first inaugural address. He acknowledged the other branches of government. He honored the work of his predecessors. Jackson's warnings about the danger of a standing army remind us of the difference in historical epoch from our own. The speech's most contentious lines were these:

The management of the public revenue — that searching operation in all governments — is among the most delicate and important trusts in ours, and it will, of course, demand no inconsiderable share of my official solicitude. Under every aspect in which it can be considered it would appear that advantage must result from the observance of a strict and faithful economy. This I shall aim at the more anxiously both because it will facilitate the extinguishment of the national debt, the unnecessary duration of which is incompatible with real independence, and because it will counteract that tendency to public and private profligacy which a profuse expenditure of money by the Government is but too apt to engender. Powerful auxiliaries to the attainment of this desirable end are to be found in the regulations provided by the wisdom of Congress for the specific appropriation of public money and the prompt accountability of public officers.

Yes, the national debt loomed larger then as an ideological touchstone, but Jackson's words utterly lacked the sheer nastiness of Trump's dystopian vision.

The next day, President Trump headed to the headquarters of the Central Intelligence Agency in Langley, Va., for what was billed as a rapprochement with the intelligence community. He has, since the election, vilified that community, comparing their tactics to those of the Nazis, suggesting they were manufacturing evidence about Russian hacking and reminding them that they were wrong about the existence of weapons of mass destruction in Iraq. But,  after briefly assuring the intelligence officers of his support and blaming the rift on the media, he went off-script, way off-script, rambling on about how the media had lied about the size of the crowds the day before. He then sent his new press secretary, Sean Spicer, out to repeat the falsehoods. It was bizarre, yes, but also powerfully distracting. The media stopped discussing his dreadful speech. They also did not have a chance to repeat the reasons for his rift with the intelligence community, the Russian hacking, etc.

Maybe this is just Trump being Trump. Maybe he is really so thin-skinned that the idea that Barack Obama had more people at his inauguration in 2009 is an idea he cannot abide. Maybe he is so myopic that he thinks his perspective, near to ground level, from which the crowds really do appear to stretch to length of the National Mall, is the only valid perspective, and so the media has no business showing the photos taken from the top of the Washington Monument, photos that showed the enormous disparity between the two audiences. Maybe.

But perhaps the man is a genius at media manipulation. He certainly didn't get to where he is on the strength of his policy expertise. Maria Konnikova, writing at Politico, explores the way lies work on the human brain, how we have to accept a lie, even if only for a minute, before assessing its validity. "Unfortunately, while the first step is a natural part of thinking — it happens automatically and effortlessly — the second step can be easily disrupted." And when the lies keep coming, the sorting out of truth from fiction becomes even more difficult. Konnikova observes:

Our brains are particularly ill-equipped to deal with lies when they come not singly but in a constant stream, and Trump, we know, lies constantly, about matters as serious as the election results and as trivial as the tiles at Mar-a-Lago. (According to his butler, Anthony Senecal, Trump once said the tiles in a nursery at the West Palm Beach club had been made by Walt Disney himself; when Senecal protested, Trump had a single response: "Who cares?") When we are overwhelmed with false, or potentially false, statements, our brains pretty quickly become so overworked that we stop trying to sift through everything. It's called cognitive load — our limited cognitive resources are overburdened. It doesn't matter how implausible the statements are; throw out enough of them, and people will inevitably absorb some. Eventually, without quite realizing it, our brains just give up trying to figure out what is true.

Most of my learned friends with whom I consult regularly think Trump is simply a big baby, a narcissist the likes of which we have never seen, even in a city filled with politicians. I suspect they are right. But I am not willing to discount the possibility that Trump operates out of certain rules: If a storyline is damaging, change the story; when confronted with evidence you don't like, deny it; when in doubt, blame the media and show how tough you are. Whatever the sources of these rules, be they psychological damage, a bizarre admixture of "the Young Pope" and "the Young Victoria" or political cunning, they appear to be what we are all in for these next few years. And while neither option offers any comfort, before you dismiss the latter possibility, remember that he is the one living in the White House.