Will the March become a movement? 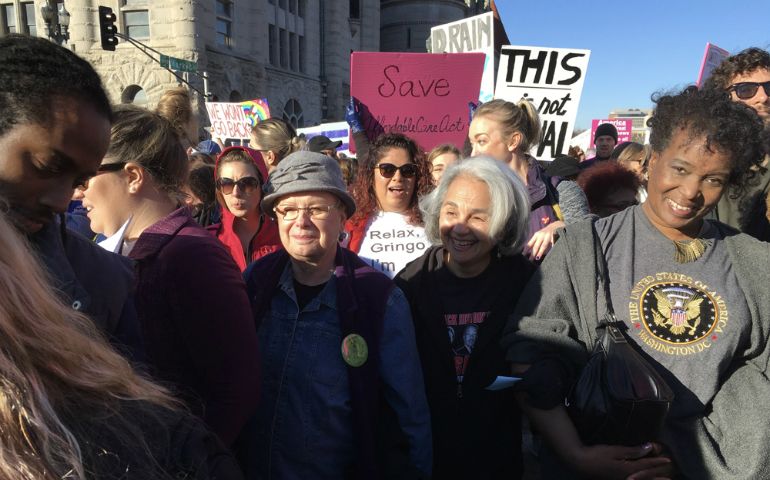 The Women's March turned out to be something different from what was planned. In cities like Washington and Chicago, the turnout so exceeded expectations, there was not enough space for all the people to march, so they mostly turned it into a rally. Walking or standing, they made a statement. Going forward, the question is whether that statement will prove a one-off or if we are witnessing the birth of a movement.

What most fascinated were not the crowd sizes, but the geographic reach of the protests. The day after President Donald Trump delivered an inaugural address that was the most nativist in history, the Women's March was global: Women marched not only in Washington and Chicago and San Francisco but in London and Tel Aviv. The forces of a pungent and creepy nationalism have been on the rise: The Brexit vote in the U.K.; the election of nationalist governments in Poland and near-miss in Austria; the ever-increasing share of the vote garnered by Marine Le Pen in France. The election of Donald Trump, however, seems to have awakened people to the fact that they cannot take liberal democracy for granted, and that while globalization has been far from benign for many people, the nationalist alternative of the right is yet worse. Will the Women's March get politicians of the left thinking about how to make globalization less harsh?

It was also clear from reports on the ground, most especially those at our own Global Sisters Report, that the marchers were there for a variety of reasons. Many people had signs directed at Trump's misogyny. Many had signs in favor of women's rights, and some specifically cited the right to reproductive freedom. Others had signs calling for environmental protection. Some had signs in solidarity with different minority communities. At slightly more than half the population, why should we be surprised that women bring a variety of concerns with them? And, insofar as opposition to Trump was the main reason for the march, one could see in the diverse multitude of signs the outlines of a coalition.

This is important because coalitions only get to act on any particular item of concern if they win an election. The response to Trump must become a majoritarian coalition. In advance of the march, New Wave Feminists, a pro-life group, was allowed to be an official sponsor and later removed from the sponsor rolls after protests from pro-choice organizers. Planned Parenthood and NARAL were throwing their weight around. The decision to bar the pro-life group was stupid. Why not appear as inclusive as possible of all women who, for a variety of reasons, wished to voice their dissent to the new chief executive? And, who gets to decide who is and is not a feminist? Cecile Richards? Emily Crockett at Vox looked at the issue of pro-life feminism and its place within a broader coalition. If Democrats ever want to retake the House or the Senate or the White House, they need to learn to respect people who differ from them on this one issue while agreeing on much else. Movements that hunt heretics are unhealthy. Movements that seek converts grow. Regrettably, the way some pro-life women were treated at the March looked more like the way Trump supporters treat his critics, even if from that news report it appears the pro-life group may have intended the provocation. The same cannot be said of New Wave Feminists or Democrats for Life.

For a movement to grow, it also needs a focus, and the easiest point of focus is always a point of opposition. Resistance is not a governing program, but it is a political organizing tool, and probably the most robust tool there is. In American politics, however, the shift from political tool to governing program must have at its center an economic message. This is unfortunate, a sign of the degree to which economic life dominates our culture, but it is a fact. Part of the problem the Democrats faced this year was the perception that they cared more about cultural issues like transgender bathrooms and abortion rights than about bread-and-butter economic concerns like the rising cost of child care and the ill effects of globalization. When Hillary Clinton was asked about NAFTA, she waffled. When she was asked about Roe she didn't.

Sir Isaiah Berlin, the great liberal philosopher of the 20th century, posited that the notion of freedom begins with the idea of being unchained, of a restraint being lifted. From this, he built his commitment to a negative conception of liberty, which, if taken to an extreme, ends in libertarianism. It undergirds parts of contemporary conservative politics, which see big government, its taxes and regulations, as the chain that must come off, and parts of contemporary liberal politics too, which cling to the idea that personal autonomy ends the argument over abortion and condones euthanasia. Both because of Trump's politics and his personality, a more communitarian politics must emerge from within the resistance to him.

It seems like something very basic was driving the attendance and the passion last Saturday, the sense that Donald Trump was, not only as a president but as a man, the kind of dismissive, full-of-himself, misogynistic male they rightly detest, every woman's nightmare as a date or a boss or a political leader. Resistance to Donald Trump will not likely deter him from his peripatetic course, but there are plenty of congressional Republicans up for re-election in 2018, and they surely took note. Resistance is not a political program, but it is a start.

Justice | Will the March become a movement?

Our differences will make the difference in our future