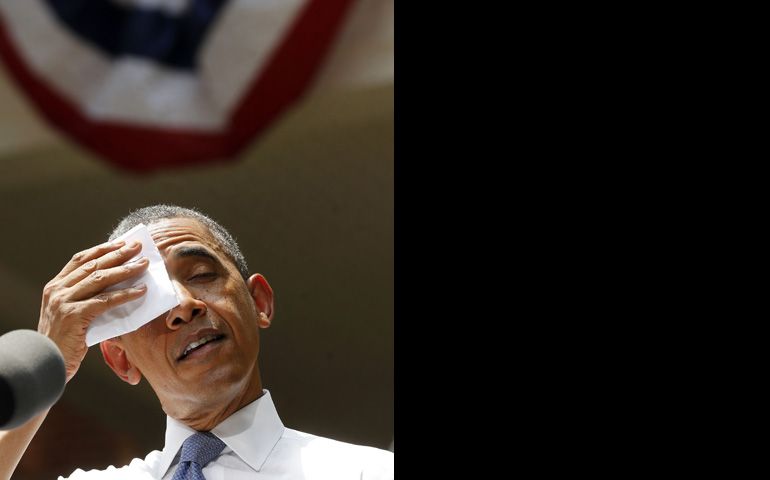 U.S. President Barack Obama pauses and wipes his forehead as he talks about his vision to reduce carbon pollution June 25 during a speech at Georgetown University in Washington. (CNS/Reuters/Larry Downing)

Climate change "demands our attention now," and the United States must become a leader on the issue, President Barack Obama stated on a warm Tuesday in Washington as he announced his multi-tiered plan for combating the global problem.

Wiping his brow numerous times after first removing his suit jacket as temperatures in the nation's capital exceeded 90 degrees, Obama stressed to the crowd of students at Georgetown University that addressing climate change is a challenge Washington must confront "on behalf of our kids."

"I refuse to condemn your generation and future generations to a planet that's beyond fixing," he said, stating before he revealed his plan that "I'm here to enlist your generation's help in keeping the United States of America a leader -- a global leader -- in the fight against climate change."

That includes implementing the first-ever federal carbon standards for power plants; continuing to invest in and increase energy consumption of clean energy projects on federal lands; and building off first-term progress in elevating energy efficiency standards for vehicles, buildings and appliances.

Adaptation efforts would focus on preparing communities for future severe weather events through increased information access and funding and resources for climate resiliency upgrades. As for international efforts, the president urged a global divestment from coal-fired power plants and a recommitment to negotiations to bring all countries — developed and developing — into a binding agreement to reduce the rise of greenhouse gas emissions.

[To learn more about the president's proposals, read NCR's earlier story or view an infographic breakdown of the plan.]

Anticipating critics' attacks on the carbon-curbing portion of his plan as a job killer and economy crusher, Obama pointed toward similar claims that met past environmental policies, such as the 1970 Clean Air Act and 1990 amendments to the law aimed at reducing acid rain.

The president acknowledged companies already adopting their own energy-related policies, such as the Climate Declaration signed by more than 500 businesses including General Motors and Nike, and Wal-Mart's pledge to cut greenhouse gas emissions by 20 percent as part of its shift toward 100 percent renewable energy power.

The president made clear that his proposal "does not mean that we're going to suddenly stop producing fossil fuels," but stressed that an all-of-the-above energy strategy must be about "more than producing oil" and "more than just building one pipeline," alluding to the controversial Keystone XL pipeline under review by the state department.

Obama said the pipeline's net effects on the climate "will be absolutely critical" to determining the project's fate.

"Allowing the Keystone pipeline to be built requires a finding that doing so would be in our nation's interest. And our national interest will be served only if this project does not significantly exacerbate the problem of carbon pollution," he said.

While his plan was restricted to executive actions, Obama said he was "willing to work with anybody" to address climate change, but wasn't willing to wait on Congress before beginning to act.

"Nobody has a monopoly on what is a very hard problem, but I don't have much patience for anyone who denies that this challenge is real. We don't have time for a meeting of the Flat Earth Society," he said.

Dan Misleh, executive director of the Catholic Coalition on Climate Change, said he welcomes the president's steps "and is encouraged that the administration has recognized the seriousness of the climate change problem, especially the threat to future generations."

"Climate change," he said, "has been recognized as a threat by the Church since 1990 when Blessed Pope John Paul II said that 'the gradual depletion of the ozone layer and the related greenhouse effect has now reached crisis proportions.' "

"We stand in support of the president's action and are grateful that he has chosen to take the lead," Patrick Carolan, executive director of the Franciscan Action Network, said in a statement.

"It is unfortunate that some political leaders have chosen to bury their heads in the sand and refuse to acknowledge what 97 percent of scientists, the past three Popes, the U.S. Catholic bishops and religious and community leaders from across the United States and the world have understood," he said.

In his speech, Obama expressed his belief that action, or inaction, on addressing climate change would become a measuring stick of the current generation for years to come.

"Someday, our children and our children's children, will look at us in the eye and they'll ask us, did we do all that we could when we had the chance to deal with this problem and leave them a cleaner, safer, more stable world? And I want to be able to say, yes, we did," he said.

[Brian Roewe is an NCR staff writer. His email address is broewe@ncronline.org. Sharon Abercrombie also contributed to this report.]