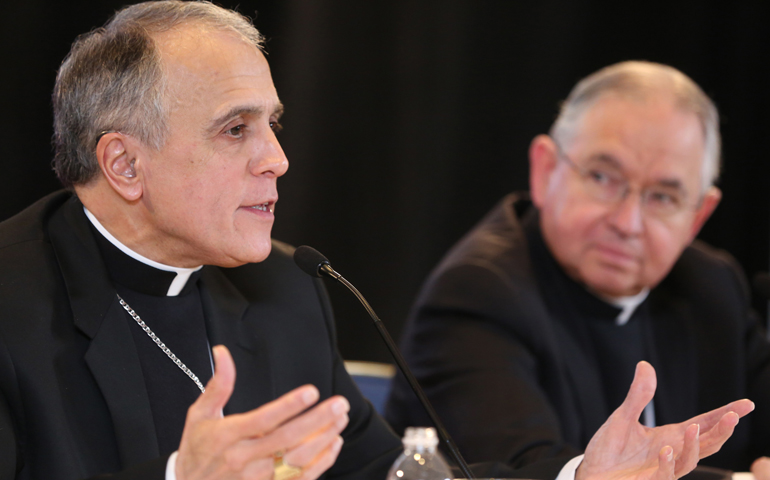 Cardinal Daniel DiNardo of Galveston-Houston addresses a news conference Nov. 15 at the fall general assembly of the U.S. Conference of Catholic Bishops in Baltimore. Seated to his left is Archbishop Jose Gomez. (CNS/Bob Roller)

There was little interesting or inspiring about the meeting of the U.S. Conference of Catholic Bishops in Baltimore this week. Much of the meeting was devoted to bureaucratic business like the approval of plans and programs, and minor liturgical and canonical items.

The most controversial item on the agenda was an increase in diocesan assessments (which failed) and a change in the assessment formula. Bishops, like taxpayers, don't want to see their taxes raised.

Some excitement surrounded the election of officers and committee chairs.

It was no surprise that Cardinal Daniel DiNardo of Galveston-Houston was elected USCCB president since he was elected vice president three years ago and the vice president normally succeeds the president. The election of Los Angeles Archbishop José Gomez was historic since not only is he the first Hispanic vice president of the conference, he is also a Mexican immigrant. He will undoubtedly be elected president in three years.

The two will be an interesting team. DiNardo is a blunt-speaking, no-nonsense prelate whom journalists are looking forward to covering. Gomez, on the other hand, is a gentle, pastoral bishop who shrinks from the limelight. At a joint press conference, DiNardo answered question after question while Gomez appeared happy to simply sit back and observe. But after each response, DiNardo asked Gomez what he thought, encouraging him to respond. DiNardo would not let Gomez hide.

The vote for chair-elect of the USCCB Committee on International Justice and Peace was the most revelatory of the current makeup of the conference membership. Archbishop Timothy Broglio of the U.S. Archdiocese for Military Services beat out Bishop Robert McElroy of San Diego for chair by a vote of 127-88. Moderate bishops (there are very few liberal bishops) voted for McElroy and the conservatives voted for Broglio.

As personal secretary to Cardinal Angelo Sodano, the Vatican secretary of state (1991-2006), Broglio antagonized then Cardinal Bergoglio and the other Argentine bishops whose recommendations for episcopal appointments were routinely rejected by Sodano. McElroy, on the other hand, has pushed the conference to be more supportive of the priorities of Pope Francis. He probably lost some votes by pushing too hard.

The vote for chair-elect of the Committee on Evangelization and Catechesis had a similar breakdown with 122 for Bishop Robert Barron, auxiliary bishop of Los Angeles, and 90 votes for Bishop Frank Caggiano of Bridgeport, Conn.

A routine agenda item for the meeting turned out to be one of the most emotionally charged. Carolyn Woo, the president and CEO of Catholic Relief Services, the international relief and development agency of the U.S. bishops, was slated to deliver a report to the bishops on the work of CRS.

It was Woo's last such address since in January she is ending her five-year term as head of CRS and will return to South Bend, the home of Notre Dame business school where she worked when the bishops recruited her.* Although Woo's immediate predecessor, Ken Hackett, had led Catholic Relief Services for 18 years — making her five-year tenure seem short by all appearance — hers was a routine move back to an academic life.

Woo's address Monday seemed routine as she described CRS's work, but then there was a hitch in her voice and she could be seen fighting back tears when she said she wanted to talk about "the divisions I see" that hinder the work of Catholic Relief Services.

She didn't give details about these divisions, but Catholic Relief Services has been attacked by right-wing Catholics accusing it of ignoring church teaching on birth control and abortion.

"Wow, I thought, when can we collaborate?" Woo said. She ended her presentation with what she called "a simple request."

"Whenever you are wondering what CRS is doing," she told the bishops sitting before her, "I'd like you to ask the question differently, 'What are we doing?' "

Archbishop Paul Coakley of Oklahoma City, Okla., chair of the Catholic Relief Services board, followed Woo on the podium and he picked up where she left off. He told his fellow bishops that as Woo was speaking he had received another scandalous email from the LePanto Institute, which devotes a whole page of its website to attacking CRS.

The LePanto Institute describes itself as "a research and education organization dedicated to the defense of the Catholic Church against assaults from without as well as from within," including from "heretics" and "traitors."

Coakley told the bishops, "I want you to know that Catholic Relief Services is Catholic through and through. I hope you will not give any credence to this particular blogger."

The room responded with applause.

Although they are suffering terribly,  Mansour does not portray the Christians as mere victims, but rather as very active in responding to the terrible tragedy of their countries.

His frustration that the plight of Christians in the Middle East has been ignored was evident. To help these Christians he called for advocacy, humanitarian aid and ecumenical support.

With regards to advocacy, he asked the bishops to urge the U.S. government to increase U.S. humanitarian aid and development assistance for refugees as well as internally displaced persons. He also called for aid to those countries in the region hosting large refugee populations.

With regard to admission of refugees into the United States, "All of the bishops have been very clear that we welcome refugees," he said at the press conference on Thursday. "We have been doing it for years. We are all part migrants."

In response to a question from the NCR, he said he did not want American boots on the ground nor the arming of Christian militias. He did note that Russia's support and America's opposition to Assad is complicating matters in Syria. "The West should not determine who stays as a public figure and who doesn't," he said. "Those are things that have to be done on the ground."

The bishop thinks that "because Russia was on one side and America was on another side, it made that civil war a lot more unclear and a lot more filled with hatred."

The need for humanitarian aid for Christians in the Middle East is great. Syrians will need help in rebuilding their churches, hospitals, schools, homes and livelihoods. He suggested linking or twining parishes and dioceses in the U.S. with those in the Middle East. He also called for continued funding from groups like Catholic Relief Services, Aid to the Church in Need, Catholic Near East Welfare Association, and the Knights of Columbus.

Finally, he called for working with interfaith partners to draw attention to the need for basic human rights, full citizenship rights, and religious freedom for people in the Middle East. He noted that Catholics have good relations with Jews and Muslims but all three groups need to work together for peace.

Much of the USCCB November meeting was boring. Much to the disappointment of the journalists, the bishops were not interested in talking about the new president, Donald Trump, at least not in public sessions. Outgoing USCCB President Joseph Kurtz, archbishop of Louisville, said the bishops were uncertain where Trump stood on many issues but they looked forward to having conversations with the incoming administration in order to find out what parts of the bishops' agenda might get adopted.

President-elect DiNardo was hopeful that judicial appointments would favor the bishops' pro-life agenda.

The bishops, however, were clearly worried about what Trump might do to immigrants, especially in breaking up families and deporting those who are undocumented. Early on the first day, they approved a statement in support of the immigrant community in the United States. The dialogue they hope to have with the administration will be helped by the fact that the two new leaders of the conference come from the two states with the most immigrants, and one of those leaders is an immigrant himself.

*A sentence has been corrected to clarify that Woo is returning to South Bend, Ind., after she ends her five-year term as head of CRS.

[Dennis Coday assisted on the CRS section of this column.]