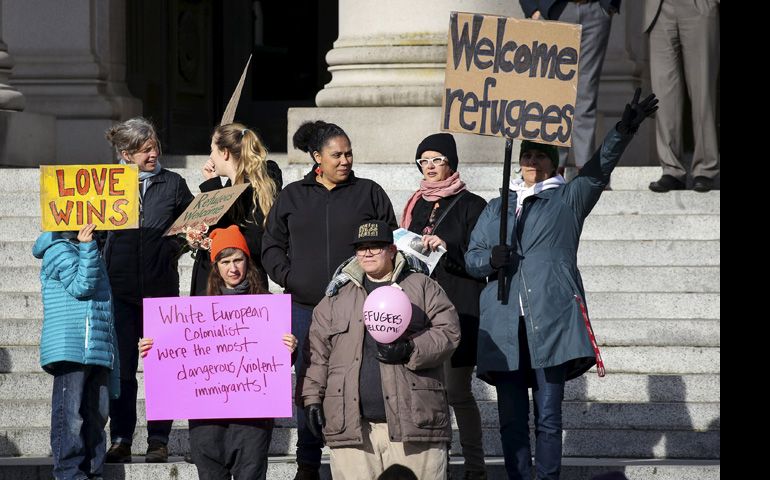 Thirty Christian leaders, including Cardinal Donald W. Wuerl of Washington, have written a letter to Secretary John Kerry calling on the State Department to include Syrian and Iraqi Christians among those listed as victims of genocide by the Islamic State group (also known as IS, ISIS, ISIL, or Daesh).

"We recently learned that a State Department finding is imminent that ISIS is committing genocide against the Yazidis," an Iraqi ethnic and religious group whose villages were attacked by the Islamic State group. "We would wholeheartedly endorse that finding, but we are deeply troubled by the prospect that the Department's statement will either omit or reserve judgment on whether ISIS is committing genocide against Christians" in its territories.

The signers of the Dec. 4 letter asked for a meeting with Kerry "to present the available evidence of ongoing genocidal acts against Christians in Syria and Iraq at a level where it can be considered before a finding is made."

“ISIS genocidal campaign against Christians continues today,” states the letter, “with hundreds of Christians remaining in ISIS captivity, and with summary executions, including by beheadings and crucifixions, occurring as recently as only a few months ago."

"Pope Francis has called ISIS' crimes against Christians by their proper name: 'genocide,'" says the letter. "The U.S. Conference of Catholic Bishops and Christian leaders in the Middle East have done so as well. We agree, and are hopeful that, once you have seen the evidence, you will too."

The letter writers say they "have extensive files supporting a finding that ISIS’ treatment of Iraqi and Syrian Christians, as well as Yazidis and other vulnerable minorities," is genocide.

"They include evidence of ISIS assassinations of Church leaders; mass murders; torture, kidnapping for ransom in the Christian communities of Iraq and Syria; its sexual enslavement and systematic rape of Christian girls and women; its practices of forcible conversions to Islam; its destruction of churches, monasteries, cemeteries, and Christian artifacts; and its theft of lands and wealth from Christian clergy and laity alike."

They will also present to Secretary Kerry "ISIS’ own, public statements taking 'credit' for mass murder of Christians, and expressing its intent to eliminate Christian communities from its 'Islamic State'."

Genocide is a word that should not be tossed about casually. It is a legal term with a strict definition.

According to the 1948 Convention on the Prevention and Punishment of the Crime of Genocide:

[G]enocide means any of the following acts committed with intent to destroy, in whole or in part, a national, ethnical, racial or religious group, as such:

(a) Killing members of the group;

(b) Causing serious bodily or mental harm to members of the group;

(c) Deliberately inflicting on the group conditions of life calculated to bring about its physical destruction in whole or in part;

(d) Imposing measures intended to prevent births within the group;

(e) Forcibly transferring children of the group to another group.

In order for barbarous actions to be genocidal, they must be aimed not just at individuals but at "a national, ethnical, racial or religious group" and the "intent" must be "to destroy" the group. Thus, the actions of the U.S. Government against Native Americans often amounted to genocide.

Note that "political" groups are not included in this definition. Thus the actions of Chilean and Argentine military regimes were not technically genocide when they killed thousands of political opponents. Nor are terror tactics aimed at scaring a population into submission technically genocide because their intent is not to destroy a group, but simply to force it into submission. Apartheid and slavery are not genocide.

In other words, many terrible actions are not genocide. For this we have another legal category, "crimes against humanity." According to the 1998 Rome Statute of the International Court:

‘[C]rime against humanity’ means any of the following acts when committed as part of a widespread or systematic attack directed against any civilian population, with knowledge of the attack:

(e) Imprisonment or other severe deprivation of physical liberty in violation of fundamental rules of international law;

(h) Persecution against any identifiable group or collectivity on political, racial, national, ethnic, cultural, religious, gender as defined in paragraph 3, or other grounds that are universally recognized as impermissible under international law, in connection with any act referred to in this paragraph or any crime within the jurisdiction of the Court;

(i) Enforced disappearance of persons;

(j) The crime of apartheid;

(k) Other inhumane acts of a similar character intentionally causing great suffering, or serious injury to body or to mental or physical health.

It is not always easy to distinguish between genocide and crimes against humanity because one has to understand the "intent" of the perpetrators. Are they simply killing everyone who opposes them or is their intention to wipe out a particular group of people? To the people killed or forced to flee for their lives, this may be a distinction without a difference, but in the international legal system these distinctions do matter.

On Dec. 7, the U.S. Commission on International Religious Freedom (USCIRF) called on the U.S. government "to designate the Christian, Yazidi, Shi’a, Turkmen, and Shabak communities of Iraq and Syria as victims of genocide by ISIL."  (Although I am a member of the commission, this column does not necessarily reflect the views of the commission).

Whether victims of genocide or crimes against humanity, these people are being killed or chased out of their homes and countries. They clearly meet the definition of a refugee, who according to the 1951 Refugee Convention is someone "owing to well-founded fear of being persecuted for reasons of race, religion, nationality, membership of a particular social group or political opinion, is outside the country of his nationality and is unable or, owing to such fear, is unwilling to avail himself of the protection of that country."

Millions of Syrians and Iraqis have become displaced in their own countries or refugees fleeing for their lives. All who suffer persecution deserve our compassion and help. Singling out one group of refugees, say Christians, for special treatment is not consistent with either our American or Christian values. All refugees are our brothers and sisters deserving of our support.

Finally, the countries (Turkey, Lebanon, and Jordan) hosting the refugees also need help. Their ability to support millions of refugees is severely constrained by their lack of resources. Those Americans and Europeans who do not want refugees in their countries should especially support greater aid to the refugees in these host countries since the refugees are fleeing appalling conditions where they have no hope for their future.

Like the man beset by robbers whom the Good Samaritan found at the side of the road, Iraqi and Syrian refugees are in need of help. Will we walk on leaving them in the gutter or will we stop and help?