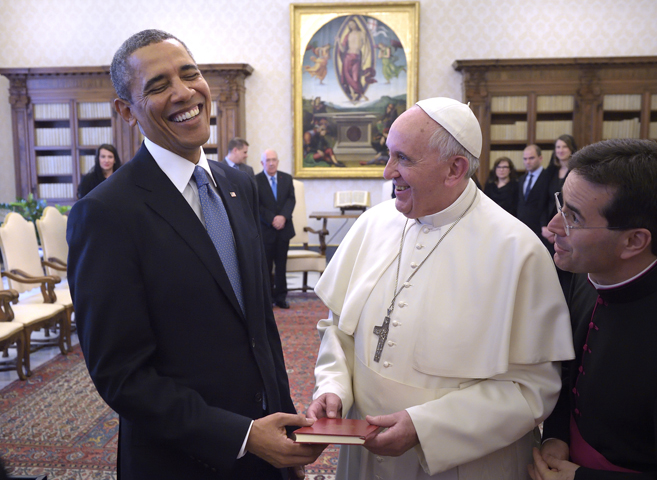 U.S. President Barack Obama shares a laugh with Pope Francis as he receives a copy of the pope's apostolic exhortation, "Evangelii Gaudium" ("The Joy of the Gospel"), during a private audience Thursday at the Vatican. (CNS/Stefano Spaziani, pool)

The meeting of President Barack Obama and Pope Francis went smoothly, even though there were a couple of bumps in the road. As is understandable, the media focused on the bumps while the Obama administration stressed areas of agreement.

When a president visits the Vatican, the Vatican's principal focus is international issues (Ukraine, Syria, the Middle East, Africa, refugees, religious freedom, etc.). But the Vatican also always wants to support local bishops when they are in conflict with their government.

This template was followed in the Obama visit.

In its press release following the meeting, the Vatican said the meeting was "cordial," and "views were exchanged on some current international themes." It was hoped that "in areas of conflict, there would be respect for humanitarian and international law and a negotiated solution between the parties involved."

The U.S. government and the Vatican would obviously agree on these issues, although in the past, the U.S. has been more eager to resolve international issues with military means than would the Vatican. Obama reversed his decision to bomb Syria after the pope called for a day of fasting and prayer for peace. The Vatican would also want to see more humanitarian and development aid than the Congress is willing to appropriate.

According to the Vatican, the discussion also expressed "the common commitment to the eradication of trafficking of human persons in the world." This was a major concern of Pope Francis when he was archbishop of Buenos Aires, Argentina. He has recently instituted a major interfaith effort against human trafficking in partnership with Al-Azhar University.

But the Vatican press release also noted that there was discussion on questions such as "the exercise of the rights to religious freedom, life and conscientious objection," which was a veiled reference to the contraceptive mandate in the Affordable Care Act. The U.S. bishops wanted this brought up, and not to have mentioned it would have left them out in the cold.

When asked by reporters if the pope brought up the Affordable Care Act, Obama said, "He did not touch in detail on the Affordable Care Act," but it was brought up by the Vatican secretary of state, Cardinal Pietro Parolin. With Parolin, "we discussed briefly the issue of making sure that conscience and religious freedom was observed in the context of applying the law," the president explained.

"Most religious organizations are entirely exempt," Obama said. "Religiously affiliated hospitals or universities or NGOs simply have to attest that they have a religious objection, in which case they are not required to provide contraception although that employees of theirs who choose are able to obtain it through the insurance company."

At the same time, he pledged "to continue to dialogue with the U.S. Conference of Bishops to make sure that we can strike the right balance, making sure that not only everybody has health care but families, and women in particular, are able to enjoy the kind of health care coverage that the AC offers, but that religious freedom is still observed."

The poor, growing inequality, and peace

In his meeting with the pope, Obama said, "The largest bulk of the time was discussing two central concerns of his. One is the issues of the poor, the marginalized, those without opportunity, and growing inequality. ... And then we spent a lot of time talking about the challenges of conflict and how elusive peace is around the world."

"The theme that stitched our conversation together," according to the president, "was a belief that in politics and in life the quality of empathy, the ability to stand in somebody else's shoes and to care for someone even if they don't look like you or talk like you or share your philosophy -- that that's critical. It's the lack of empathy that makes it very easy for us to plunge into wars. It's the lack of empathy that allows us to ignore the homeless on the streets.

"And obviously central to my Christian faith is a belief in treating others as I'd have them treat me," Obama continued. "And what's I think created so much love and excitement for His Holiness has been that he seems to live this, and shows that joy continuously."

The president said they also discussed immigration and "how I felt that there was still an opportunity for us to make this right and get a law passed." And as someone who came from Latin America, Francis "is very mindful of the plight of so many immigrants," Obama said.

The president acknowledged that "His Holiness and the Vatican have been clear about their position on a range of issues, some of them I differ with, most I heartily agree with." But he seemed very up on the pope. "I think he is shining a spotlight on an area that's going to be of increasing concern, and that is reduced opportunities for more and more people, particularly young people," Obama said.

"We need to come up with policies that provide a good education for every child and good nutrition for every child, and decent shelter and opportunity and jobs -- [Francis] is not going to get into details of it, but he reminds us of what our moral and ethical obligations are," Obama said.

Obama believes this is also "good economics and good national security policy. Countries are more stable, they're going to grow faster when everybody has a chance, not just when a few have a chance."

The pope, according to Obama, is "creating an environment in which those of us who care about this are able to talk about it more effectively. And we are in many ways following not just his lead but the teachings of Jesus Christ and other religions that care deeply about the least of these."

It is clear Obama sees an affinity between him and the pope. Others will emphasize the support the Vatican gave to the U.S. bishops in their fight with the Obama administration.

For the Vatican, it is possible to do both. The Vatican has over 1,000 years of working with kings, presidents and other heads of state. Unlike the U.S. Congress, the Vatican knows how to chew gum and walk at the same time. It can disagree with someone on some issues while working cooperatively with them on other issues.

The visit went pretty much as predicted. The photos and video of the visit showed a pope and president smiling and interacting in a cordial manner. The meeting went 52 minutes, almost twice the half-hour scheduled, which is always a good sign.

Obama gave the pope fruit and vegetable seeds from the White House garden, and the pope gave Obama a copy of his apostolic exhortation, Evangelii Gaudium ("Joy of the Gospel"). The president said, "I actually will probably read this in the Oval Office when I am deeply frustrated, and I am sure it will give me strength and will calm me."