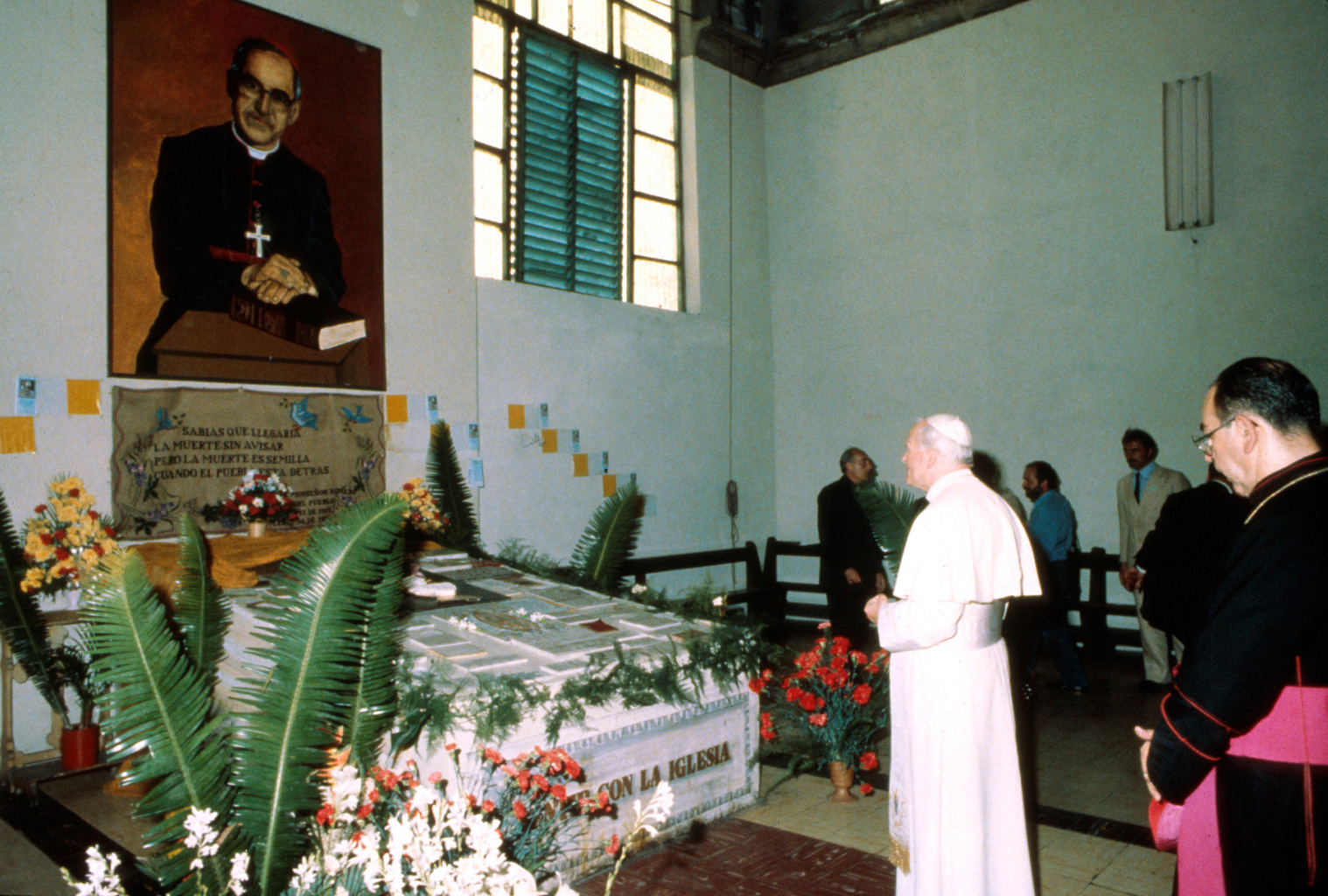 St. John Paul II prays before the tomb of Archbishop Oscar Romero in the San Salvador cathedral during his 1983 visit to the city. (CNS/Catholic Press Photo/Giancarlo Giuliani)

The decision of Pope Francis to designate Archbishop Oscar Romero a martyr comes after decades of controversy and debate within the church.

The archbishop was assassinated while saying Mass in 1980 just days after he had told Salvadoran soldiers to disobey their superiors if they were ordered to attack innocent civilians. The Salvadoran civil war (1979-92) would eventually claim some 75,000 lives.

When he was first appointed archbishop in 1977, he was considered a conservative who would not rock the boat. Seeing how his people and his priests were treated by the military changed him.

"After two years as archbishop of San Salvador, Romero counted 30 lost priests – killed, expelled or forced to flee from death." Archbishop Vincenzo Paglia, president of the Vatican Council for the Family and postulator of the cause for the beatification of Romero, told a Vatican press conference on Feb. 4, "The death squads killed scores of catechists from the base communities, and many faithful disappeared from these communities."

Three weeks after Romero's installation, his friend, Jesuit Fr. Rutilio Grande, was assassinated. After the Jesuit's death, the archbishop became an outspoken defender of human rights and the poor, and frequently denounced abuses by the military.

While today the Salvadoran hierarchy welcomes his designation as a martyr, Romero received little support at the time from his fellow bishops who were more worried about Marxist revolutionaries than military abuses.

Nor did he get support from the Vatican. Pope John Paul II knew little about Latin America and took advice from conservatives like Colombian Cardinal Alfonso López Trujillo and Cardinal Angelo Sodano, who as Vatican nuncio to Chile had been friendly with President Augusto Pinochet.

When Romero was killed, the common people immediately considered him a martyr and saint, but things are not so simple in the Catholic church. It required a lengthy procedure "that encountered many difficulties, on account of opposition due to both the archbishop's thought and pastoral action, and the situation of conflict that developed in relation to him," acknowledged Paglia.

The first step on that journey was the bestowal of the title Servant of God on Romero in 1997, after the civil war had ended and after the Berlin Wall had fallen. The political atmosphere had changed dramatically in 17 years. Pope John Paul II, who granted Romero the title, began to see him as similar to another famous bishop killed at the altar, St. Stanislaus of Krakow, Poland.

But movement on Romero's beatification continued to be blocked. Some in the hierarchy still opposed his activist strategy. Others feared that making him a saint would put in a bad light bishops who did not follow his example. Paglia gives credit to Pope Benedict XVI for unblocking the process shortly before he resigned, while Pope Francis made his beatification a priority.

Another reason the process was held up was because of debates over whether he technically qualified as a martyr or not. For some this was simply an excuse to block his beatification, but for others this was a real question.

Here is the problem. A martyr is someone killed because of hatred of the faith. The classic examples are Roman martyrs who refused to worship pagan gods and were thrown to the lions. Or there were Catholics who were killed by Protestants for refusing to join the Reformation.

The problem with this approach is that whether a person is a martyr or not depends on the motivation of the killer not the victim.

For Romero this means that if the people who had him killed did so because they considered him a political troublemaker, then he is not a martyr.

The critics would point out that the people who killed him were Catholics who had their children baptized and went to Mass on Sunday. In order for him to be a martyr, he must be killed out of hatred of the faith. Do these people hate the faith or simply hate Romero?

This is similar to the way we treat hate crimes in the United States. In order to be convicted of a hate crime, the prosecution has to prove that the attacker was motivated by hatred toward a person because of his or her race, religion, sexual orientation, etc. If that cannot be proven, then it could still be a crime (murder, assault, etc.), but not a hate crime.

One way out of this dilemma would be for the church to change the definition of martyr so that a martyr is defined more by his or her motivations rather than by the killer's. The killer may simply see the martyr as a threat to his or her political and/or economic power, but the person would qualify as a martyr if he or she is motivated by the Gospel to words or actions that inspire the violent reaction.

The Vatican, however, decided not to change the definition of a martyr. Rather, it expanded its definition of "the faith" that is hated to include the church's teaching on social justice.

"His death – as the detailed documentary examination clearly showed," asserts Paglia, "was not only politically motivated, but due also to hatred for a faith that, combined with charity, would not stay silent when faced with the injustices that implacably and cruelly afflicted the poor and their defenders."

In other words, the killers hated a faith that opposed injustice. For the Vatican, this was the best of both worlds. It declared Romero a martyr without having to change its definition of martyrdom.

The question of who is or is not a martyr has come up before. The most controversial "martyr" of the 20th century was Carmelite Sr. Teresa Benedicta of the Cross, also known as Edith Stein.

John Paul declared her a martyr, much to the consternation of the Jewish community. They argued she was killed in 1942 by the Nazis because she was Jewish, not because of her Christian faith. The Vatican argued that she was killed after Jewish Christians were rounded up because the Dutch bishops spoke out against Nazi racism.

Declaring her a martyr because of something the bishops did was a bit of a stretch, to put it mildly.

So why the push to declare people martyrs? Why not just skip over that and just make them saints?

The problem is that in order to be beatified, a person needs one miracle performed by God in response to prayers directed to the candidate, unless the person is a martyr. If you are a martyr, no miracle is required for beatification. A miracle is also required for canonization.

Thus a regular saint requires two miracles, while a martyr requires only one. Declaring a person a martyr eliminates the need for one miracle.

The last time the saint-making process was reformed, some argued for simply eliminating the requirement of any miracle. There is scientifically no way to verify a miracle; all science can do is say there is no scientific explanation for what happened.

Most miracles today are cures of diseases. Declaring a cure a miracle is fraught with problems. Could it have been a spontaneous cure that is coincidental with prayers to a saint but not caused by them? Could the cure have happened for reasons that are we are simply ignorant of today but might understand in 20 years? Then, there is every procurator's nightmare -- what do you do if the patient gets sick again and dies of the same disease after the miracle has been declared?

I would not argue for abandoning our traditional belief in miracles, but there is no theological reason for insisting on miracles as necessary for canonization. It is simply a rule. Popes have waived the rule for canonizations.

The church would be better off if it dropped the requirement of miracles. The focus should be on the life and teachings of the saints, not on what miracle they performed.

Under the current rules, Romero will need a miracle before he becomes a saint. Until then, he is Blessed Oscar Romero.

But perhaps his greatest miracle is the way in which he is now a unifying figure in the church, whereas in the past he was a source of division.

The poor were always on his side. The hierarchy and the Vatican are now on board. Liberation theologians, who are not all that big on popular devotions, now have a saint they can look up to.

The poor, the hierarchy, the Vatican, and liberation theologians all holding hands praying at the tomb of Blessed Romero, now that is a miracle.