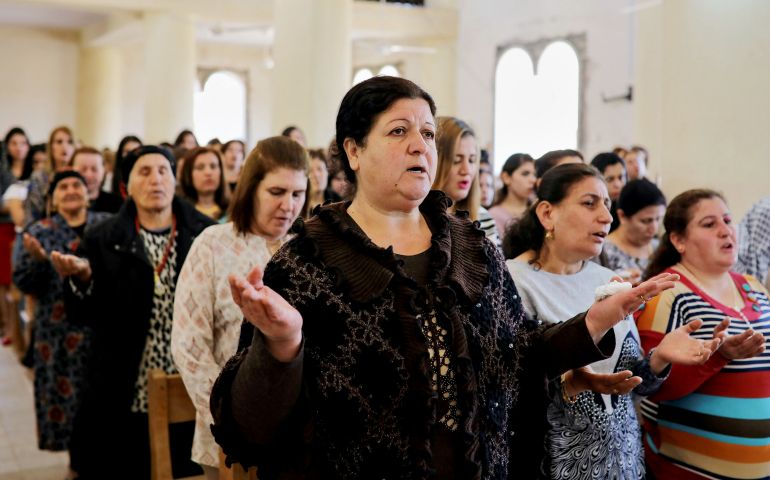 Religious believers continue to suffer persecution and discrimination in many parts of the world, according to the U.S. Commission on International Religious Freedom (USCIRF). In its annual report released April 26, the commission lists 16 countries where religious freedom violations are systematic, ongoing and egregious, and should therefore be designated "countries of particular concern" by the U.S. State Department. 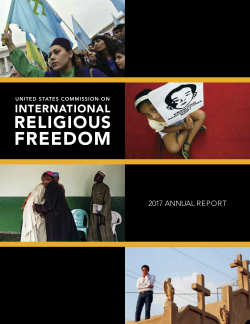 Ten of these countries are already so designated by the State Department: Burma, China, Eritrea, Iran, North Korea, Saudi Arabia, Sudan, Tajikistan, Turkmenistan and Uzbekistan. The commission recommends that six other countries be added to this list: Central African Republic, Nigeria, Pakistan, Russia, Syria and Vietnam.

Congress created the U.S. Commission on International Religious Freedom in 1998 to monitor threats to religious freedom abroad and to make recommendations to Congress, the president and the State Department. It is a bipartisan, nine-member commission with commissioners appointed by the president and leaders of both houses of Congress. Although I am chair of USCIRF, the views expressed here are my own and do not necessarily represent the views of the commission.

The commission's list of countries of particular concern has changed since its report a year ago. Added to the list is Russia and dropped from the list are Egypt and Iraq.

Russia saw a serious uptick in religious persecution in 2016 as the government not only increased its repression of religious freedom in its own territory but also expanded its repression into neighboring Ukraine, which it had invaded.

In 2016, Russia amended its already repressive laws that treat with suspicion any religious group not affiliated with state-controlled organizations. The religion law now broadly defines banned "missionary activities" to forbid preaching, praying, disseminating religious materials, and even answering questions about religion outside of officially designated sites.

According to the commission, the list of "dangerous" religious materials includes more than 4,000 items, "including many with no apparent connections to militancy, such as the Quranic commentaries of Ottoman-era Kurdish theologian Said Nursi and numerous Jehovah's Witnesses publications," including a children's book titled My Book of Bible Stories. Also banned as dangerous is a 1900 sermon by the Ukrainian Greek Catholic Archbishop Andrey Sheptytsky, who was declared venerable by Pope Francis in 2015.

The Jehovah's Witnesses have been banned by the state despite video recording showing the police planting incriminating evidence against them. Innocent Muslims in Chechnya, Dagestan and Crimea were also tried on fabricated charges of terrorism and extremism. Some have simply been kidnapped and disappeared.

Meanwhile, religious groups in Crimea have been forced to re-register under stringent Russian laws or lose their rights. As a result, the Kiev Patriarchate of the Ukrainian Orthodox Church has lost its worship space.

Russia has also cracked down on critics of these policies. Last year, the two most prominent domestic human rights groups that monitor freedom of religion or belief were officially branded as "foreign agents."

Although the situation in Iraq is far from ideal, the government is working harder at liberating minority religions being severely repressed, sometimes to genocidal proportions, by the so-called Islamic State. The Iraqi military is also trying to rein in Shiite militia groups that often treat badly Sunni civilians in the fight against the Islamic State group, although it has not been able to halt attacks on Sunni Muslims by the Iranian-backed Popular Mobilization Forces.

Meanwhile, the Kurdistan Regional Government in Northern Iraq has sheltered and protected religious minorities fleeing Islamic State territories, although there have been allegations of appropriation of Christian lands in Kurdish territories.

While no longer recommending "countries of particular concern" status for Iraq, the U.S. Commission on International Religious Freedom lists it as a Tier 2 country because of its serious religious freedom violations. There, it joins such countries as Afghanistan, Azerbaijan, Bahrain, Cuba, Egypt, India, Indonesia, Kazakhstan, Laos, Malaysia and Turkey.

The situation in Egypt is unusual because although the conditions for other human rights have gotten worse, the religious freedom situation has improved.

According to the commission, "President Abdel Fattah Sisi consistently condemned sectarian attacks and pressed for assistance for victims and accountability for perpetrators, pushed for reform in religious discourse, and attended a Coptic Christmas Eve mass for the third consecutive year." And he will soon be welcoming the pope to Egypt.

It is also significant that the grand sheikh at Al-Azhar, Ahmed el-Tayeb, has also condemned attacks against the Copts and is going to meet with Francis during his visit.

The Egyptian Parliament has also passed a law simplifying the process for approving the construction or repair of churches. The government has restored or completely rebuilt 50 churches damaged by extremists in 2013. Most importantly, it has begun arresting, prosecuting and jailing perpetrators of violence against Coptic Christians. It has also greatly reduced the number of persons charged with the crime of blasphemy.

Coptic Christians and other religious minorities still suffer badly, especially in Upper Egypt and North Sinai. They have suffered from sectarian mobs as well as suicide bombers affiliated with the Islamic State group, most recently at two churches on Palm Sunday. The government needs to provide tighter security for Coptic churches.

While no longer recommending Egypt for "countries of particular concern" status, the commission does include the country on its Tier 2 list. It also acknowledges Egypt's horrific human rights record in suppressing free speech, press and assembly.

Freedom to believe (or not believe)

Freedom to believe (or not believe) is a fundamental human right recognized by international treaties and covenants. You cannot have religious freedom without:

The question remains: How will the Trump administration respond to the repression of religious freedom around the world? Not surprisingly, other administrations have prioritized security and economic issues over human rights in our relations with other nations. President Donald Trump's emphasis on "America first" during his campaign made it look like he would not even give lip service to issues of religious freedom.

On the other hand, evangelicals and other religious groups that supported Trump take religious freedom very seriously, and perhaps he will listen to them. It was gratifying to hear Vice President Mike Pence speak of religious freedom during his recent visit to Indonesia.

The commission's report notes, "Many observers have become numb to violations of the right to freedom of thought, conscience, and religion." We cannot allow this to continue as regimes use "national security" as an excuse for cracking down on religious freedom. Rather, we need to call to task state-sponsored attacks on religious freedom as well as governments that look the other way when individuals and mobs attack religious minorities.

Whither the Middle East?