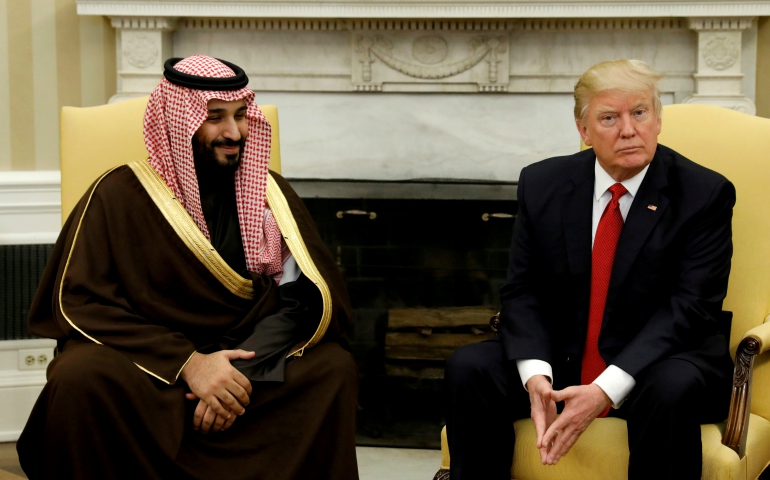 President Donald Trump's first foreign trip looks more like a pilgrimage than anything else — Rome, Jerusalem and Saudi Arabia. Let's hope someone explains to him that he cannot go to Mecca.

The first stop on his "hajj" is Saudi Arabia on Friday, May 19.

For the White House, this trip is all about political theater. Trump's staff wants him to look presidential after all of the disasters that have accompanied his first 100-plus days in Washington. That should not be difficult with all of the pageantry surrounding the visit. The Saudis will treat him like royalty. They will appeal to his tremendous ego, and he will love every minute of it. He will even have an opportunity to give a major speech on Islam and the need to confront radical ideologies.

So, what will happen behind closed doors?

For the Trump administration, the primary goals of diplomacy are improving U.S. national security and improving our balance of trade. Human rights, including religious freedom, will not be as much of a concern as it was during the Obama administration. This will please the Saudis, who are tired of being preached to by the Americans.

Trump will want to claim that the trip helped create jobs in the United States. The Saudi will undoubtedly purchase more weapons, which will please our military industrial complex, including defense workers who voted for Trump.

But discussions about national security issues will be even more important than trade talks. Both sides want to share intelligence and discuss strategy for dealing with common foes.

Saudi Arabia sees itself and the United States united by a common enemy — Iran. Unlike the Obama administration, there is little interest among Trump advisors in reaching out to Iran, which is fine with the Saudis.

The Saudis continue to fight a proxy war with Iran in Yemen, for which we are selling them weapons. Likewise, in Syria, the Saudis and the U.S. are united against the Iranian-backed Assad regime.

Although the Saudis were delighted to see the U.S. bomb the Syrian air base, the U.S. and Saudi Arabia are not completely on the same page in Syria. The U.S. is primarily focused on ISIS, while the Saudis want to get rid of Assad and his Iranian backers. The Saudis will be nervous about any Trump administration backroom negotiations with Russia that may leave Assad in place.

Since Trump's next stop is Israel, both sides will have plenty to say to each other about the Israeli-Palestinian conflict. Whether there will be a meeting of minds is doubtful, but the discussions may contribute to Trump's education on the complexities of the issue.

Islamic extremism will be another topic of discussion.

In the past, Saudi Arabia has been a major source of funding of Sunni extremism around the world, which is not surprising granted the privileged and powerful position of Wahhabism in Saudi society. The rise and continued place of the Saudi royal family in Saudi Arabia has been supported by the Wahhabi religious establishment, which holds very conservative views about the role of women and about other cultural issues, including everything from entertainment to religious freedom. Their view of Islam has been exported to Africa and Asia through the funding of conservative mosques and religious leaders, as well as the funding of satellite preachers.

Some of these leaders, however, proved uncontrollable, and they turned to violence. The Saudis could ignore this when the violence was aimed at non-Muslims and Shia, but not when it was directed at other Sunni Muslims, including themselves. In short, the Saudi elites have come to realize that some of those they supported and funded in the past adopted a form of extremism that even threatens them.

Today, the Saudi political leadership is being more careful about to whom it gives money, but some wealthy Saudis continue to fund extremist groups. An important priority in any discussions with the Saudi should be the defunding of extremism, not just by the government but also by individual Saudis.

Another goal of U.S.-Saudi negotiations should be the reform of Saudi educational materials, especially texts dealing with religion, history and social sciences.

In the past, these texts have indoctrinated negative stereotypes of Jews, Christians, Shia and other religious groups. The Saudis have been cleaning up this material, but more needs to be done to encourage interreligious tolerance and understanding. For future generations, this is extremely important not only in Saudi Arabia but all over the world where Saudi texts are used in education. The Saudis are open to this because they were embarrassed when it was discovered that ISIS was using their textbooks in the areas of Iraq and Syria that it controlled.

The Saudi government is in the process of reforming its educational system to prepare for a more diversified and less oil-based economy. It is using the best educational theories and practices it can find in America. It wants to develop a entrepreneurial workforce capable of participating in a knowledge-based economy. In addition, thousands of Saudi students, both men and women, have studied abroad and are bringing home new ideas that are changing Saudi society. Hopefully, Trump will be told that his anti-Muslim rhetoric is scaring Saudi and other Muslim students away from American universities. This is neither good for Saudi Arabia nor the United States.

The Saudi trip will provide the kind of political theater the White House desires. It will provide a safe stage for Trump's first trip abroad, as long as he stays on message and does not tweet something stupid. He will be shown as working to protect the U.S. from terrorism and as bringing home the jobs he promised his supporters. It will also help counter the charge that he is Islamophobic. "See, they love me!" But in the long run, all of that will matter little unless he can get the Saudis to truly cut back on the sponsoring of extremism with their money and educational materials.