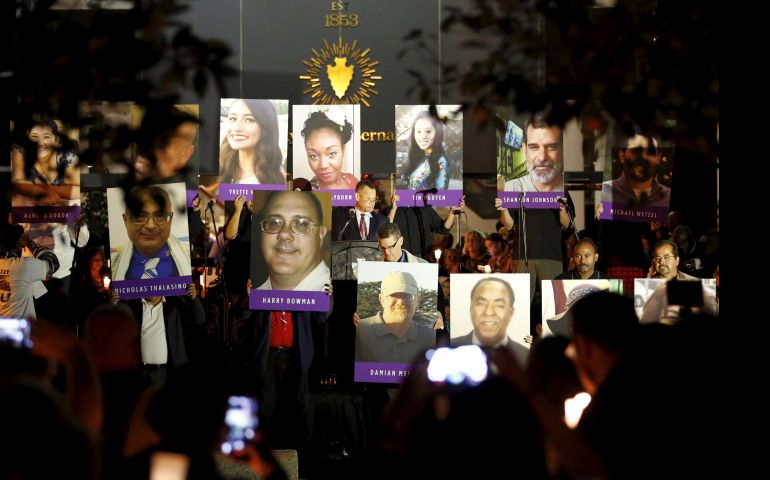 Posters of the 14 people killed in a Dec. 2 mass shooting at social services center in San Bernardino, Calif., are displayed during a Dec. 7 vigil in San Bernardino. (CNS/Reuters/Patrick T. Fallon)
This article appears in the Gun Violence feature series. View the full series.

This weekend, faiths across the nation will be participating in the annual National Gun Violence Prevention Sabbath Weekend.

Hosted by Faiths United to Prevent Gun Violence, the Washington National Cathedral, the Newtown Foundation and States United to Prevent Gun Violence, the groups are calling on the nation to "remember those who have lost their lives to gunfire, pray for those whose lives have been forever changed because of the loss of a loved one, and to educate one another on proven strategies to reduce gun violence," according to the website.

The website offers resources for places of worship to host their own vigil for various faiths, including Christianity, Buddhism, Judaism, Hinduism, Islam, Sikh and Unitarian Universalist.

In just three and a half years, NCR has published six editorials calling for common-sense gun control.

We have written about Faiths United's effort to curb gun violence and attended a multi-faith service in November centered on the theme of gun violence.

Commentary has also appeared at NCRonline, such as this recent Young Voices column: St. John of the Cross and our dark night of gun violence. Global Sisters Report has also reported on gun violence recently with a piece on the legality of gun ownership.

What can you do? Join the National Gun Violence Prevention Sabbath Weekend. Write your federal legislator and insist Congress enact laws for common-sense gun control. Use Twitter to say that you are advocating against gun violence, with #faithsunited and #gunviolence.

"Blessed are the peacemakers, for they will be called children of God." -- Matthew 5:9